First reported case of anthrax in wildlife in the Namib Desert: Infected zebra most likely causes death of 3 cheetahs 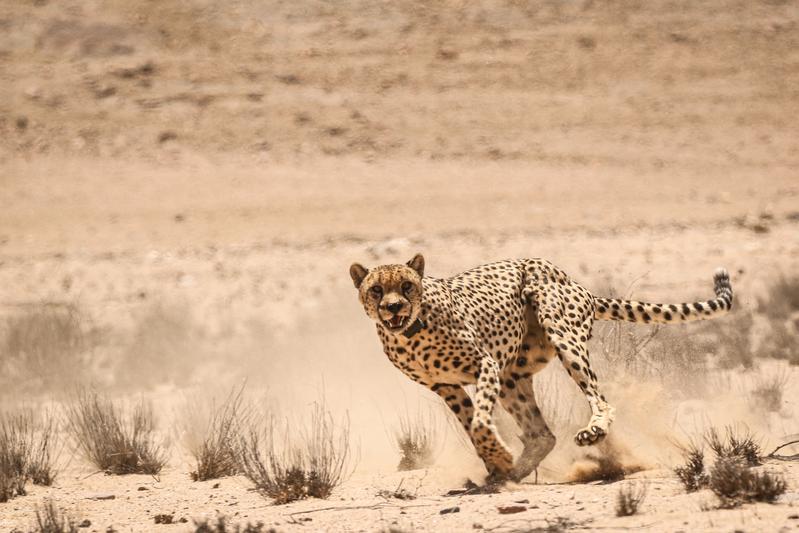 Anthrax is an infectious bacterial disease endemic in some parts of Africa. It affects people, livestock as well as wildlife. Using GPS telemetry data, a team of scientists from the Cheetah Research Project of the Leibniz Institute for Zoo and Wildlife Research (Leibniz-IZW) reconstructed a special case of anthrax infection in Namibia: Three free-ranging cheetahs in the Namib Desert died within 24 hours after feeding on a mountain zebra that tested positive for the disease. The zebra is the first described case of a wild animal infected with anthrax in this arid region. The case also shows that there might be previously unknown risks to cheetah populations in the desert.

It is described in detail in the scientific journal “Frontiers in Veterinary Science”.

Since 2015, scientists of the Leibniz-IZW Cheetah Research Project (CRP) conduct a National Cheetah Survey together with the Namibian Ministry of Environment, Forestry and Tourism (MEFT). The purpose is to obtain data on cheetah density and distribution across the country. Within this framework, a coalition of three cheetah males was captured in the Namib Desert and one animal equipped with a GPS collar. The recorded location and movement data were regularly downloaded during aerial tracking flights. On one of these flights, on October 5th 2019, the carcass of a collared cheetah – one of the members of the coalition – was located from the aircraft. During the following ground inspection, the other two cheetahs were also found dead. “The GPS data of the collared cheetah revealed that they died within a time window of six hours a few days before we found them”, says Ruben Portas, CRP scientist. “Evaluating their most recent movements, we identified a cluster of GPS locations approximately two kilometres away from the location where they were found dead.” At this spot the cheetahs spent 20 hours on the day before their death. When visiting this cluster, Portas found the carcass of an adult mountain zebra. The GPS and activity data from the collar suggested that the cheetahs fed on it. Bacillus anthracis, the cause of Anthrax infections, was isolated from buccal and nasal swabs collected from the dead zebra, making it the first confirmed anthrax infection in a wildlife species in the Namib Desert.

Carnivores are typically less susceptible to anthrax than herbivores. Cheetahs in particular have a high constitutive innate immunity which provides them with a rapid first line of defence against pathogens such as Bacillus anthracis. “However, when a high load of bacteria is ingested, for example with meat from a contaminated carcass, their potent constitutive innate immunity might be overloaded”, explains CRP project head Bettina Wachter. “Cheetahs scavenge only rarely, which reduces their exposure to anthrax infected prey. As a result, they do not produce high antibody titres, which would be another line of defence. Thus, cheetahs die quickly when infected, as studies in Etosha National Park in northern Namibia have shown.”

The pathogen was not detected in any of the three cheetahs found in the Namib, but the scientists consider it very likely that anthrax was the direct cause of their death. Bacterial cultures from highly susceptible animals that quickly die are often anthrax negative, because the animals might die already at a low presence of bacteria in the blood or from a high load of toxin released by Bacillus anthracis when destroyed by the immune system. Additionally, the vegetative form of the pathogen only develops when exposed to air quickly after the death of the host. The cheetahs were untouched for 11 days after their death and their bodies were not opened by scavengers, which might also explain the negative results of the lab tests for anthrax.

Anthrax is an unstudied disease in arid habitats. When wildlife dies in the Namib Desert, causes are often attributed to drought, hunger and the challenging desert conditions. “The few reported cases in which diseases such as anthrax were tested in the arid environments of Namibia are when livestock or people were directly affected”, says Portas. “We do not know the prevalence of anthrax in the Namib desert and how wildlife populations are affected by the disease. For other habitats, such as the Etosha National Park, there is a large body of research showing that anthrax has a key ecological role in the environment.”

This first confirmed case of anthrax in the Namib Desert in wildlife demonstrates that the disease might by endemic in the desert and other arid environments. Most of the Namib Desert is included in protected areas where cheetahs and other species find an important refuge from conflict with humans. Thus, this new knowledge may be important for assessing risks to the species. “Although few data are available, no other disease has shown such an impact on the cheetah population and certainly requires further research that may lead to appropriate conservation measures”, Wachter concludes. “This study shows that data recorded by GPS collars have the potential to disclose additional important information in addition to spatial movement information.”