Hungry or full: It comes down to the atomic details 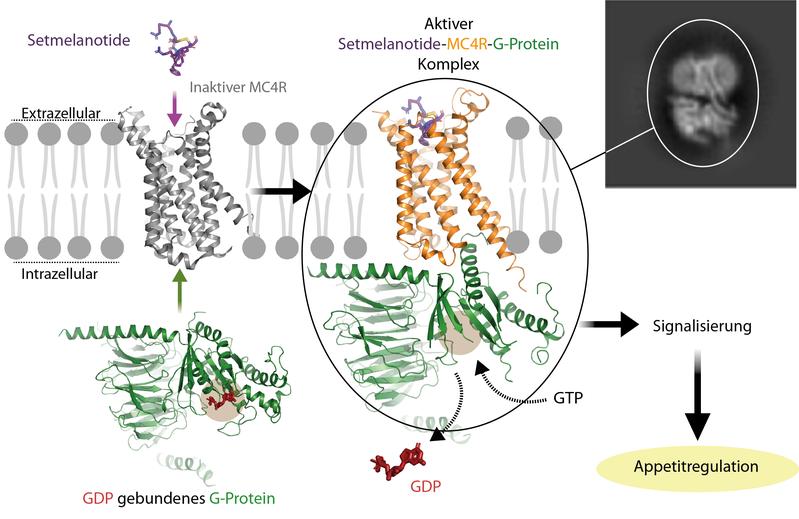 Insight into the molecular structure of an appetite-regulating cell receptor

A protein - measuring just a few nanometers in size - acts as a molecular switch with a crucial role in determining whether we feel hungry or full. By determining of the protein’s 3D structure, researchers from Charité – Universitätsmedizin Berlin were able to visualize the molecular structures of the hormones with which this protein – melanocortin 4 receptor (MC4R) – interacts. Writing in Cell Research*, the researchers report that this enabled them to describe the molecular mechanisms involved in the receptor’s activation and inhibition.

These new findings could stimulate the development of optimized drugs to treat patients with severe overweight and obesity patients. Studies exploring the nature of weight control ‘switches’ are more important than ever. We need to be able to treat genetic disorders that result in an inability to feel satiety after eating and which, even in young sufferers, cause severe and difficult-to-treat obesity. At the same time, obesity is one of the most pressing global challenges. Estimates suggest that 1.6 billion adults and 650 million children worldwide are classified as overweight or obese. The condition is associated with an increased risk of comorbidities such as cardiovascular disease and diabetes mellitus. Steadily increasing incidence rates and long-term consequences are driving global research efforts to decipher the mechanisms of appetite regulation at the molecular and ultimately at the atomic level. In addition to exploring the impact of genetic defects on appetite and hunger, research efforts also focus on finding potential targets for drug interventions.

In their recently published study, the team led by Dr. Patrick Scheerer, Head of Protein X-ray Crystallography and Signal Transduction (Scheerer Lab) at Charité’s Institute of Medical Physics and Biophysics, focused on one of the key players in hunger (and therefore weight) control in humans: the melanocortin 4 receptor (MC4R). Primarily found in the brain, this receptor protein is controlled by hormones that produce important satiety signals by binding to it. Activation of MC4R by stimulating hormones (α-/-MSH) results in the feeling of satiety. Conversely, inhibition by the hormone’s natural antagonist, known as Agouti-related protein (AgRP), results in increased hunger feeling. Genetic defects resulting in the functional impairment of this protein ‘switch’ often led to mild or even severe obesity in humans. Prof. Dr. Peter Kühnen, physician-scientist at the Institute of Experimental Pediatric Endocrinology, specializes in the treatment of patients with genetically induced impairments in the transduction of satiety signals. As part of his search for new treatment options for these types of obesity, the endocrinology specialist has devoted extensive efforts to studying the signaling pathways underlying human body weight regulation. He has also explored mutations in the genes encoding the relevant cellular messengers and receptors and analyzed the potential of drugs that might be able to replace individual messengers.

The drug-based treatment of pathologically increased appetite continues to face the same challenge: “To date, all of these pharmacological interventions have been dogged by side effects. These range from abnormal darkening of the skin – the hormone melanocortin also being responsible for skin and hair pigmentation – to cardiovascular events,” says Prof. Kühnen, who was also involved in the current study and whose work supporting the development of new, low-side-effect drugs was awarded the Paul-Martini Prize in 2020. “The reason for these undesirable side effects lies in the nature of the currently available drugs,” explains study lead Dr. Scheerer. He adds: “Instead of addressing a single target, they are usually directed at a range of receptors from the same family which, unfortunately, play different roles in our bodies. The more we know about the interactions between the components involved, the easier it will be to target interventions.” The teams led by Dr. Scheerer and Prof. Kühnen work closely together. In addition to sharing a common interest in the translation of research findings into clinical practice, their endeavors also complement the work of the DFG-funded Collaborative Research Center ‘Structural Dynamics of GPCR Activation and Signaling’ at Leipzig University. Charité is involved in four of the Collaborative Research Center’s subprojects.

As part of the current study, the researchers were able to elucidate and visualize the 3D molecular structure of the hormone receptor MC4R, a member of the G-protein-coupled receptor (GPCR) family. Given that the protein’s tiny size is expressed in nanoscale dimensions, conventional optical methods were inadequate for the task. “Using a state-of-the art imaging technology known as cryo-electron microscopy, we were able to visualize the receptor’s three-dimensional structure at a resolution of around 0.26 nanometers” says the study’s first author, Nicolas Heyder, a researcher at the Institute of Medical Physics and Biophysics. “We visualized the structures of two receptor-effector complexes, both of which contain the G-protein which is coupled to the receptor inside the cell. The differences between the two complexes are due to their being bound to two different hormones, namely setmelanotide and NDP-α-MSH. Both received their marketing authorization in the past two years, and both are stabilized by a calcium ion in the hormone binding pocket of MC4R.” In addition, the researchers found that the two receptor structures showed minor yet important differences in the way they bound both the drugs and the G-protein. “These molecular details provide important information on why and how various ligands – i.e., messenger molecules – exert specific effects on different MC4R signaling pathways. For a pharmacological intervention, this is of major importance,” says Nicolas Heyder.

This essential groundwork regarding the nature of the tiniest cell components would not have been possible without cryo-electron microscopy and many years of experience in establishing cell culture-based protein production. Both have been subject to ongoing optimization at Charité, thanks to collaborations with world-leading laboratories and experts, including Chemistry Nobel Laureate Prof. Dr. Brian Kobilka, a Stanford professor and an Einstein Visiting Fellow at the Berlin Institute of Health (BIH) at Charité. In their study results, the researchers describe previously unknown details regarding the mechanisms underlying melanocortin 4 receptor function: how it is activated, how it is blocked, and how the interaction between a hormone and the receptor protein produces a signal inside the cell. “We are now able to identify the smallest differences in the interactions between receptors and hormones. These could prove important for the continued refinement of new drugs which would previously have been associated with side effects,” says Dr. Scheerer. He adds: “Now that the precise structure of the hormone-binding pocket is known, it can be targeted directly.” This is key to the translational use of knowledge on both the endocrinological aspects (in this case hormone regulation) and structural characteristics of interacting proteins.

The research team was able to show that how a previously known receptor-deactivator – or antagonist – binds to the receptor almost identical to the receptor-activating agonist, with only one significant difference. “This difference pinpoints the precise site that blocks the receptor, and which contains a sensitive switch that is responsible for activating the protein,” explains Dr. Scheerer. The researchers hope that additional research to improve their understanding of the MC4R signaling system will enable them to identify potential sites for targeted interventions. As a next step, the researchers hope to understand how additional factors might be controlling the receptor at the molecular level. Some of the directly interacting factors have already been identified. Their impact, however, remains to be elucidated.

About this study
This research was made possible thanks to funding provided by the German Research Foundation (DFG) through the Collaborative Research Center 1423 (CRC 1423) ‘Structural Dynamics of GPCR Activation and Signaling’. The research received additional support through the Excellence Cluster ‘Unifying Systems in Catalysis (UniSysCat)’, the Collaborative Research Center ‘CRC 1365’ (DFG) and the Berlin Institute of Health (BIH) at Charité.