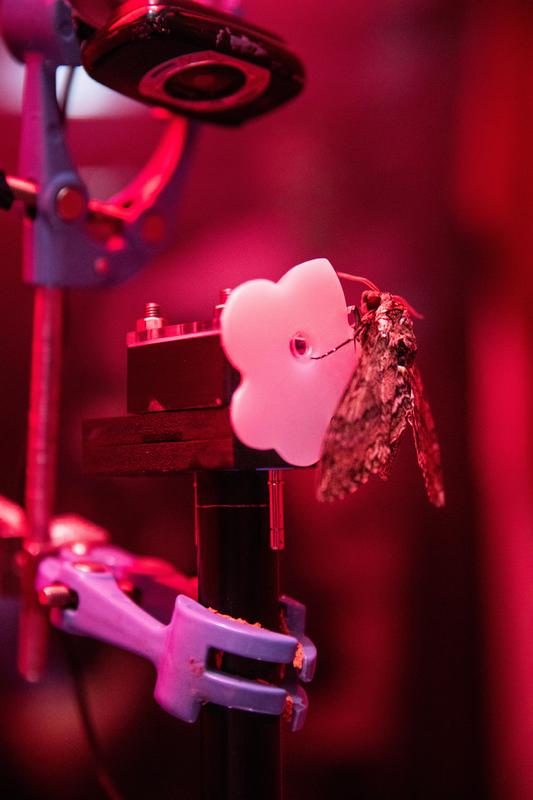 Max Planck researchers have gained new insights into the learning ability of tobacco hawkmoths. Learned odors influence the moths' preferences for certain flowers and host plants. One single deposited egg on a certain plant is sufficient for the moth’s choice to visit the same plant species again even after 24 hours. Olfactory sensory cells on the proboscis, on the other hand, play no role in learning.

Max Planck researchers have gained new insights into the learning ability of tobacco hawkmoths. In two recent publications, they report that learning odors does not only play a role in foraging, but that female moths are also influenced by previously learned odors when choosing a host plant to lay their eggs (Journal of Chemical Ecology doi: 0.1007/s10886-021-01309-3). In this context, a single deposited egg on a certain plant is sufficient for the moth’s choice to visit the same plant species again even after 24 hours. In contrast, the moth's second nose, the tip of the proboscis on which olfactory sensory cells have also been identified, does not appear to play a role in learning odors and making odor-guided foraging decisions. (Journal of Experimental Biology, doi: 10.1242/jeb.242780). The results provide clues to the adaptability of these insects to their environment.

In an earlier study, scientists led by Bill Hansson and Markus Knaden from the Department of Evolutionary Neuroethology were already able to show that tobacco hawkmoths can learn odors as cues to a nectar source that they had initially perceived as unpleasant (see https://idw-online.de/de/news753547). The insects had been found to be highly adaptive with respect to food sources. In the present study, the researchers wanted to know whether learning also affects egg-laying. In behavioral experiments, they first gave female tobacco hawkmoths the choice of laying their eggs on a leaf of either the wild tobacco species Nicotiana attenuata or sacred datura Datura wrightii. Naïve moths, which had not previously laid an egg on a plant, showed an innate preference for the leaves of sacred datura. In a second set of experiments, inexperienced females were trained on either tobacco or datura leaves, meaning that the moths had no choice but to lay their eggs on only one of the two plant species. In a third step, the researchers wanted to know whether this training had any effect on selecting one plant over the other. "We were very surprised to observe that even a single egg-laying experience was sufficient to direct a moth’s interest to the very plant on which an egg had previously been laid. Tobacco hawkmoths learned this plant even when only one leaf was available for oviposition and the experience was thus decoupled from the flower as a nectar source," first author Nandita Nataraj summarizes the results. Apparently, successful oviposition is in itself rewarding to the moth and influences future behavior.

Overall, the experiments revealed that the preference for tobacco decreased more significantly after 24 hours than the preference for datura, whose leaves they prefer naturally. Innate preference combined with success learning appears to be an evolutionary advantage that allows the heavy insect, which expends a lot of energy flying and hovering, to lay its eggs more efficiently and thereby save resources. It is also better protected from predators if it does not have to search for host plants for a long time.

Tobacco hawkmoths learn scents with their antennae, but not with their second nose: the tip of their proboscis

Tobacco hawkmoths do not only learn host plants for more efficient egg laying, they also remember flower odors that lead them to a nectar source while foraging. Tobacco hawkmoths detect olfactory cues that guide them to a flower with their antennae. However, in a 2016 study, Markus Knaden's team had found that olfactory neurons on the tip of the proboscis represent a second nose in tobacco hawkmoths (see https://idw-online.de/de/news653154). Therefore, the researchers now wanted to know whether the moths can also learn odors with this additional olfactory organ.

"The biggest challenge for our study was the design of an artificial flower that retains the odor inside and does not emit it. If the odor were also perceptible outside the flower, we would not have been able to distinguish between odor learning with the antennae and with the proboscis," says first author Elisabeth Adam, describing the special feature of the experimental setup. In their natural environment, the crepuscular insects also follow visual cues. The scientists therefore developed a flower made of blue acrylic that reliably attracted moths even without emitting an odor.

The behavioral experiments in the wind tunnel revealed that tobacco hawkmoths do not learn odors that they perceive only with their proboscis. Previous experience with specific odors within the flower therefore did not alter foraging behavior. "We know from previous studies that higher brain regions are involved in learning. Maybe the role of the proboscis is more that of a tactile or gustatory organ to evaluate the quality of a flower. It therefore presumably perceives odors differently and does not pass odor information on to higher brain regions," Elisabeth Adam explains the results.

The tobacco hawkmoth Manduca sexta: an ideal model to study the effects of learning on odor-guided behavior in an insect

Tobacco hawkmoths exhibit many complex behaviors even under laboratory conditions. Following a plume indicating flower nectar, or distinguishing between host and non-host plants to lay their eggs to ensure that they offspring can thrive, are behaviors that are of particular ecological interest. "We already know a lot about olfaction in this insect, in particular which brain regions are involved in the transmission and processing of olfactory cues. The moths are therefore ideal models to study odor perception and learning - from the detection of an odor molecule via neuronal processing to the resulting behavior," summarizes study leader Markus Knaden.

Further studies will now address the questions of whether tobacco hawkmoths can also learn to lay their eggs on plants that do not belong to their host range and whether they can also learn a variety of different flowers and host plants. Additional experiments will also examine how the moth uses the olfactory neurons on its proboscis to evaluate flower odors.