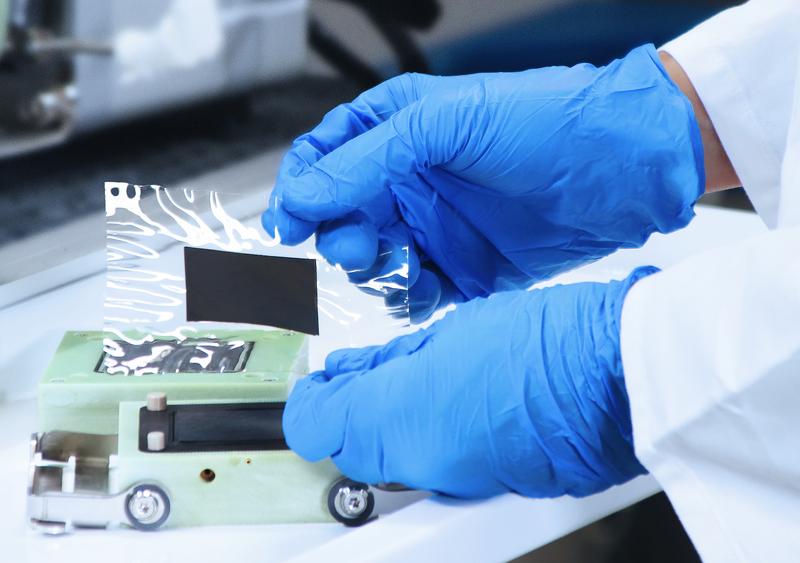 Fuel cells are typically applied to generate electrical energy from hydrogen or methanol. Nanoscale catalysts get the process going - but until now, the quality of these materials has varied significantly. The CAN research division of the Fraunhofer Institute for Applied Polymer Research IAP eliminated these problems: With an optimized catalyst and continuous, reproducible production process with very good control over the material properties.

Hydrogen is a future issue - H2 drives, for example, are intended to complement electromobility in a meaningful way. Fuel cells help to convert the chemical energy stored in hydrogen or methanol into usable electrical energy, i.e. to generate electricity. Nanoscale catalysts based on platinum are used to achieve this at manageable temperatures and with a reasonable energy input. Previous methods for their production are based on batch syntheses and allow only insufficient control over size, shape and composition of the particles. However, these parameters have a strong impact on the catalysis process. Nanoparticles are especially suitable as catalysts because they have a large surface area in relation to the amount of material used. Their use therefore saves material and thus costs. The problem is the quality of conventional catalyst materials can vary greatly.

Scientists in the Fraunhofer IAP’s research division CAN have now developed stable and efficient catalysts and optimized their production process – in the HiKAB project, short for "Hierarchical Composite Nanoparticle Systems for Application in Fuel Cells", funded by the German Federal Ministry for Economic Affairs and Energy BMWi (FKZ 03ET1435A). "We have converted the batch process into a continuous production process," says Dr. Christoph Gimmler, department head at Fraunhofer IAP. "In doing so, we rely on a bottom-up process – building up the nanoparticles atom by atom. In this way, we can not only produce nanoparticles with consistent, high quality via synthesis guidance, but also selectively adjust size, type and composition of the catalyst particles." In the reactor that the research team developed and built, this synthesis process runs continuously – especially the critical nucleation phase. What's special: The team has separated the nucleation phase spatially and temporally from the growth phase; in this way, the reaction temperatures, for example, can be well controlled. This enables very good reproducibility of the process and the properties of the material produced. The researchers have also optimized the catalyst material itself. "We have replaced part of the platinum with a less noble and thus less expensive metal," Gimmler specifies. This not only has a positive effect on material costs, but also allows the catalyst to work more efficiently and increases its service life.

The proof of concept has already been provided: The researchers have tested the produced catalysts in direct methanol fuel cells – with success. In long-term tests, they will now analyze exactly how much the new materials and the optimized production process have to offer in terms of cost savings. From initial measurement results, it is clear that the catalysts developed are also highly interesting for hydrogen fuel cells.


Analyzing materials at the systemic level

So far, the catalyst materials developed by the research team in the HiKAB project could only be tested electrochemically. In the ProkAB project, short for "Processing and Characterization of Catalytically Active Nanoparticles for Application in Fuel Cells," which is funded by the Authority for Science, Research, Equality and Districts (BWFGB), the Fraunhofer IAP has therefore now established a fuel cell test rig for routine measurements. "We have expanded our characterization spectrum and are now able to test the materials we develop at the fuel cell level," Gimmler reports. "This allows us to perform the litmus test, so to speak – after all, even more parameters play a role at the system level than in the laboratory." The Fraunhofer IAP thus offers expertise not only in materials development but also in the characterization of fuel cells.

Hydrogen research at the Fraunhofer IAP

The development of stable and efficient catalysts for fuel cells is one of the activities pursued at Fraunhofer IAP as part of the hydrogen strategy. "With our research, we are driving forward the use of renewable energies. In addition to catalysts and membranes for fuel cells, the focus is also on innovative materials that make it possible to generate and store hydrogen. For example, our lightweight construction experts are currently working with partners to develop a small and efficient wind turbine that can be used to produce hydrogen, as well as lightweight tanks in which hydrogen can be safely stored," explains Fraunhofer IAP Director Prof. Alexander Böker.