European Labour Market Barometer: higher than before the crisis despite fourth damper in a row 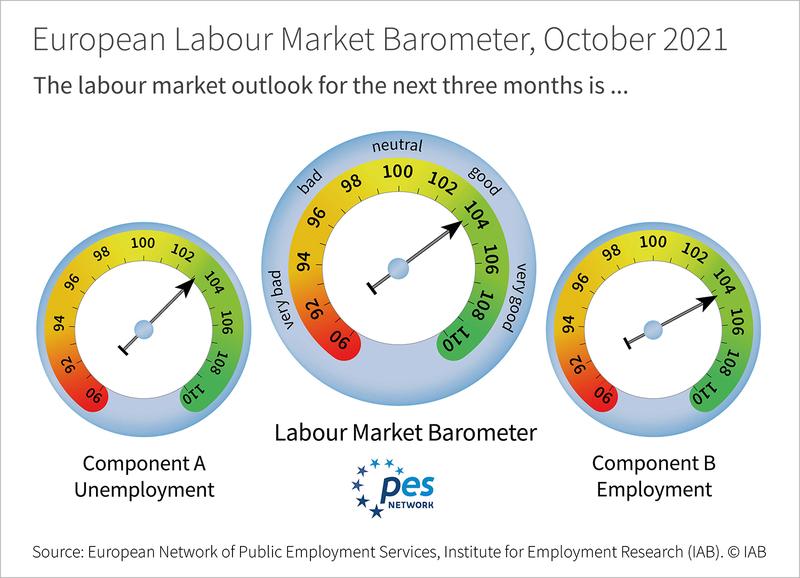 In October, the European Labour Market Barometer fell for the fourth time running, dropping by 0.7 points compared with September to 103.1 points. Although this means that the labour market leading indicator of the European Network of Public Employment Services and the Institute for Employment Research (IAB) is no longer very high, it still remains at a high level and continues to signal an improvement in the labour market situation in the European states, albeit at a slower pace.

“The European labour markets are continuing to recover from the COVID crisis, but difficulties are becoming noticeable, including the global supply bottlenecks and the number of COVID-19 infections, which are rising rapidly again in some places,” reports Enzo Weber, IAB head of forecast. “At the moment, the changes in Europe are very heterogeneous. The same number of countries have a falling barometer as have one that is rising,” says Weber.

The European Labour Market Barometer’s sub-indicator for the development of unemployment figures falls by 1.2 points compared to September and stands at 102.1 points in October. This shows that the number of unemployed will continue to fall in future but will do so more slowly. The sub-indicator for future employment growth drops slightly by 0.2 points to 104.1 points. The outlook regarding employment still remains positive but is no longer as good as it was up until the middle of 2019. The value for the employment component continues to lie higher overall than the value for the unemployment component.

The European Labour Market Barometer is a monthly leading indicator based on a survey of the local or regional employment agencies in 17 participating public employment services. The survey has been carried out jointly by the employment services and the IAB since June 2018. The participating countries include Austria, Bulgaria, Cyprus, the Czech Republic, Denmark, Belgium-DG, Belgium-Flanders, Germany, Iceland, Liechtenstein, Lithuania, Luxembourg, Malta, Poland, Portugal, Switzerland and Belgium-Wallonia. While component A of the barometer signals the development of the seasonally adjusted unemployment figures for the next three months, component B forecasts employment trends. The average of the components "unemployment" and "employment" constitutes the total value of the barometer. This indicator thus provides an outlook on the overall development of the labour market. The scale ranges from 90 (very poor development) to 110 (very good development). First, a barometer score for each of the participating employment services is determined. The European barometer is then derived from these national scores in the form of a weighted average.

The time series of the European Labour Market Barometer, including its components for all 17 participating employment services, is available at http://www.iab.de/Presse/elmb-components.

More information on the European Labour Market Barometer is available at http://doku.iab.de/kurzber/2020/kb2120.pdf.