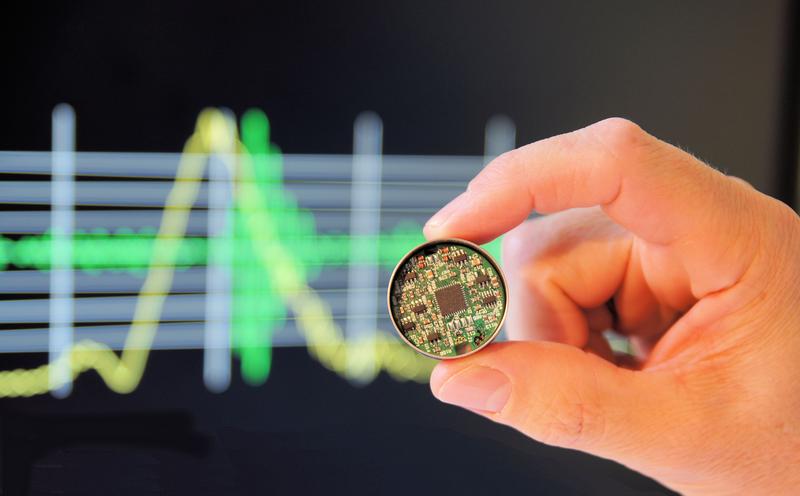 Implants can actively support the body, as in the case of pacemakers, neuro-prostheses or cochlear implants. In the future, active implants will be smaller, less energy-intensive and, above all, more patient-friendly. This is why the Fraunhofer Institute for Biomedical Engineering IBMT is working on miniaturization, external power supplies and wirelessly networked implants. The latest developments will be presented at COMPAMED/MEDICA in Düsseldorf from November 15 to 18 (Hall 13, Stand D60).

While dental implants “just” replace the tooth and help to chew food in the same way as the original, other implants actively support the body and are therefore called “active implants”. One well known example is the pacemaker, which is implanted in the chest area under the patient’s skin and emits pulses to stimulate the heart rhythm when it becomes too slow. The energy it needs is supplied by a battery. However, there are some innovative therapies in development that could use small implants to replace some drug-based therapies – these will require tiny implants that use very little energy. The major goal is to provide maximum care and personalized therapy for the patient.

Scientists at the Fraunhofer IBMT are supporting manufacturers with their huge expertise gained over 20 years of work on active implants. The latest developments from the Fraunhofer IBMT can be seen at the COMPAMED/MEDICA trade show being held from November 15 to 18 in Düsseldorf (Hall 13, Stand D60). “We’re not just a technology partner but a system provider for the design and development of active implants,” says Andreas Schneider-Ickert, Project Manager and Innovation Manager at the Fraunhofer IBMT. “Ultimately, we work on the miniaturization of implants as well as on biocompatibility and long-term stability, power supply, near-sensor signal processing, alternative stimulation methods and implant networks,” adds Group Manager Roman Ruff.

One example is prosthetic hands, which can be used by people who have lost a hand or an arm to allow them to grasp objects – by opening and closing their “hand” – and to rotate their hand. The future will see the addition of significantly greater levels of freedom and the electrodes that are currently needed on the skin for these prosthetic hands to work will become passé. “We have developed flexible, implantable microelectrodes, for example in the ‘Theranostic Implants’ project,” says Roman Ruff. “We can place these electrodes inside the body and record useful signals directly from muscles or nerves.” These signals are then converted into movement of the prosthesis. “In the long term, patients with these prostheses will be able to feel a lot more like they have a naturally working hand, because they will be able to carry out much more complex movements. What’s more, feedback can be transferred through the implanted electrodes back into the peripheral nervous system. These trigger perceptions that can represent changes in gripping strength, for example. It will be significantly more intuitive for the wearer to control a prosthesis,” explains Ruff.

Energy transfer from outside: depth of penetration increased by a factor of two to three

Active implants require energy. With induction, this energy can be supplied from outside the body, but the depth of penetration into the body is limited. At greater implant depths, effectiveness is significantly reduced. “We have been able to increase the depth of penetration by a factor of two to three by transferring the energy into the body via ultrasound,” says Schneider-Ickert. This method can be used to supply implants encased in titanium, for example, that cannot be supplied using induction. Another advantage of energy supply and communication via ultrasound is security. While inductive or radio-based interfaces can be hacked, this is more difficult to do with ultrasound.

The scientists at the Fraunhofer IBMT are also working on the recently launched ”SOMA” European project with seven partners from five European countries to stimulate nerves via ultrasound as well. “If we could stimulate the peripheral nervous system via ultrasound from a greater distance to the nerve, using the implants would be even more patient-friendly,” explains Schneider-Ickert.

Another trend for the future of active implants is the use of networked systems comprising multiple highly miniaturized implants that coordinate with each other, rather than one central implant. The team of scientists at the Fraunhofer IBMT is working on this together with 16 partners in the innovation cluster “INTAKT” (from the German for “interactive microimplants”) funded by the German Federal Ministry of Education and Research BMBF. The main advantage of these networked systems is greater biostability. “The sensors and actuators can be directly integrated into the casing, which removes the need for sensitive cable connections,” explains Ruff. If an implant fails, these implants are also much easier to replace. In the development of platform technologies for networked active implants, the Fraunhofer researchers are pursuing three use cases. The first is a pacemaker for the gastrointestinal tract that uses distributed implants to facilitate or inhibit the intestine’s motility, i.e., ability to move actively. The second is a tinnitus suppressor that uses electrical stimulation to mask the ringing sound and make it less intrusive. The third is a gripping neuroprosthesis that can be used by paraplegics who have residual muscle activity to support them in performing arm movements, for example lifting a glass.