Writers, Writing, and Literary Milieus in Alexandria After the Revolution 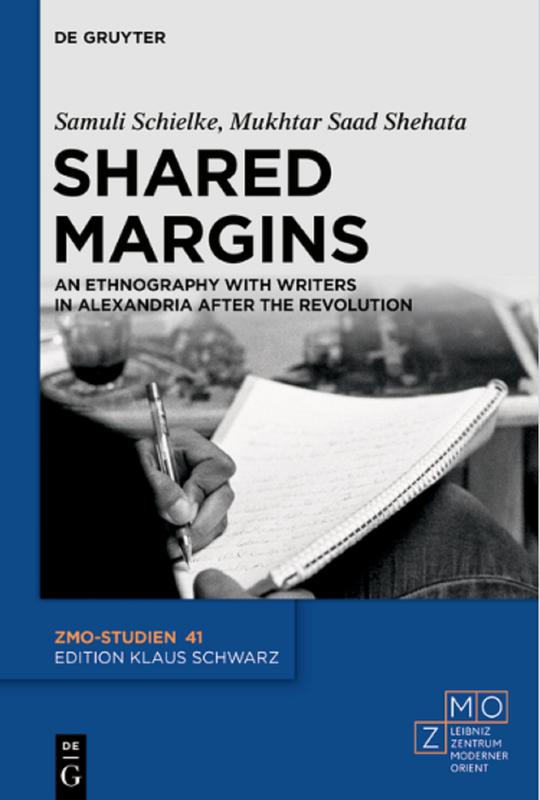 A new book by Samuli Schielke und Mukhtar Saad Shehata, “Shared Margins. An Ethnography with Writers in Alexandria after the Revolution” (De Gruyter 2021), explores spaces of literature and careers of writers in Egypt’s second city. It de-centres cosmopolitan avant-gardes and secular-revolutionary aesthetics that have been intensively documented and studied since 2011. Instead, it offers a fieldwork-based account of various milieus and styles. A public book presentation will take place on 8 November 2021 at 5 pm at Leibniz-Zentrum Moderner Orient in Berlin and online.

Literary texts are not the main object of study in “Shared Margins”. Instead, the authors highlight those parts of literature that are less accessible to a purely textual study: personal and social relations, motivations and careers, networks and circulations, which together constitute literature as a social institution.

The first part of the book, titled ‘About writing’ tells about literature as a social practice in different literary milieus of the city. Literary writing, the authors argue, has marginality as an at once enabling and limiting condition. It provides spaces of imaginary excess that may go beyond the taken-for-granted of a societal milieu, and yet are never unlimited.

The second part, titled ‘Writing about’ explores some key themes of writing that have been addressed: Alexandrian authors – revolution, urbanity, religious faith, doubts, and certainties. Taken together, they address a life-worldly experience of plurality in absence of pluralism: different ways of living, different visions of good life, and different literary aesthetics coexist in conflict, without mutual recognition. Literary imagination emerges as part and parcel of such social conflicts and transformations, its role being neither one of resistance against power, nor of guidance towards norms, but rather one of open-ended complicity.

“Shared Margins” offers an unprecedented tour through sites and themes of literary writing, from the beginnings and motivations of writing at homes and cafés, through the making and breaking of literary scenes across the city and the infrastructures of their imagination, to the parallel worlds that writers try to imagine and also to live in the protected spaces of literary gatherings. It tells of the optimistic moment of the January 25 Revolution when it seemed that poetry may change the world for the better. The book joins a conversation with authors and intellectuals who debate whether Alexandria really ever was such a beautiful cosmopolitan place as which many like to remember it today. The authors do not try to tell what literature is, but instead explore where it may be found, including hazy fringes of literature such as graffiti and social media posts, to which one chapter is dedicated. The book also pays closer attention to texts and their authors, zooming in on two poets whose work follows very different ethics and aesthetics, yet share a concern for the question of doubt and certainty. In conclusion, the book expands its focus from Alexandria to sites of literary exile, among them Berlin.

The anthropologist Samuli Schielke is a senior research fellow at Leibniz-Zentrum Moderner Orient (ZMO) since 2009. His current research explores imagination as a social practice and additionally literature. His other current research projects tell about migrants from Egypt in Western Europe and the Gulf states, and about humans, God, and destiny. The writer and independent researcher Mukhtar Saad Shehata has published several novels, short stories, and research essays in Arabic and Portuguese. He holds an MA degree in African and Indigenous Studies from the Universidade do Estado da Bahia.

“Shared Margins” was published in Leibniz-Zentrum Moderner Orient’s own series ZMO-Studien by De Gruyter. The publication was supported by the Leibniz Open Access Monograph Publishing Fund, and can be downloaded and read for free. A public book presentation will take place at Leibniz-Zentrum Moderner Orient in Berlin and online on 8 November 2021, 5 pm.