A natural CO2-sink thanks to symbiotic bacteria 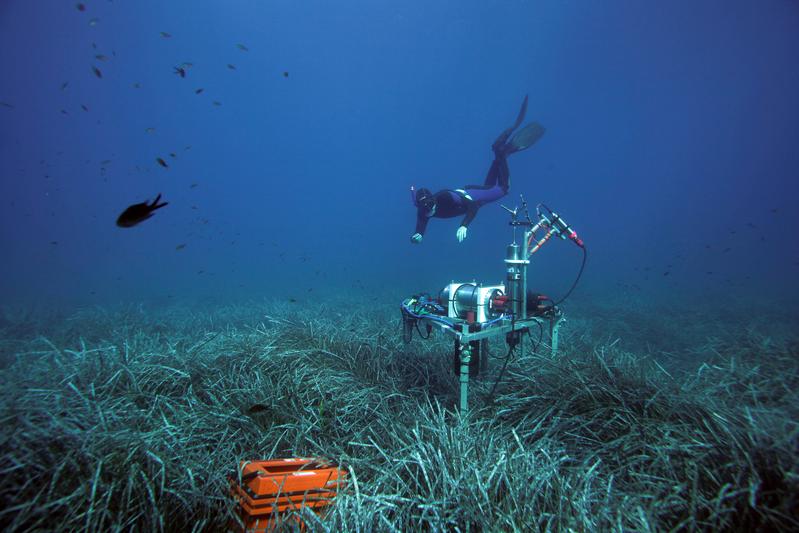 Seagrasses provide a vital habitat in shallow coastal seas. They also remove large amounts of CO2 from the atmosphere. Up to now, researchers have assumed that the plants take up nitrogen necessary for growth primarily from the seawater and sediment. However, in many regions where seagrasses thrive little nitrogen is available. Researchers of the Max Planck Institute for Marine Microbiology show that seagrass in the Mediterranean Sea lives in symbiosis with bacteria that reside in their roots and provide the much needed nitrogen. Such symbioses were previously only known from land plants.

Seagrasses are widespread in shallow coastal regions of both temperate and tropical seas, covering up to 600,000 square kilometers, which is roughly the area of France. They form the basis of the entire ecosystem, which is home to numerous organisms, some of them endangered species such as turtles, seahorses and manatees, and nursery ground for many economically important fish species. Moreover, seagrasses protect coastlines from erosion by storm surges and sequester millions of tons of carbon dioxide every year, which is stored in the ecosystem as so-called “blue carbon” for long periods of time.

Lush life despite a lack of nutrients

The habitat of many seagrasses is poor in nutrients, such as nitrogen, for much of the year. Although nitrogen is abundant in the sea in its elemental form (N2), seagrasses cannot use it in this form. How can the plants still thrive? It is thanks to their now discovered microscopic partners: Bacterial symbionts living within the plants roots that convert N2 gas into a form that the plants can use. Wiebke Mohr and her colleagues from the Max Planck Institute for Marine Microbiology in Bremen, Germany, Hydra Marine Sciences in Bühl, Germany, and the Swiss Water Research Institute Eawag now describe how this intimate relationship between seagrass and bacteria works.

Harmony in the roots

“It was assumed that the so-called fixed-nitrogen for the seagrasses comes from bacteria that live around their roots in the seafloor,” Mohr explains. “We now show that the relationship is much closer: The bacteria live inside the roots of the seagrass. This is the first time that such an intimate symbiosis has been shown in seagrasses. It was previously only known from land plants, especially agriculturally important species such as legumes, wheat and sugar cane.” These, too, have symbiotic bacteria, to which they supply carbohydrates and other nutrients in return for fixed nitrogen. A very similar exchange of metabolic products also occurs between the seagrass and its symbiont.

The bacteria that live in the seagrass roots are a new discovery. Mohr and her team named them Celerinatantimonas neptuna, after their host, the neptune grass (Posidonia). Relatives of C. neptuna have previously been found in association with seaweeds. “When the seagrasses moved from land to sea about 100 million years ago, they probably adopted the bacteria from the seaweeds,” Mohr speculates. “They virtually copied the system that was highly successful on land and then, in order to survive in the nutrient-poor seawater, acquired a marine symbiont.” The current study looked at seagrasses of the genus Posidonia in the Mediterranean Sea. However, such symbioses may also occur elsewhere. “Genetic analyses suggest that similar symbioses also exist on tropical seagrasses and in salt marshes,” says Mohr. “This way, these flowering plants manage to colonize a wide variety of seemingly nutrient-poor habitats, both in the water and on land.”

Going with the seasons

As the seasons change, the amount of nutrients present in coastal water varies. In winter and spring, the nutrients present in the water and sediment seem sufficient for the seagrasses. “At that time, we do find scattered symbionts in the roots of the plants, but they are probably not very active,” says Mohr. In summer, when sunlight increases and more and more algae grow and consume the few available nutrients, nitrogen quickly becomes scarce. Then the symbionts take over. They directly supply the seagrasses with the nitrogen they need. This is how seagrasses can reach their largest growth in summer, when nutrients are most scarce in the environment.

Many different methods for a clear picture

The present study bridges the entire ecosystem, from seagrass productivity to the symbionts that live in their roots and ultimately fuel the system. To accomplish this, the researchers used a variety of different methods to understand the symbiosis as fully as possible: Oxygen measurements carried out in the waters of the Mediterranean Sea revealed the productivity of the seagrass meadow. Microscopy techniques, in which individual bacterial species are color-labeled (known as FISH), helped to visualize the bacteria in and between the root cells of the seagrass. In the NanoSIMS, a state-of-the-art mass spectrometer, they showed the activity of the individual bacteria. Genomic and transcriptomic analyses revealed which genes are probably particularly important for the interaction and that these pathways are heavily used. As a result, the researchers succeeded in providing a sound and detailed description of this amazing collaboration. “Our next step is to study these new bacteria in more detail,” says Mohr. “We want to isolate them in the laboratory to further investigate how the symbiosis works and how it developed. It will certainly also be exciting to search for comparable systems in other regions and habitats.”

Anhang der PM
A part of Fetovaia Bay, in which most samples of this study were retrieved.
Instanz: