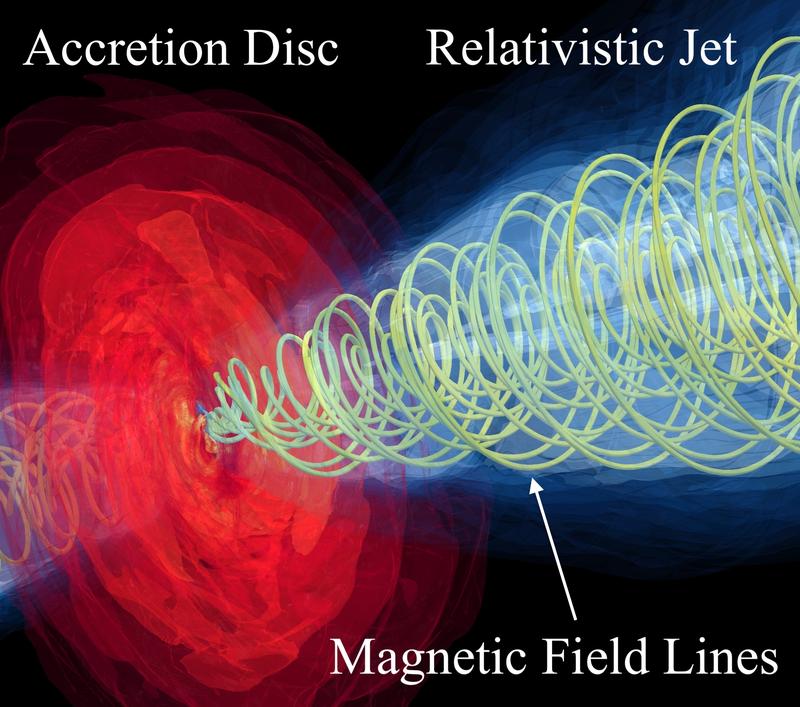 M87 Jet Simulation: Along the magnetic field lines, the particles are accelerated so efficiently that they form a jet out to scales of 6000 light years in the case of M87. | Quelle: Alejandro Cruz-Osorio | Copyright: Goethe University Frankfurt | Download

An enormous jet of particles emitted by the giant galaxy M87 can be observed astronomically in various wavelengths. Dr. Alejandro Cruz Osorio and Professor Luciano Rezzolla from Goethe University Frankfurt together with an international team of scientists has succeeded in developing a theoretical model of the morphology of this jet using complex supercomputer calculations. The images from these calculations provide an unprecedented match with astronomical observations and confirm Einstein’s theory of general relativity.

FRANKFURT. The galaxy Messier 87 (M87) is located 55 million light years away from Earth in the Virgo constellation. It is a giant galaxy with 12,000 globular clusters, making the Milky Way’s 200 globular clusters appear modest in comparison. A black hole of six and a half billion sun masses is harboured at the centre of M87. It is the first black hole for which an image exists, created in 2019 by the international research collaboration Event Horizon Telescope.

This black hole (M87*) shoots a jet of plasma at near the speed of light, a so-called relativistic jet, on a scale of 6,000 light years. The tremendous energy needed to power this jet probably originates from the gravitational pull of the black hole, but how a jet like this comes about and what keeps it stable across the enormous distance is not yet fully understood.

The black hole M87* attracts matter that rotates in a disc in ever smaller orbits until it is swallowed by the black hole. The jet is launched from the centre of the accretion disc surrounding M87, and theoretical physicists at Goethe University, together with scientists from Europe, USA and China, have now modelled this region in great detail.

The result was a model in which the values calculated for the temperatures, the matter densities and the magnetic fields correspond remarkably well with what deduced from the astronomical observations. On this basis, scientists were able to track the complex motion of photons in the curved spacetime of the innermost region of the jet and translate this into radio images. They were then able to compare these computer modelled images with the observations made using numerous radio telescopes and satellites over the past three decades.

Dr Alejandro Cruz-Osorio, lead author of the study, comments: “Our theoretical model of the electromagnetic emission and of the jet morphology of M87 matches surprisingly well with the observations in the radio, optical and infrared spectra. This tells us that the supermassive black hole M87* is probably highly rotating and that the plasma is strongly magnetized in the jet, accelerating particles out to scales of thousands of light years.”

Professor Luciano Rezzolla, Institute for Theoretical Physics at Goethe University Frankfurt, remarks: “The fact that the images we calculated are so close to the astronomical observations is another important confirmation that Einstein’s theory of general relativity is the most precise and natural explanation for the existence of supermassive black holes in the centre of galaxies. While there is still room for alternative explanations, the findings of our study have made this room much smaller.”

Images for download / Captions:
(1) https://cloud.itp.uni-frankfurt.de/s/HWdLZa8TEweNZ5R
The theoretical model (theory) and the astronomical observations (observation) of the launching site of the relativistic jet of M87 are a very good match. Credit: Alejandro Cruz-Osorio

(2) https://cloud.itp.uni-frankfurt.de/s/6WMxxH7GGzkxBcq
Along the magnetic field lines, the particles are accelerated so efficiently that they form a jet out to scales of 6000 light years in the case of M87. Credit: Alejandro Cruz-Osorio