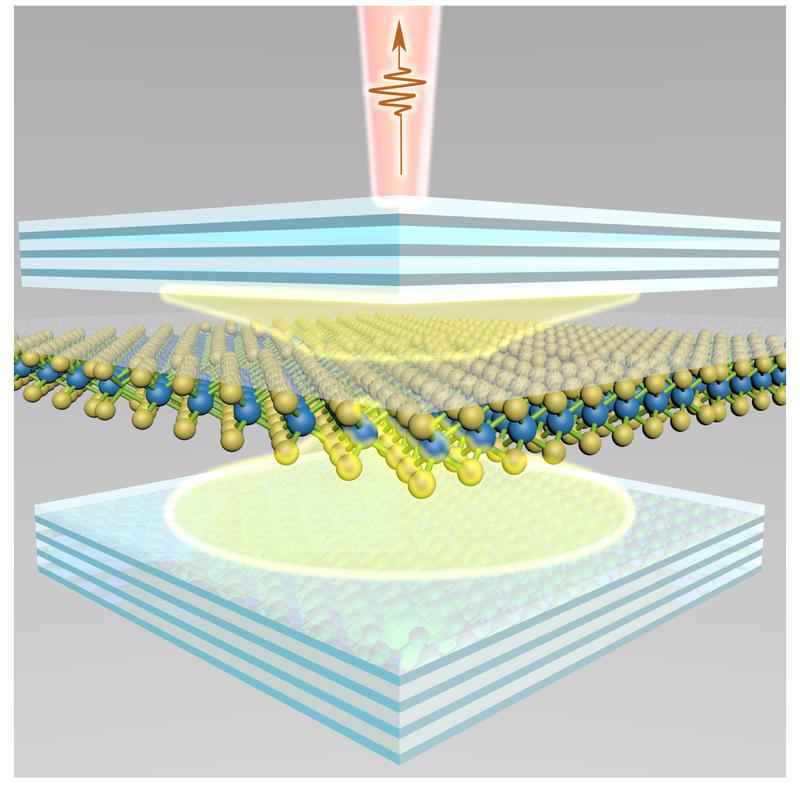 Laser emission demonstrated at room temperature: semiconductors consisting of three atomic layers could form the basis for innovative lasers. An international team of researchers led by physicists from the University of Oldenburg presented their findings in the journal Nature Communications.

In an article published in the scientific journal Nature Communications, an international team led by Oldenburg physicists Dr. Hangyon Shan, Prof. Dr Christian Schneider and Dr. Carlos Anton-Solanas reports that crystals consisting of just three atomic layers can emit laser-like light at room temperature. This new material thus has the potential to be used as a light source in miniaturized circuits and also in future quantum applications.

Scientists have so far only been able to produce such effects at temperatures just above absolute zero. "The transition from these cryogenic temperatures to room temperature makes these two-dimensional materials much more interesting for applications," said Schneider, who heads the Quantum Materials research group at the University of Oldenburg.

The team used the compound tungsten diselenide for its experiments. This compound belongs to a class of semiconductors that consist of a transition metal and one of the elements sulphur, selenium or tellurium. "The monolayer crystals of these semiconductors interact very strongly with light and have been considered as a potential basis for micro- and nanolasers for some time," Anton-Solanas explained. Only last May, the same team reported in the journal Nature Materials that a layer of the semiconductor material molybdenum diselenide generated laser light at cryogenic temperatures.

A particularly interesting aspect is that if sufficient exciton-polaritons are generated they cease to behave like individual particles and merge into a macroscopic quantum state. A sudden increase in light emission from the sample indicates that this transformation has taken place. Like the light from a laser, the resulting radiation has only a single wavelength. It is monochromatic, so to speak. It also radiates in a specific direction and is able to display "interference" phenomena, a property known as "coherence" in physics.

To demonstrate this effect for tungsten diselenide, the team first produced samples of the semiconductor that were less than a billionth of a metre (one nanometre) thick and placed them between special mirrors. The physicists then stimulated the crystals with laser light and studied the resulting emissions using various techniques. They found strong evidence that the radiation had to come from hybrid particles that have properties of both light and matter. This allowed them to conclude that exciton-polaritons had indeed formed in the semiconductor. In addition, the researchers found evidence that these particles had merged into a common macroscopic quantum state.

"Our results strengthen the hope that two-dimensional materials can be suitable as a platform for new nanolasers that can also function at room temperature – a goal that various groups around the world have been pursuing for around ten years," Schneider explained. In May of this year, another team of researchers also found evidence of coherent laser emissions from exciton-polaritons in monolayer crystals at room temperature. "This reinforces our belief that our results are correct," said Anton-Solanas. In addition, the strong interaction between light and two-dimensional materials has special properties that make these materials interesting for circuits in which light could control electric currents.