By capsule through the bloodstream: How intestinal bacteria communicate with the body 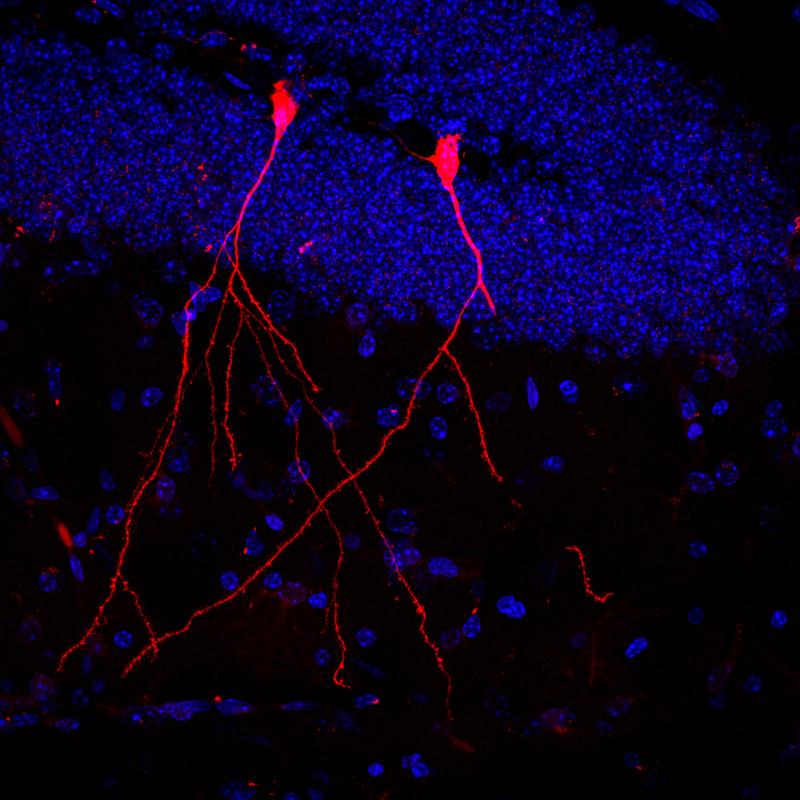 In the brain of the transgenic mouse, two nerve cells glow red because they have absorbed membrane vesicles containing functional protein from intestinal bacteria. Blue: nuclei of the other cells in the brain tissue. | Quelle: Stefan Momma | Copyright: Goethe University Frankfurt, Germany

Bacteria in the intestine pack a wide spectrum of their biomolecules into small capsules. These are transported via the bloodstream to various organs in the body and even absorbed and processed by nerve cells in the brain. This has now been shown for the first time by a team of researchers from Goethe University, FAU (University of Erlangen-Nuremberg) and the University of California in San Francisco. The newly established research method will help to better understand the influence of intestinal bacteria on diseases and could support the development of innovative forms of drug or vaccine delivery.

FRANKFURT. In the human body, bacteria are in the majority: According to estimates, there are 1.3 bacterial cells for each human cell. Our bacteria are correspondingly superior to us in their genetic diversity. All intestinal bacteria together – the intestine’s microbiome – have 150 times as many genes as humans. The intestinal bacteria’s metabolic products have a variety of effects on our body: For example, they train our immune cells and contribute to their maturation, they control metabolic processes in the body and how often intestinal mucosa cells renew themselves. It is highly probable that changes in the microbiome’s composition contribute to the development and course of diseases, e.g. neurological disorders or cancer.

The bacterial metabolites act on the cells of the intestinal mucosa via direct contact. However, how such bacterial substances travel to peripheral organs, such as the liver, kidney or brain, had not yet been explained. It was assumed that small capsules (membrane vesicles), released by bacteria into their environment during normal growth or as a reaction to stress and filled with bacterial lipids, proteins or also hereditary RNA molecules, were the means of transport.

An international research team led by Dr Stefan Momma from the Neuroscience Centre of Goethe University, Professor Claudia Günther from FAU (University of Erlangen-Nuremberg) and Professor Robert Raffai from the University of California has now investigated in mice how bacteria distribute their metabolic products in such vesicles. For this purpose, the researchers colonized the intestines of mice with E. coli bacteria, which produced a specific type of gene scissors (Cre) and released these into their environment via vesicles. The mice cells contained a gene for a red fluorescent protein, which could be activated by the Cre gene scissors (Cre/LoxP system).

The result: In the subsequent examination of the mouse tissue, the bacterial vesicles had been absorbed by individual cells in the intestine, liver, spleen, heart and kidneys as well as by immune cells. Consequently, functional Cre contained in the vesicles could enter the cells and lead to the expression of the red marker protein. Even individual nerve cells in the brain glowed red. Stefan Momma: “Particularly impressive is the fact that the bacteria’s vesicles can also overcome the blood-brain barrier and in this way enter the brain – which is otherwise more or less hermetically sealed. And that the bioactive bacterial substances were absorbed by stem cells in the intestinal mucosa shows us that intestinal bacteria can possibly even permanently change its properties.”

The fluorescence images indicate, says Momma, that the vesicles were probably distributed throughout the body via the bloodstream. “The further study of these communication pathways from the bacterial kingdom to individual mammalian cells will not only improve our understanding of conditions such as autoimmune diseases or cancer, in which the microbiome quite obviously plays a significant role. Such vesicles are also extremely interesting as a new method to deliver drugs or develop vaccines, or as biomarkers that point to a pathological change in the microbiome.”