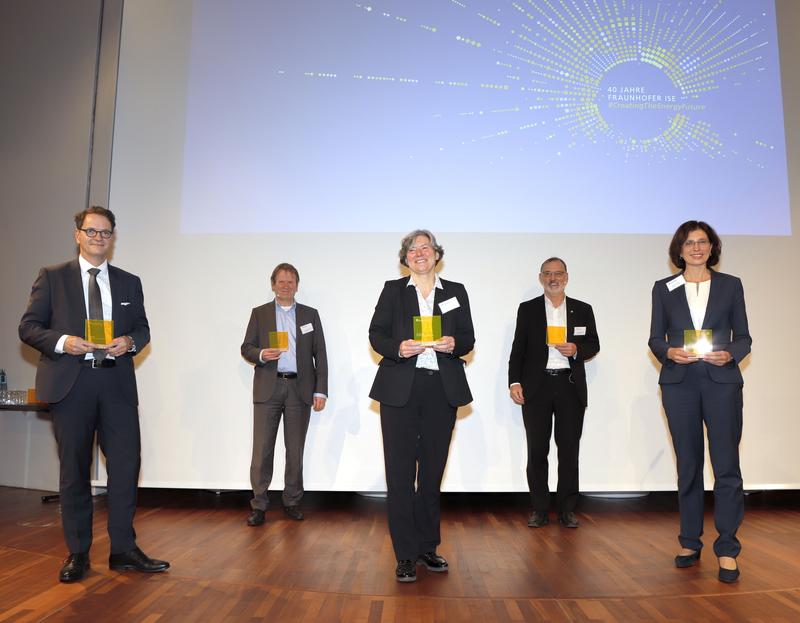 This year the Fraunhofer Institute for Solar Energy Systems ISE celebrates its 40th anniversary. As the largest solar research institute in Europe with currently around 1300 employees, Fraunhofer ISE has been contributing to Germany’s energy transition since it was founded in 1981. Today, the institute has become a major global trailblazer and research partner for an energy supply based on 100 percent renewable energy.

To celebrate this occasion, Fraunhofer ISE is organizing a symposium entitled "Sustainable Research for the Energy Transition – and the Coming Generations.” Prof. Dr. Hans-Martin Henning, institute director, comments: "From the start, Fraunhofer ISE has carried out solar energy research and development with a holistic view of the entire energy system, encompassing a wide breadth of relevant research topics. Prof. Dr. Andreas Bett, institute director, adds: "We look back on 40 successful years. However, at the same time we look to the future and ask what social, economic and political efforts are currently required in order to facilitate the breakthrough to a climate-neutral energy system.”
In 1981, Prof. Adolf Goetzberger, visionary and solar pioneer, gave up his position as institute director of the Fraunhofer Institute for Applied Solid State Physics IAF to found Fraunhofer ISE. Today, Prof. Dr. Andreas Bett and Prof. Dr. Hans-Martin Henning head Fraunhofer ISE in a dual leadership position. This leadership team reflects the organizational management of the institute’s two, equally large research areas of “Photovoltaics” and “Energy Technologies and Systems.”
Photovoltaic Research for Higher Efficiencies and Lower Costs

Many photovoltaic technologies developed at Fraunhofer ISE have found widespread use in global solar cell production; for example, the use of lasers or the TOPCon solar cell technology. With these and other PV technologies, the Institute has been able to achieve numerous efficiency records for different types of solar cells; for example, multicrystalline silicon with TOPCon technology (22.3 %), both-sides contacted silicon solar cell (26.0 %), III-V-silicon tandem solar cell (35.9 %).
Research for CO2-Neutral Energy Technologies and Systems

Transforming the energy supply to a renewable-based energy system does not end with energy provision. In order to meet the systemic requirements of a renewable energy supply across the board, the researchers at Fraunhofer ISE have been looking at ways to integrate solar electricity and solar heat into the energy system from the very beginning. In the mid-80s, for example, researchers planned and installed a photovoltaic system on the Rappenecker Hütte in the Black Forest, making it the first hikers inn to be completely supplied by renewable energy sources. Its annual electricity consumption of 4000 kWh is covered about 65 percent by photovoltaics, 10 percent by wind power and 25 percent by a fuel cell. Milestones such as the development of the first all-electric inverter for use in autonomous PV systems or a highly efficient inductive charging system for electric vehicles also bear the institutes systemic signature. In the future, electricity grids will transmit and distribute increasingly greater shares of electricity generated from solar and wind. Today, the power electronics needed for the future grid are being developed at Fraunhofer ISE’s Center for Power Electronics and Sustainable Grids.
In the field of solar thermal energy, the Institute has developed, for example, solar collectors made of ultra-high performance concrete and novel selective absorber layers for solar thermal collectors. Other developments include methods for optimizing the control of large solar thermal power plants. Heat pumps are foreseen as one of the main heating technologies in the future. For this purpose, Fraunhofer experts have carried out extensive field tests on heat pumps in the practice. They are also developing refrigeration circuits which use natural, climate-friendly refrigerants.
Accompanying the Decisive Phase of the Energy Transition

Pioneering studies by Fraunhofer ISE, such as the recently updated model-based study "Pathways to a Climate-Neutral Energy System - The German Energy Transition in the Context of Social Behavior", show that renewable energy expansion in Germany must increase dramatically in order to meet the climate protection targets by 2045. The study also analyzes the effect of societal behavior on the expenditure and costs of the energy system transition and demonstrates in different case studies the large impact that it has.
Fraunhofer ISE’s Energy Charts is a comprehensive online energy database which is publically accessible. The prepared visualization of the energy data for Germany and recently for other European countries serves as a basis for information and discussion and provides many stakeholders with data on the current status of the energy transition.
The projected space demand for photovoltaics is six to eight times the current area used. To meet this demand, Fraunhofer ISE has designated integrated photovoltaics as one of its key research topics. In 2017 researchers planned and installed the first agrivoltaic system in Germany, and in 2019 they were able to demonstrate a colored PV module integrated into a car roof. New types of module interconnections, for example, novel cell connectors and adhesive bonding processes for shingle modules but also modules for building-integrated photovoltaics and colored MorphoColor® layers enable increasingly better photovoltaic modules, even for applications on demanding surfaces.
At Fraunhofer ISE, increasing the efficiency of solar cells and modules shall continue to be a priority in the future. For this purpose, the Center for High-Efficiency Solar Cells was inaugurated in summer 2021 to provide a modern lab infrastructure for the key area of tandem photovoltaics. Electric energy storage is also an important research topic at the institute. A new laboratory building for battery research and testing is planned to open in 2022, enabling space for more comprehensive research in this area. Plans are also underway to increase the infrastructure for hydrogen technologies, a key component for the future energy system. The first solar hydrogen filling station in Freiburg, was opened in 2012 at Fraunhofer ISE as a research platform and publicly accessible pilot project. The filling station has long since received more traffic than it can handle.
"Much progress has been made so that now a renewable-based energy supply has become conceivable. However, in terms of implementation, we still have a long way to go," reflects Hans-Martin Henning. And Andreas Bett adds: "That is why applied research fostering the transfer of new technologies and system solutions to the practice will not lose importance in the coming decades."