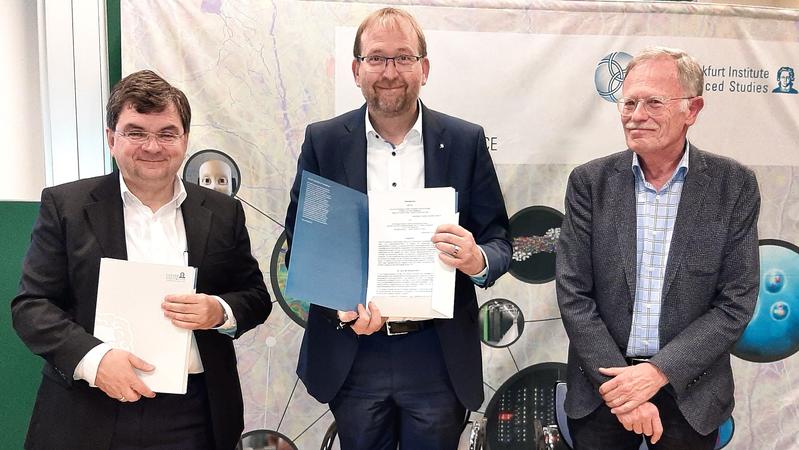 Starting next year, Goethe University and the Frankfurt Institute for Advanced Studies (FIAS) will intensify and expand joint research projects and the exchange of scientific knowledge. A new cooperation agreement has laid the legal foundations for this. The contract was signed yesterday, on November 11th.

Interdisciplinary basic research in the natural sciences, life sciences, neurosciences, and computer sciences - in these areas Goethe University and FIAS have been collaborating since the research institutes foundation in 2003. The new contract will allow for easier coordination of existing projects and the start of new projects.

"The contract will give us the freedom to conduct even more interdisciplinary research and to design our projects complementary to the questions of the two partners," University President Prof. Dr. Enrico Schleiff said at the signing of the contract yesterday evening. "However, it is important for us that FIAS is now closely linked with the university's natural science departments. For example, a project at FIAS can now also be applied for through the university."

"Even though FIAS acts autonomously and independently, there have of course always been close ties between the two institutions. We are looking forward to strengthening and structurally anchoring this cooperation now," said Prof. Dr. Volker Lindenstruth, Chairman of the Board of FIAS. He signed the cooperation agreement together with his board colleague Dr. Rolf Bernhardt.

For example, it is planned to jointly develop technical and content-related topics of high-performance computing in the natural and life sciences within the framework of the Center for Scientific Computing (CSC); only recently, Goethe University was accepted into the national network for high-performance computing. Another goal is to intensify cooperation in the life sciences: for example, researchers are already cooperating on the LOEWE focus on multi-scale modeling (CMMS), which aims to quantify complex biological systems, and the cluster project ENABLE, which is investigating the internal balance of cells (homeostasis), to help develop novel drugs for inflammation and infection diseases. Thus, FIAS will be involved in preparing the future Excellence Initiative of the Federal Government.

In addition to funding ongoing projects, Goethe University has also developed a fellowship program to support its researchers in starting new projects with FIAS. In this way, researchers get the opportunity to devote themselves to new creative and interdisciplinary approaches to their research at FIAS during a sabbatical.


About 80 scientists work at FIAS, and several fellows also conduct research and teaching at Goethe University. The two institutions also work together to promote young researchers; at the Frankfurt Graduate School for Science (FIGSS) at FIAS and the program to support doctoral students at the GRADE Center iQbio at Goethe University.

Goethe University established FIAS in 2003 as a foundation under civil law. Since then, FIAS has been promoting science in interdisciplinary, theoretical basic research in the natural and life sciences. In doing so, it operates as an ambitious, independent scientific institution. At the same time, FIAS is a hub for research activities at Goethe University and at various surrounding research institutions and thus will be essential for the preparation of the next Excellence Initiative.