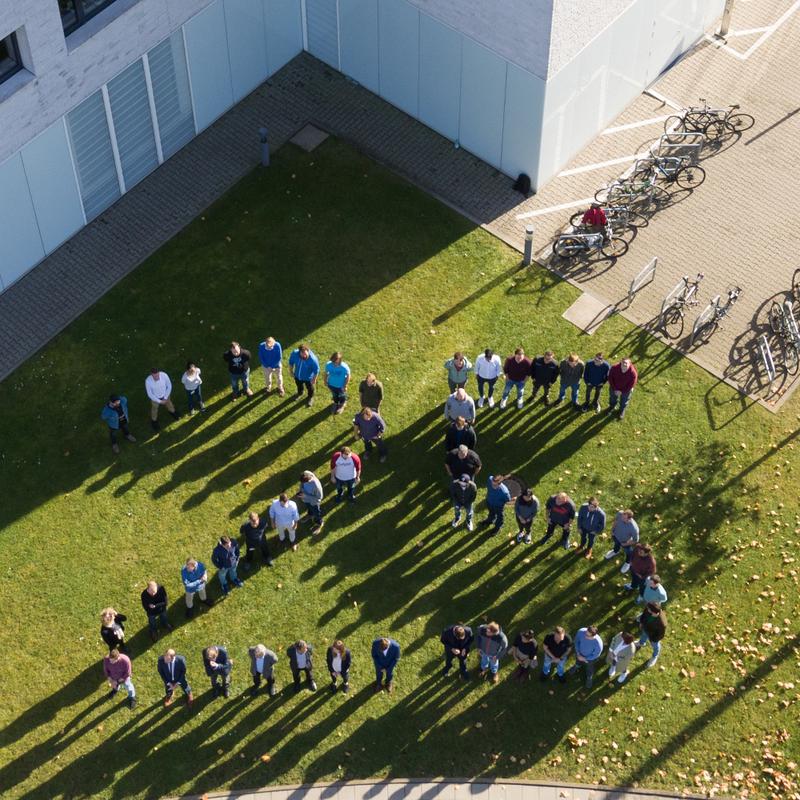 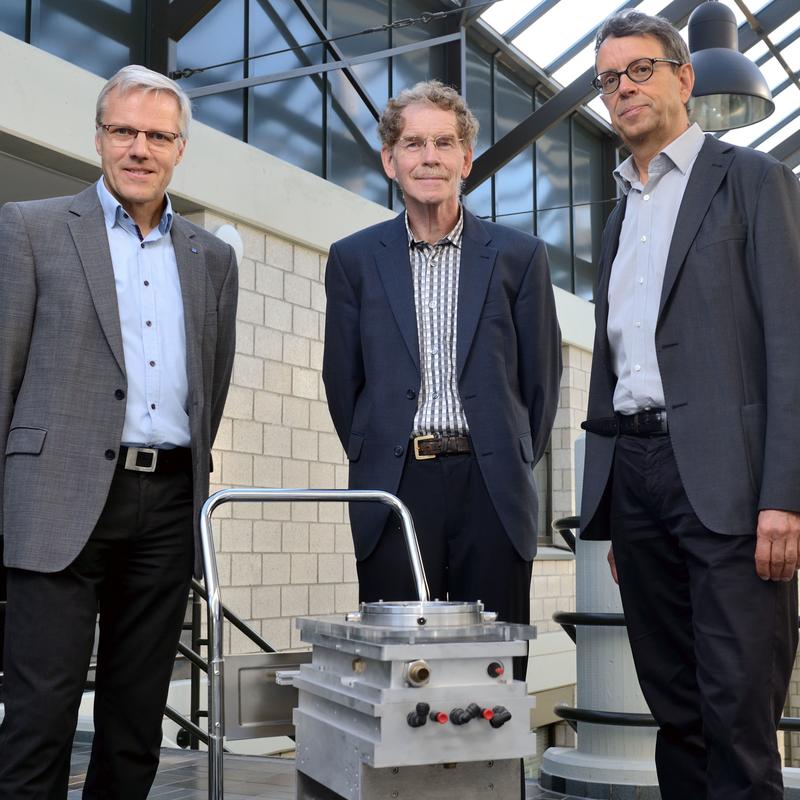 A drone hovers in the sky above the Fraunhofer Institute for Laser Technology ILT in Aachen. It films 50 employees from the “Laser Powder Bed Fusion (LPBF)” department from above as they stand together and form the number 25. The anniversary of the basic patent for LPBF marks an occasion for a video clip: 25 years ago, only one Fraunhofer ILT researcher was actively working on the pro-ject and the patent for metallic 3D laser printing was filed in 1996.

“This is an auspicious occasion for a retrospective and outlook on our technology,” Jasmin Saewe says, pleased. She has been head of the LPBF competence area at Fraun-hofer ILT for several months. Today, she is in charge of around 50 employees and students.

The inventors of the process, Wilhelm Meiners, Andres Gasser and Kurt Wissenbach, are standing in front of a small transport trolley: “We basically started working on LPBF while I was working part-time at the institute,” says Meiners - now an expert at TRUMPF Laser- und Systemtechnik GmbH - with a smile, looking in front of him at the very first LPBF machine at Fraunhofer ILT.

In LPBF, the metal powder is applied using a scraper and the laser beam is guided along calculated paths over the powder bed. As the laser melts the metal powder, the workpiece is produced layer by layer in the intended shape. Meiners reminds his comrades-in-arms and smiles: "No one believed - just us - that our development could turn into something useful!"

The LPBF process makes it possible to produce complex functional components in a way that is both economical and efficient. Furthermore, the production costs depend less on the geometrical complexity, but mainly on the volume of the component. What was so special about the idea at the time was to focus on materials with interesting applications, such as cobalt-chromium alloys for dental implants, and then to adapt the process accordingly. Today, LPBF is used in a wide range of industrial applications, from turbomachinery and automotive engineering to aerospace and medical technology. In 2019, the global market for additive manufacturing of metals – including system, material and service sales – is estimated at around €2 billion. LPBF accounts for over 80 per-cent of the market for additive manufacturing with metals, making it the dominant technology.

Currently, Fraunhofer ILT is focusing on advancing innovative illumination concepts, adapted to the requirements or geometry of components. The institute is using its expertise in systems engineering to develop novel machine concepts to increase the productiv-ity of the process. Jasmin Saewe: “Not only do we take the integration of our developments into industrial process chains very seriously, but we also identify and open up new markets.”

Since the LPBF process builds a component layer-by-layer, a three-dimensional manufac-turing task can be reduced to two dimensions. As a result, the process offers a number of systematic advantages when compared to conventional manufacturing techniques such as casting or machining. For example, it can generate complex cooling channels for the targeted temperature control of tools or integrated grid structures for lightweight construction applications. In this way, prototypes can be produced in small series with identical material properties in a very short time. Another systematic advantage is the shortening of development times: Numerous iterations can be carried out with less effort. This results in a shorter time to market for new products.

Fraunhofer ILT views the LPBF technology in its entirety, thus forming the basis for a socially relevant future topic. With regard to cycle-oriented production and the topic of “ecological footprint,” the LPBF process is to become exemplary; the institute is focusing on “life cycle assessment.” By transparently assessing ecologically and sustainably manufactured products, research is helping industry and SMEs to assume responsibility for people and the environment and to position themselves on the market with a competitive advantage. Co-inventor Willhelm Meiners is certain: "Within the next 20 years, LPBF will play an even greater role. I'm thinking of the automotive sector in particular!"

You can find the video clip for the 25th anniversary of the LPBF patent here: https://s.fhg.de/PC2

Formnext 2021 will take place from November 16 to 19 in Frankfurt am Main.
Are you interested in LPBF? Then visit us and talk to our experts at Booth D41 in Hall 12.