Fraunhofer ISE: Germany’s Tightened Climate Targets Can Be Met by 2045 with Extensive and Rapid Measures 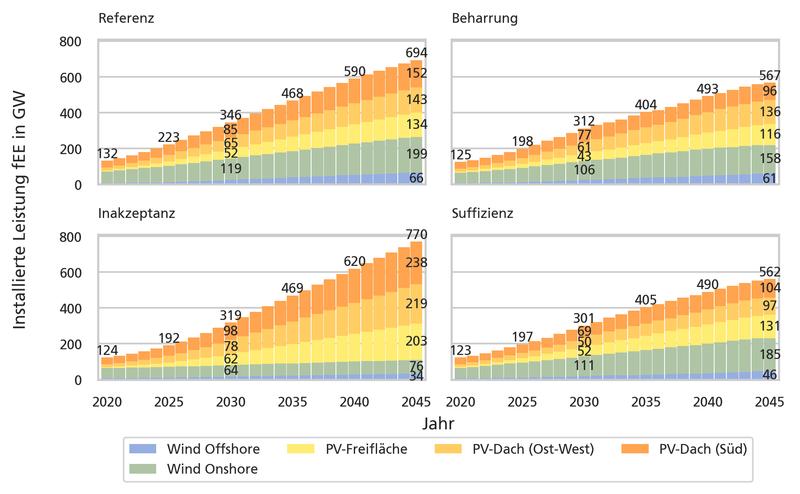 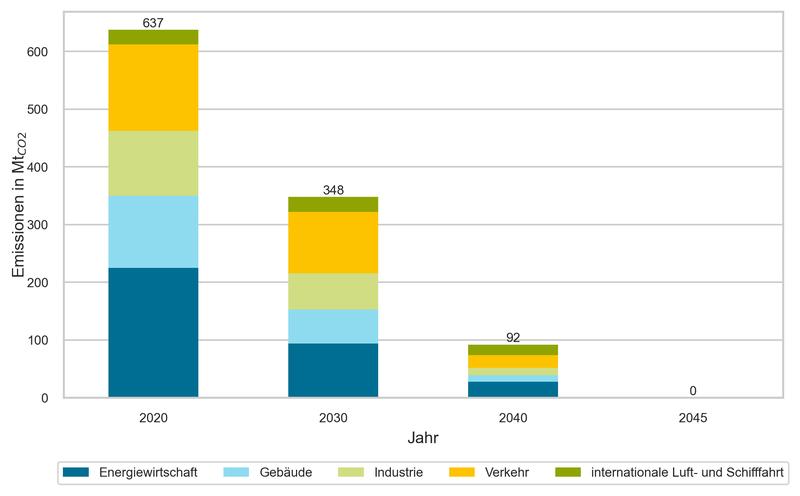 Following the Bundestag’s decision of June 2021 on the Climate Protection Act (KSG), which tightened climate regulations and moved the goal for climate neutrality in Germany to 2045, the Fraunhofer Institute for Solar Energy Systems ISE recalculated the results of its study "Pathways to a Climate-Neutral Energy System" with its energy system model REMod. The Institute works with four scenarios to analyze the effects of societal trends on achieving the climate targets. The results show that the reduction targets are still achievable by 2045, but along different paths and at different costs.

In the newest study from Fraunhofer ISE, the more stringent interim targets of minus 65 percent CO2 by 2030, minus 88 percent CO2 by 2040 and greenhouse gas neutrality for energy-related emissions by 2045 were set as boundary conditions in the energy system model REMod.

Major Differences Between the Different Scenarios

In all of the scenarios, the model results show that the necessary transformation of the energy system is feasible from a technical and systemic point of view. But speed is required at all levels. Also required from now on are almost exclusively investments in technologies compatible with the climate target. The expenditures are already considerable, yet they will become greater if societal behavior inhibits the transformation, since findings show that, among other things, the continued operation of conventional technologies significantly increases the additional costs of the transformation. The Persistence scenario is characterized by strong resistance to new technologies in the private sector, e.g. an adherence to combustion technologies for heating and mobility. In order to still achieve the more stringent climate protection targets, the import volumes of synthetic energy carriers must increase to 1000 TWh. The Non-Acceptance scenario is characterized by strong resistance to further expansion of large infrastructures such as wind turbines, leading to higher investments for photovoltaics, batteries and electrolyzers. In the Sufficiency scenario, on the other hand, behavioral changes in large parts of society lead to a noticeable reduction in energy consumption. The Reference scenario serves as a comparative scenario in which the restrictions or favorable assumptions applied to the other scenarios do not apply.

In relation to Germany's gross domestic product in 2020, the annual net additional expenditure for investments and infrastructure measures for the energy transition, compared to a development without emissions reduction, varies from 1% for Sufficiency, 2.5% for Reference up to a maximum of around 3.0 - 3.5% for the Persistence and Non-Acceptance scenarios. If these additional costs are compared to the cost savings of €2000 billion due to avoided environmental damage (as calculated by the Federal Environment Agency), the net additional costs are reduced to between €340 billion (Reference) and €1300 billion (Non-Acceptance), depending on the scenario. "In the case of the Sufficiency scenario, cost savings of up to 1000 billion euros can be realized. This shows the significant influence that societal behavior and attitude has on the expenditures for the energy transition," explains Dr. Christoph Kost, group leader of Energy Systems and Energy Economics at Fraunhofer ISE.

Electrification of all Consumption Sectors

In all scenarios, only the energy industry is decarbonized significantly faster than the other sectors. Therefore, the reduction rate of CO2 emissions in the individual sectors is highly dependent on the considered scenario. "The accelerated changeover from fossil fuels to renewable energy for electricity generation is a prerequisite, in line with climate protection legislation, for the energy system transition. The direct or indirect (synthetic energy carriers from renewables) electricity use increases throughout all sectors," explains Julian Brandes, lead author of the study. Therefore, the installed capacity for wind energy and photovoltaics must be increased to between 550 and 770 GW el by 2045, which is five to seven times the current level. A high share of renewable energy in the energy system requires a paradigm shift from a demand-driven energy supply based on large power plants to a continuous balancing act between fluctuating renewable energy generation that can be contingently controlled and forecast and a consumption profile with a maximum of flexibility. Besides the sectoral integration of the energy, building, industry and transport sectors, the necessary flexibility can be achieved through power-to-X technologies, battery storage, flexible power plants, and a stronger integration into the European power grid.

The study shows that electrolysis, combined with use of hydrogen in the transport sector or in the chemical industry, will become a key element of the future energy supply. The installed electrolyzer capacity in 2045 shall lie between 40 and 160 GWel. Due to the strong electrification of the consumption sectors and sector integration, the primary energy supply decreases significantly from 3300 TWh today to 1850 TWh (Sufficiency) and 2450 TWh (Persistence) by 2045. More efficient energy use, achieved, for example, through building energy retrofits and environmentally conscious behavior, further reduces the amount of technical equipment required and the accompanying costs.

"With the adjusted climate protection targets set down by the German government in 2021, twenty-four years remain to carry out the energy system transition in Germany. The shortened time period means that the existing framework conditions will have an even greater influence on the path to climate neutrality. The results of our study underline that societal behavior has an enormous impact on the amount of effort needed to achieve a carbon-neutral energy supply," explains Prof. Hans-Martin Henning, institute director of Fraunhofer ISE.