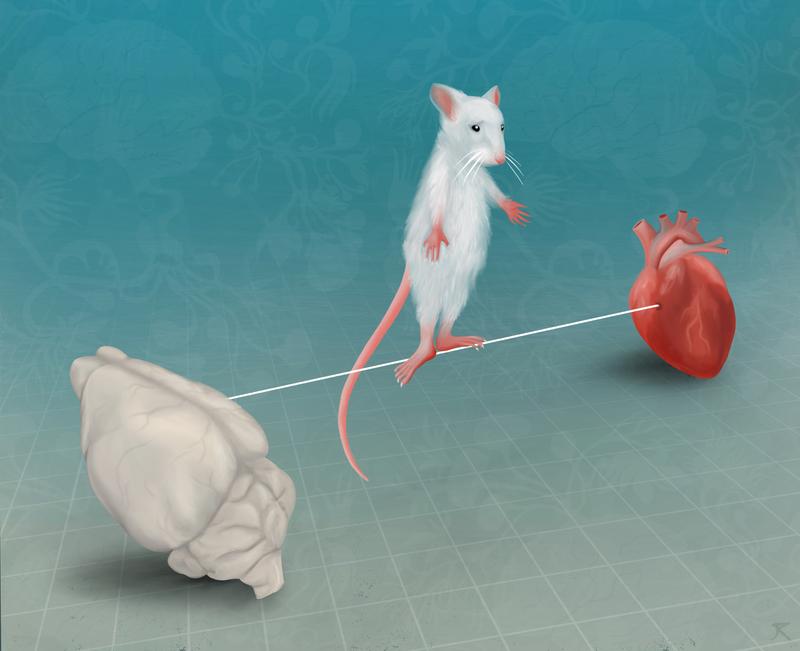 Fear is essential for survival, but must be well regulated to avoid harmful behaviors such as panic attacks or exaggerated risk taking. Scientists at the Max Planck Institute of Neurobiology have now demonstrated in mice that the brain relies on the body’s feedback to regulate fear. The brain’s insular cortex strongly reacts to stimuli signaling danger. However, when the body freezes in response to fear, the heartbeat slows down leading to attenuated insular cortex activity. Processing these opposing signals helps the insular cortex to keep fear in balance. The body’s reactions are thus actively used to regulate emotions and are much more than passive emotional responses.

We usually experience fear as extremely unpleasant. Nevertheless, this emotion has a crucial function: it prevents us from engaging in too risky behaviors. However, this only works if fear is kept within a healthy range. Too intense fear can severely impair our daily lives, as in the case of anxiety disorders or panic attacks.

So how can fear be kept in balance? It seems obvious that bodily signals may play a crucial role, as fear causes noticeable changes in our bodies: the heart beats faster or breathing becomes shallower. However, how exactly the brain processes this information to ultimately regulate emotions like fear is still largely unknown.

Scientists in Nadine Gogolla's research group have now gained important new insights into the influence of body-brain interactions on emotion regulation. They focused on the insular cortex, a brain region that processes both positive and negative emotions. In addition, it receives information from the body, for example from the heart or the lungs.

The researchers played a tone to mice and combined it with an unpleasant stimulus. After some time, the mice became fearful of the tone, which was expressed through “freezing” – a typical fear behavior that is shared among humans and many other species. When the tone was no longer paired with the unpleasant stimulus, the mice gradually learned not to be afraid of it anymore. To investigate the role of the insular cortex in fear regulation, the scientists inactivated the insular cortex during this "fear unlearning". "The result was a real surprise for us," says Alexandra Klein, first author of the study. "We observed a large difference on the behavior of the mice, depending on how fearful they were in the beginning. Highly fearful mice unlearned their fear slower compared to mice with normal insular cortex activity, whereas less fearful mice unlearned much faster."

The results suggested that the insular cortex keeps fear levels within a certain range. In highly fearful animals it supports unlearning of the fearful memory, whereas in less fearful mice it helps to maintain the fear memory.

To learn more about the underlying processes, the researchers examined the activity of the insular cortex in mice with different fear levels. In less fearful mice, the insular cortex’s activity increased as soon as they were exposed to the fear-evoking tone. In contrast, fearful animals displayed a decrease in insular cortex activity when hearing the tone.

Strikingly, Alexandra Klein observed that as soon as a mouse showed fear-evoked freezing behavior, its heart rate decreased – and so did the insular cortex’s activity. Fearful mice froze substantially more often and longer when hearing the tone, which could explain the observed deactivation of their insular cortex.

To test the connection between heart rate and insular cortex activity, the scientists interfered with the information flow between body and brain through the vagus nerve. Interestingly, when the exchange between heart and brain was disrupted, the activity of the insular cortex remained stable and did not decrease during freezing.

The study thus demonstrates that the insular cortex requires feedback from the body to maintain fear at an appropriate level. Moreover, it provides evidence that bodily changes that occur during freezing are an essential part of emotion regulation and that freezing is much more than a passive emotional response.

Since dysfunctions of the insular cortex in humans are associated with various types of anxiety disorders, this research opens up exciting new perspectives. Can we use behavior and its bodily feedback to actively regulate emotions? "For a long time, neuroscience has ignored the fact that the brain does not work in isolation. The body also plays a crucial role in emotion regulation. Our study suggests that we should consider the importance of bodily signals when trying to understand how emotions are regulated," says Alexandra Klein.