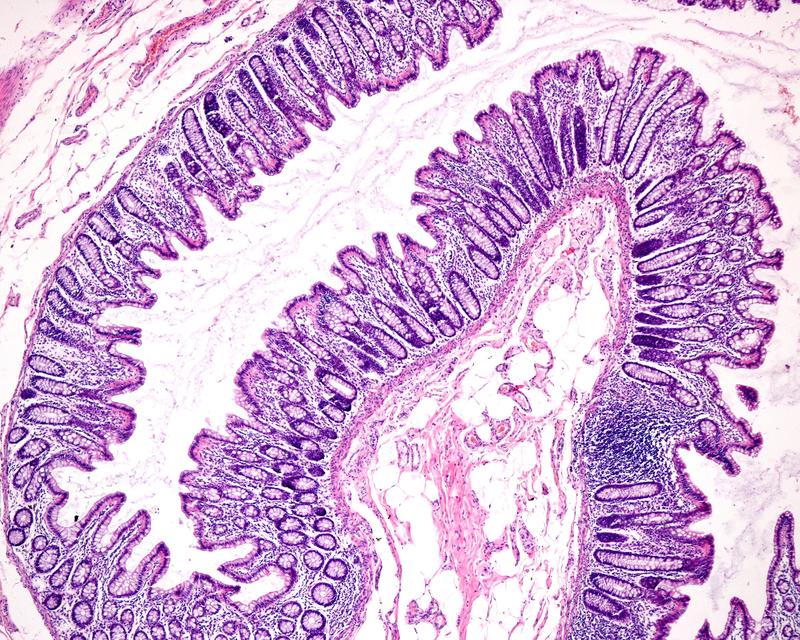 Curvature of cells in intestines. The curved tissue of the intestine walls maximizes the surface for the absorption of nutrients. | Copyright: shutterstock / IST Austria

Scientists find mechanism that allows cells to sense the curvature of tissue around them.

Cells in your body cannot see, but they can feel their surroundings and their own shape. Scientists at the University of Mons and the Institute of Science and Technology (IST) Austria now showed via both - experiments and theory - how cells can sense the curvature of tissue around them and how this influences their inner workings. The study was published in Nature Physics.

Curved surfaces are found everywhere in biological tissues. They provide for instance the increased surface area necessary for the absorption of nutrients in your intestine or for gas exchange in your lungs. More and more evidence suggests that cells are able to sense whether they are in flat or curved environments. Three-dimensional curvature can impact many processes such as the movement of cells, the development of stem cells, and even disease progression. However, the underlying mechanisms by which cells sense curvature and how it ultimately dictates their behavior are less clear.

Now, a study in Nature Physics led by PhD student Marine Luciano and Professor Sylvain Gabriele of the University of Mons in Belgium in cooperation with postdoc Shi-Lei Xue and Professor Edouard Hannezo at IST Austria has uncovered some new findings. The researchers found the mechanisms that regulate the cells’ behavior depending on the change of the environment’s curvature.

Gabriele’s team reproduced the folding patterns observed in living tissues in a very controlled way by developing a method to grow cells on curved surfaces using soft hydrogels – gels made of long molecules trapping water between them. This was important because it is very hard to clearly observe the effects of curvature in complex living tissues. They have many feedback loops depending on their own shape, making it difficult to distinguish cause and effect. These specially constructed surfaces have valleys and mountains with sizes from a hundredth to a tenth of a millimeter. The experiments showed that cells grown on these surfaces tend to spread thinly on the mountains and gather in the valleys.

At IST Austria, Xue and Hannezo developed a key theoretical model that explains the experimental distribution of cells on the surfaces. They used the simple physical principle of energy minimization. Their cell model is inspired by the physics of foam and led to the understanding how the curvature governs the distribution of cells on the surface and therefore also their shape and density in an area. It was already known that cells could sense the density of other cells around them and that this governs their biochemical machinery. Therefore, biochemicals like the Yes-associated proteins (YAP) – key markers of stem cells – are influenced by the curvature via density sensing.

This study identifies how curvature sensing influences multiple pathways in cell development. This kind of interdisciplinary study incorporating physical chemistry, cell biology, and theoretical physics once again sheds light on a cellular mechanism that has been poorly understood so far.

Funding information:
This project was partly funded by the FEDER Prostem Research Project no. 1510614 (Wallonia DG06), the F.R.S.-FNRS Epiforce Project no. T.0092.21 and the Interreg MAT(T)ISSE project, which is financially supported by Interreg France-Wallonie-Vlaanderen (Fonds Européen de Développement Régional, FEDER-ERDF), the Agence National de la Recherche (ANR), as part of the “Investments d’Avenir” Programme (I-SITE ULNE / ANR-16-IDEX-0004 ULNE), the FWO Grant number G005819N, the FRIA (F.R. 566 S.-FNRS), the Fund for Scientific Research (F.R.S.-FNRS) and the grant EOS No. 30650939 (PRECISION). Additionally, it was backed by monetary support from the European Research Council under the European Union’s Horizon 2020 Research and Innovation Program Grant Agreements 851288 (to E.H), and from the Austrian Science Fund (FWF) (P 31639 to E.H.). This work benefited from ANR-10-EQPX-04-01 and FEDER 12001407 grants to F.L.

IST Austria
The Institute of Science and Technology (IST Austria) is a PhD-granting research institution located in Klosterneuburg, 18 km from the center of Vienna, Austria. Inaugurated in 2009, the Institute is dedicated to basic research in the natural and mathematical sciences. IST Austria employs professors on a tenure-track system, postdoctoral fellows, and doctoral students. While dedicated to the principle of curiosity-driven research, the Institute owns the rights to all scientific discoveries and is committed to promoting their use. The first president of IST Austria is Thomas A. Henzinger, a leading computer scientist and former professor at the University of California in Berkeley, USA, and the EPFL in Lausanne, Switzerland. The graduate school of IST Austria offers fully-funded PhD positions to highly qualified candidates with a bachelor's or master's degree in biology, neuroscience, mathematics, computer science, physics, and related areas. www.ist.ac.at