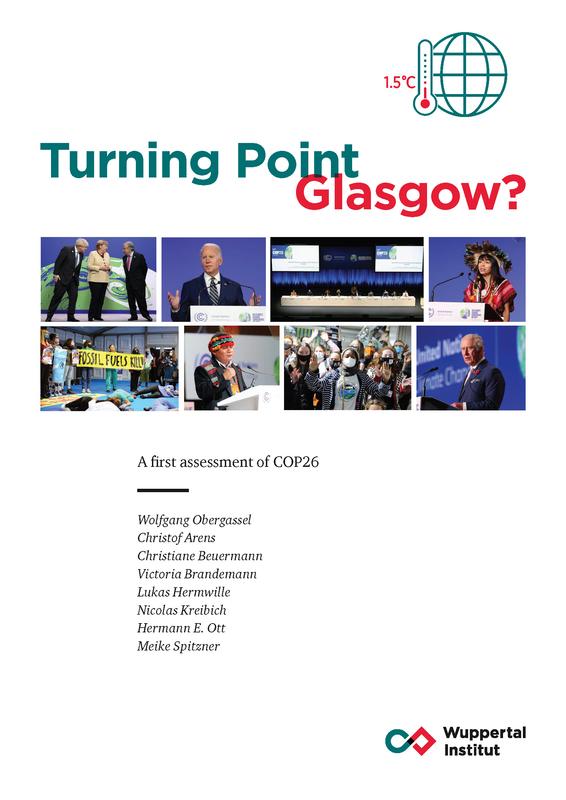 The results of this year's UN climate conference in Glasgow are mixed. The conference provided further precision on what level of ambition is required and called on countries to further strengthen their contributions next year. Also, the detailed rules for the implementation of the Paris Agreement were completed. However, Parties’ climate pledges and actions are still far too weak and industrialised countries refused to budge on a key priority of developing countries, loss and damage. Researchers from the Wuppertal Institute attended the conference and have summarised the key outcomes of the negotiations. An in-depth analysis report will be published early next year.

Wuppertal, 19 November 2021: The 26th session of the Conference of the Parties (COP) to the United Nations Framework Convention on Climate Change (UNFCCC) took place from 31 October to 13 November 2021. The Glasgow conference marked a symbolic half-way point, lying exactly between the adoption of the UNFCCC in 1992 and the year 2050 in which according to the IPCC (Intergovernmental Panel on Climate Change) net zero CO2 emissions need to be reached globally. While the world resolved to combat climate change in 1992, it arguably took off in the wrong direction at first. Global GHG emissions have increased constantly since. Following up from the Paris Conference, which took place in 2015 (COP21) and provided for the first time a broad consensus of parties to forcefully limit global warming and reduce greenhouse gas emissions, the Glasgow conference was supposed to be a turning point. The UK presidency pushed hard to emphasise the need for more ambition and action in the outcomes of the conference.

The Wuppertal Institute’s Research Unit Global Climate Governance closely observed the climate change negotiations during the two-week conference and now presents its initial analysis report “Turning Point Glasgow?” of the conference and its outcomes. A detailed report will be available early next year.

Key outcomes of the COP26

"The ‘Glasgow Climate Pact’ that was ultimately adopted was in many respects weaker than could have been wished for, but nonetheless provides strong guidance on the level of ambition that is required for this decade,” explains Prof. Dr. Manfred Fischedick, Scientific Managing Director of the Wuppertal Institute. The COP decision, which is supported by around 200 countries, highlights the finding by the IPCC that the impacts of climate change will be much lower at 1.5 degrees Celsius compared with the 2 degrees Celsius pathway. Even more notably, the COP decision for the first time makes the link between long-term and short-term ambition. It recognises that according to the IPCC, maintaining a good chance of achieving the 1.5 degrees Celsius limit requires a reduction of CO2 emissions by 45 per cent below 2010 levels by 2030 and to net-zero by 2050. “The Glasgow decision therefore substantially strengthens the guidance provided by the Paris Agreement,” Fischedick concludes.

In addition to the formal process, the UK also used COP26 to orchestrate a series of sectoral climate protection pledges covering a broad range from coal phase-out, limiting deforestation, turning away from cars with internal combustion engines, to financial issues. “These announcements signify major momentum and in the case of coal perhaps a global turning point,” notes Dr. Lukas Hermwille, Senior Researcher in the Global Climate Governance Research Unit at the Wuppertal Institute. The Wuppertal Institute's report notes that the implementation of transformative climate action is inevitably sectoral in that it requires the fundamental transformation of key socio-technical systems that underpin global economies – energy systems, transport systems, industrial systems, as well as agricultural and land-use systems. “Future COPs should therefore pick up this momentum from Glasgow and help to make sure that these pledges are further strengthened and actually implemented,” Hermwille recommends.

“Unfortunately, even with the new announcements made in Glasgow, the collective level of ambition is still far too weak to actually achieve the objectives of the Paris Agreement,” remarks Wolfgang Obergassel, Co-Head of the Global Climate Governance Research Unit at the Wuppertal Institute. “For this reason, it is very important that the Glasgow Climate Pact asks countries to come back with stronger pledges already next year.” The Wuppertal Institute’s report concludes that this also represents a substantial strengthening of the guidelines of the Paris Agreement, which require submissions of new or reinforced NDCs only every five years. “However, the fact that several Parties had been opposed to such a ‘renegotiation’ of the Paris Agreement makes clear that further strengthening of ambition will not happen by itself,” Obergassel notes. “So does the weakening of the wording with regard to coal – ‘phase down’ instead of ‘phase out’ of unabated coal – at the very end of the conference. Further political pressure at all levels will be required to achieve the necessary progress.”

Other key outcomes include finalisation of the “Paris rulebook” and a pledge by industrialised countries to double adaptation finance to developing countries. On the negative side, the conference fell short in substantially increasing support for developing countries to deal with loss and damage caused by climate change that cannot be adapted to, such as land loss resulting from sea-level rise.

On 24 November 2021, the scientists will discuss their first assessment with experts of the results at the virtual Wuppertal Lunch “Milestone or missed chance for climate protection? Roundup and analysis of the results of the Glasgow climate conference.”