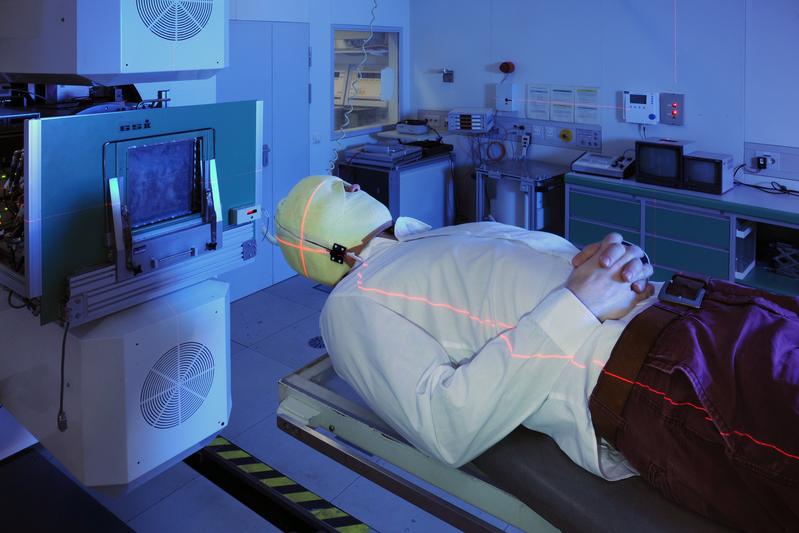 Which are the best applications for tumor therapy with charged particles to realize its great potential for the future? In which cases can it be used most effectively? These aspects belong to the most exciting questions in radiation biology and medical physics. A group of top-class experts now evaluated and summarized the state-of-the-art of heavy ion radiotherapy and presented a review article in the world-renowned online journal "Nature Reviews". Main author of the text with the title „Physics and biomedical challenges of cancer therapy with accelerated heavy ions“ is Professor Marco Durante, Head of the GSI Biophysics Research Department.

Rather than there being a single ‘silver bullet’, different particles and their combination can provide a breakthrough in radiotherapy treatments in specific cases. This is one of the key messages of the review, which Professor Durante published together with the radiation oncologists Professor Jürgen Debus, Scientific Medical Director of the Heidelberg Ion Beam Therapy Center (HIT) and Medical Director of the Clinic for Radio Oncology and Radiotherapy at the University of Heidelberg, and Professor Jay Stephen Loeffler, chair of Radiation Oncology at Massachusetts General Hospital and Harvard Medical School in Boston.)
The GSI Helmholtzzentrum für Schwerionenforschung had pioneered new approaches to radiation therapy at an early stage and was the first in Europe to start heavy ion therapy. This treatment method can meet the requirements of modern radiation therapy particularly well: Radiotherapy should have low toxicity in the entrance channel, where normal tissue exists, and thus spare healthy tissue, and be very effective in cell killing in the target region, in the tumor itself. In this regard, ions heavier than protons have both physical and radiobiological advantages over conventional X-rays. This is also underlined by Professor Durante and his colleagues in their review of the present status quo: “Charged particle therapy is the most advanced radiotherapy technique. Most of the patients are treated with protons, but heavy ions present additional biological advantages.”
More than 20 years ago, the clinical studies of an innovative cancer treatment with accelerated carbon ions began at GSI in Darmstadt. This was preceded by joint studies with the Clinic of Radiology and the German Cancer Research Center (DKFZ) in Heidelberg, and the Helmholtz research laboratory in Rossendorf. It was a starting point of a success story that has led from fundamental research to a widespread medical application. In the meantime, there are a dozen carbon ion clinical centres in Europe and Asia, where the therapy is ongoing. And more are under construction or at the planning stage, including the first in the USA. Clinical results are promising, whereas new ions will be used in the future, like 4He, the more frequent of the two stable isotopes of helium or the stable isotope of oxygen 16O.
The authors of the review article not only provide with great expertise an overview of the rapidly developing research field of particle therapy, but also present the entire wide-ranging spectrum from the physics and technology of heavy ions to radiobiology and the application of new ions and technologies. They also identify the key factors that will determine the future success of particle therapy: So a heated debate on the cost- effectiveness is ongoing in the clinical community, owing to the larger footprint and greater expense of heavy ion facilities compared with proton therapy centers. Heavy ion therapy is more expensive than X- ray therapy. On the other hand, radiobiology suggests that heavy ions for example can be exquisitely effective against hypoxic tumors, i.e. tumor tissue with a poor oxygen supply, and improve the effects of immunotherapy.
Thus, for the future of particle therapy further R&D in accelerators and beam delivery is necessary to make the machines smaller and cheaper and to exploit new, fascinating treatment modalities such as FLASH and radioactive ion beams for image-guided therapy.
Finally, Professor Durante and co-workers suggest that a combination of light and heavy ions can provide optimal biological effects, and underline the necessity of more pre-clinical research in these fields. “The potential of heavy ions has not been fully exploited in clinics.”
Current research at GSI and FAIR is also contributing an important part to the future of particle therapy, always with the goal of further increasing the therapeutic window in radiotherapy. For example, in the current experiment period FAIR Phase 0 GSI and FAIR succeeded in performing a carbon ion FLASH experiment for the first time. This work is about ultra-short and ultra-high radiation, where the treatment dose is delivered in sub-second timescales. The aim of FLASH irradiation is to apply even less damaging a high dose in a short time.
In addition, Professor Marco Durante's current BARB project, which is funded and acknowledged by an ERC Advanced Grant, aims at the use of the same beam for treatment and for imaging during treatment and thus increase precision. Radioactive ion beams are the ideal tool. Only cutting-edge facilities such as FAIR can generate such intense beams.