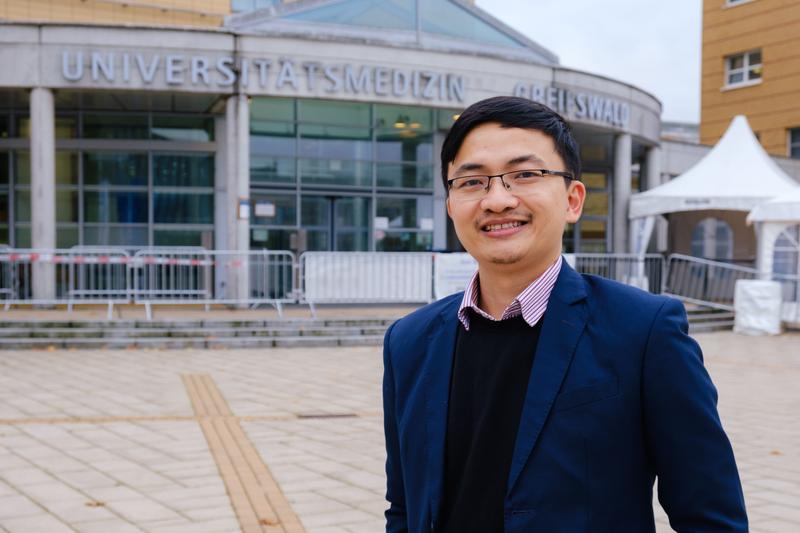 The winner of this year’s DAAD Prize is PhD student Quang Trung Tran from Vietnam. The prize from the German Academic Exchange Service (DAAD) honours international students, who have accomplished outstanding achievements both in their studies and in their community work and/or through their social commitment. The prize, which is accompanied by prize money of € 1000, was awarded by the University of Greifswald’s Pro-Rector for Teaching, Teacher Education and Internationalisation, Dorthe G. A. Hartmann, during the ‘Academic Career Day’ which was hosted at the Alfried Krupp Institute of Advanced Studies in Greifswald on 23 November 2021.

Tran studied Medicine with a specialisation in gastroenterology at the Hue University of Medicine and Pharmacy in Vietnam. As a result of the cooperation agreement between the Hue University and the University of Greifswald, Dr. Stefan Seiberling, Head of the University of Greifswald’s Research Support Centre, introduced the student to his later PhD supervisor, Prof. Dr. Markus M. Lerch from University Medicine Greifswald. Following his studies, the talented young man consolidated his skills and knowledge of gastrointestinal endoscopy in Japan. Thanks to the DAAD’s research grant programme, the early-career researcher received the opportunity to commence his PhD studies in the field of gastroenterology in Greifswald in 2018. Prior to moving to Greifswald with his family, he spent three months learning German in Berlin. He is currently learning medical terminology in a German language tutorial provided by University Medicine.
It did not take long for the newcomer to become a valued member of Greifswald’s Vietnamese community. When Vietnam was hit by flooding, landslides and flash floods, he got involved in collecting donations for his home country. At the beginning of the COVID-19 pandemic, the young doctor mobilised his Vietnamese community to sew protective face masks from materials that were financed by the campaign ‘I protect you - You protect me’ organised by Save the Kidney Nordverbund Niere. These masks were donated to hospitals, care homes and the fire service in Wolgast, Neubrandenburg and Greifswald to protect the emergency service, nursing and care staff. Furthermore, with help from Prof. Dr. Nicole Endlich, the committed young man approached Mecklenburg-Vorpommern’s State Government to ask them to advocate Germany’s provision of urgently required vaccine to fight SARS-CoV-2 in his home country. Minister Christian Pegel took up on this request and approximately two weeks later, the Federal Government decided to donate 2.5 million vaccinations to Vietnam. On top of all that, the doctor cares about the training of young medical staff. He organised a charity scholarship fund that provides rent supplements to students lacking sufficient financial means.
Quang Trung Tran stresses he considers it important to set himself goals that he can work toward. That’s why he enjoys taking on new challenges, which he approaches with dedication. He has set himself a clear mission: Apart from his own personal development, he is passionate about what he can do for society.
His expertise as a researcher is in demand on an international level, for example at congresses in Asia and Europe. He held two presentations at the ‘Asian Pacific Digestive Week’ in October 2021. Having been invited to take part at the Masterclass of United European Gastroenterology as one of the 40 best candidates and as a young researcher at the ‘Lindau Nobel Laureate Meeting’, he will also be taking part in conferences in November and December.
Tran’s doctoral supervisor, Prof. Dr. Markus M. Lerch, describes the awardee as ‘particularly talented, motivated and committed’. In spite of his full work schedule and his community work, the committed doctor also lends importance to a healthy work-life balance. He spends as much time as possible with his family. His two children are very fond of nursery and school here in Greifswald.
Following completion of his doctorate, Tran would like to return to Vietnam with his family. There, he would like to bring in his experience and expertise and share his knowledge with Vietnamese doctors and students. ‘Thanks to my studies in Germany, I have been much luckier than others,’ says Tran, ‘and that’s why I carry a greater responsibility.’

Further Information
Portrait of Quang Trung Tran, © Lukas Voigt, 2021.
The photo is available on request from pressestelle@uni-greifswald.de and can be used for editorial purposes in combination with this media release. If published, the author of the image must be named.