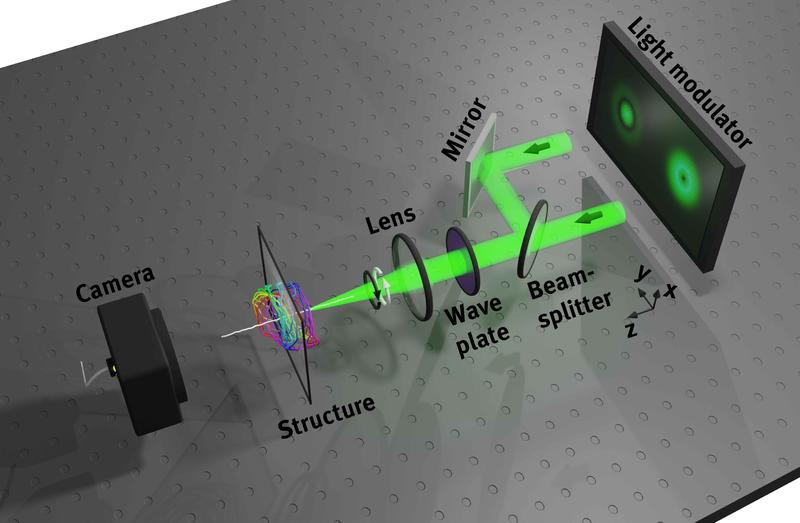 Researchers have developed a method for structuring light in such a way that a projection from four-dimensional space is created. The results have now been published in the journal Nature Communications.

Light is used for various purposes in nowadays applications. For example, data can be transmitted with light and nanoscopic structures can be created by light. To enable such applications, light must be structured. To do this, its properties - intensity (brightness), phase (position in oscillation-cycle) and polarization (direction of the oscillation) - are "tailored". Typically, this results in three-dimensionally structured light fields, for example by using a hologram. Going beyond this, now an international team of researchers led by Prof. Dr. Cornelia Denz of the University of Münster and Prof. Dr. Mark Dennis of the University of Birmingham (United Kingdom) has developed a method for structuring light in such a way that a projection from four-dimensional space is created. The results have now been published in the journal Nature Communications.

The search for four-dimensional light fields is keeping the optics community busy because, for example, light structured in this way would provide a way to transmit data faster. "The fourth dimension is a mathematical construction. We cannot spatially imagine four dimensions with our senses," says physicist Ramon Droop of WWU Münster, one of the study's first authors.

The scientists developed a method that directs light from two laser beams into a structure about 0.2 x 0.2 x 50 cubic millimetres in size that is interwoven to form a hopfion. They accomplished this by using so-called liquid crystal-based spatial light modulators, which can be used to electrically control the optical properties of the light.

The team also developed a new imaging method that can spatially resolve the properties of light associated with the four dimensions. To do this, the group uses a method similar to tomography of measuring two-dimensional slices, which are then assembled to form three-dimensional space. It is then possible to calculate exactly which part of the four-dimensional space is mapped.

"Based on these research results, new types of laser beams could be developed in the future to make data communications more secure. The arrangement of nanostructures could be made more versatile and simpler, and material processing more precise," Cornelia Denz gives an outlook.