Himalayan bats are functionally less diverse at high than at lower elevations, but show the same evolutionary diversity 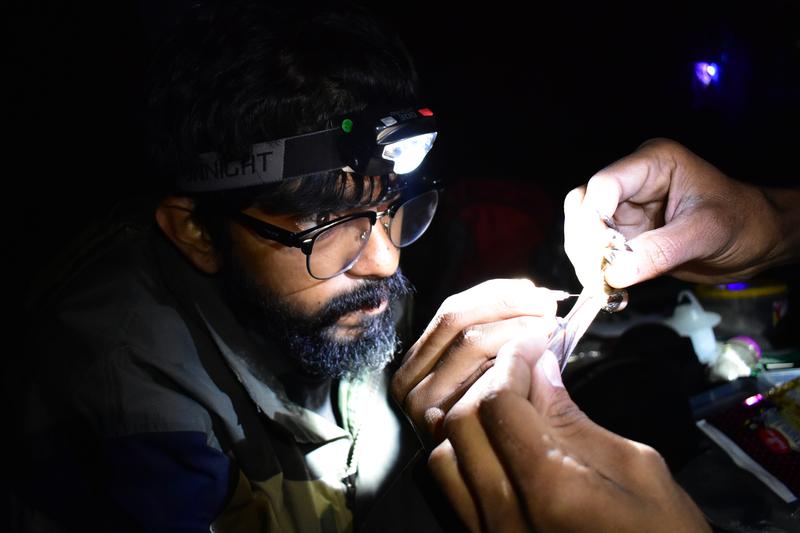 Million years of evolution have produced a dazzling variety of species, each uniquely adapted to its environment. A straightforward way to measuring biodiversity is by the number of species (taxonomic diversity). Recently, there is growing emphasis to quantify diversity also in other ways: a) functional diversity, which is the diversity of phenotypic traits that allow organisms to perform their ecological functions and b) phylogenetic diversity, meaning the variation in the branches in the tree of life.

. In a paper published recently in the journal “Scientific Reports” a team of scientists led by the Leibniz Institute for Zoo and Wildlife Research (Leibniz-IZW) compares these approaches: They found that species richness and functional diversity of Himalayan bat communities decline at high elevation without the loss of phylogenetic diversity. Their findings provide insights on the diversity of bats in the Himalayas and serve as an important baseline in assessing this diversity in the context of environmental changes.
Lead author Rohit Chakravarty from the Leibniz-IZW and his colleagues evaluated three different diversity approaches to identifying biodiversity patterns in bats in the Himalayas. Mountain regions provide ideal settings for these kinds of analyses as they encompass a high number of different climate and vegetation zones along elevational gradients over short spatial scales. “It is quite well known how species richness responds to these elevational gradients, but in order to understand the evolutionary processes that lead to this distribution of species, we need to analyse the diversity of traits and diversity in evolutionary history”, explains Chakravarty. The team caught bats at elevations between 1500 and 3500 meters in the western Himalayas and measured phenotypic traits related to their wing shape and echolocation calls – both important traits that determine foraging style. They compared this information with phylogenetic data of Himalayan bat species from the literature. “Phylogenetic diversity indicates the number of steps or evolutionary adaptations that differentiate species from each other”, says Chakravarty. “It is interesting from an evolutionary standpoint. Three species that sit on the same branch of the evolutionary tree have a shared history of evolution, that is, they evolved from a common ancestor and may hence show similar adaptations to environmental conditions.”
Being apart from each other in the evolutionary tree does not automatically lead to different traits. The scientists found that bat species living at higher elevations have similar traits, meaning that harsher environmental conditions ”filtered” certain traits that are advantageous for survival at high altitudes. However, the phylogenetic diversity at the highest altitude was not lower than in the valleys below. “This shows that employing additional indicators for biodiversity beyond species richness in a region has an added value for diversity assessments”, says Dr Viktoriia Radchuk, scientist in the Leibniz-IZW Department of Ecological Dynamics and senior author of the paper. “It also shows that in this special case the phylogenetic diversity may not be a suitable substitute for measuring functional diversity.” In the investigated region the differences in functional and phylogenetic diversity patterns can be attributed to a family of bats called horseshoe bats. These bat species only occur in lower elevations and, despite belonging to the same family (and being phylogenetically quite similar for that reason), have vastly different traits from each other.
Looking at biodiversity as more than just the number of species in a geographic region is an opportunity to understand evolution as a multi-faceted process. Building on the approach adopted in this paper, future analyses could explore how bat species aligned along gradients of climate and vegetation in the Himalayas. This could foster a deeper understanding of past evolutionary processes and could also make predictions more reliable on how species may respond to future environmental conditions. The Himalayas continue to warm three times faster than the global average, making these questions a pressing topic of environmental research.