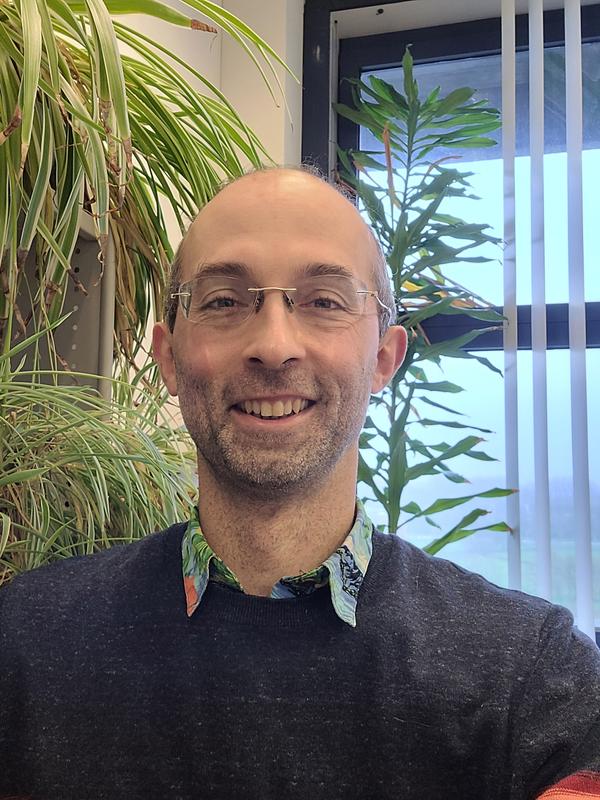 Germany’s most valuable research award, the Alexander von Humboldt Professorship, was awarded to Bas E. Dutilh, the new professor of Viral Ecology in the Cluster of Excellence Balance of the Microverse at the University of Jena. Prof. Dutilh is an expert in modelling microbial balance and is investigating the role that viruses play therein.

Over the last decade, Prof. Dutilh established himself as a pioneer of virus discovery by using metagenomics, the analysis of sequence data from complex natural samples. He is one of the most cited experts in his field worldwide, as confirmed by his ranking among "Highly Cited Researchers" since 2018. Bringing with him an ERC Consolidator grant, the expert for virus discovery is now moving from Utrecht University in the Netherlands to the Friedrich Schiller University Jena. In his new research environment, he is looking forward to expanding the scope of his computational research, as well as developing high-throughput experiments in a brand-new laboratory.

Prof. Dutilh will be rooted within the Cluster of Excellence Balance of the Microverse. As part of the Alexander von Humboldt Professorship, he will focus on integrating his virus discovery work with his microbiome modelling research line. “The Cluster pursues a holistic approach to identify mechanisms of microbial balance from the molecular to the ecosystems level. I am convinced that the balance and imbalance of microbial consortia can only be fully understood if viruses are taken into account,” explains Dutilh. “Modelling the composition of the microbiome, including all factors, will give us the possibility to better predict how it can be affected by outside manipulation.”

The smallest and most numerous players in the Microverse

Viruses play a large role in the dynamics and balance of the Microverse, but only a small fraction have been discovered so far. “I don’t know if it’s accurate yet, but there is an estimate of 10 viruses for every microorganism. This shows how important it is to characterize these tiny evolving particles, in order to understand their functionality and interactions with their hosts,” states Prof. Dutilh. “Since the discovery of viruses in the late 19th century, science has shown that virus-host interactions are an evolutionary hotspot for molecular innovations. Identifying these mechanisms and predicting their effect on hosts, and by extension on the functioning and dynamics of the Microverse, may be the most important open question in viral ecology.”

“To identify unknown viruses, we start with DNA sequencing,” explains Prof. Dutilh, referring to a close and collaborative field of viromics experts around the world. “The community has generated an invaluable treasure trove of research data that can be mined for new biological knowledge,” he adds. The host range is one of the first questions to answer about a newly discovered virus. One of the things the scientists do, is look for functional signals in the sequences, such as genes with which a virus can change the host’s phenotype. “This could have consequences for the ecological function of the bacteria, or it could change harmless bacteria into pathogens. We keep finding new viruses all the time, but they cannot function without access to their host,” continues Prof. Dutilh.

“A lock and key fit”

As member of the Cluster of Excellence Balance of the Microverse, Prof. Dutilh will have the opportunity to collaborate with experts from different institutes in Jena. “I am excited to see how I can apply microbiome modelling approaches to different biomes. Jena is the perfect place because it houses leading experts in biomes ranging from human-associated to soil and aquatic systems, all included in this amazing and collaborative Microverse Cluster.”

In addition to his research, Prof. Dutilh will be developing courses for the University. An upcoming course will be on virus discovery using metagenomics, including topics from virome mining to taxonomy, held for students from the Viroinf consortium that is coordinated by the University, of which he is a collaborator. He is also interested in implementing further classes in bioinformatics.

Prof. Dutilh has already visited Jena a few times and loves the city’s atmosphere, the people, and its surroundings in beautiful Thuringia. For him, coming to Jena and bringing his research to the Microverse Cluster and the University is like a “lock and key fit”. “There is so much knowledge already present in Jena, for example at the Microverse Cluster, the Jena School for Microbial Communication, the German Centre for Integrative Biodiversity Research iDiv, and of course the European Virus Bioinformatics Centre. I think this is the best place for studying the effect of viruses on the dynamics and balance of the Microverse and I really look forward to making a contribution.”