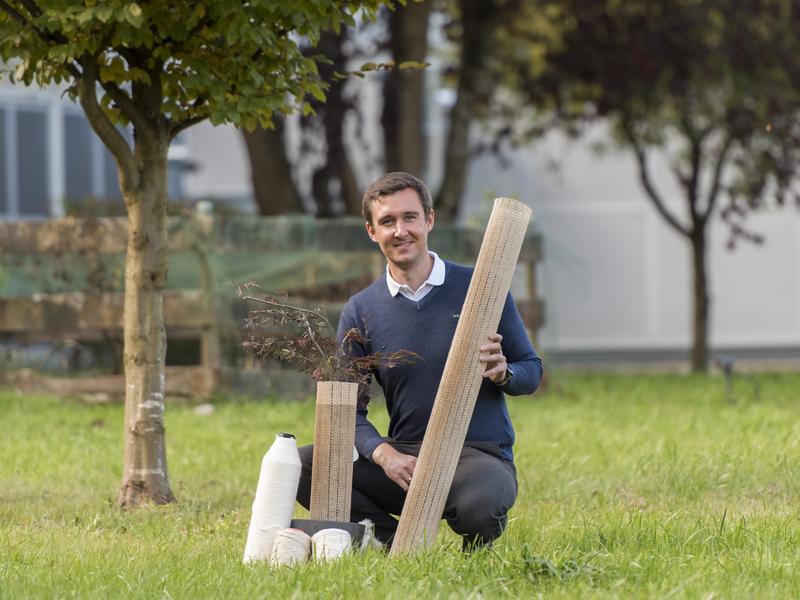 In reforestation projects, the seedlings must be protected. So-called growth covers prevent game from feeding on the young plants and help to ensure that they are not prevented from growing by other plants. Previously used sheaths made of plastic and metal are often not removed in time and pollute the environment. The German Institutes of Textile and Fiber Research Denkendorf (DITF) have developed a biodegradable yarn for growth covers from renewable raw materials.

Reforestation is not only necessary after storms and fires. In general, the forest must be prepared for climate change through mixed stands and rare tree species. Growth envelopes are an important component of forest management in the early years.
Covers available on the market must be removed and collected after three to five years. This is often not dealt with due to lack of personnel or is no longer possible due to overgrowth, or because the cover has grown into the tree. As a result, numerous growth covers remain in German forests every year until they rust or are shredded into environmentally-harmful plastic components by external influences. Although currently available variants made of bioplastics are based on renewable raw materials, they are not biodegradable, decompose already during the use phase and pollute nature with small and microplastics.

The company Buck GmbH & Co. KG therefore commissioned the DITF to develop a yarn from renewable raw materials that is also biodegradable. This yarn should be able to be processed into a tube using a knitting machine and then consolidated into a stiff but at the same time pliable tube.
Renewable natural fibers and polylactide (PLA) were used as starting materials for the development of a hybrid yarn. PLA consists of chemically bonded lactic acid molecules and is currently the only biodegradable thermoplastic available on an industrial scale. Particular attention was paid to ensuring that PLA was particularly pure in order to avoid environmental damage from plasticizers or other ingredients.

Flax fibers were initially used as renewable natural fibers. In several successive processes of spinning preparation, they were opened with the PLA staple fibers, mixed and processed into a fiber sliver. Subsequently, preliminary investigations were carried out to determine a suitable yarn structure for the biobased hybrid yarn. A simple, widely used spinning process was sought that would ensure rapid implementation on an industrial scale. Spinning trials were carried out on a rotor spinning machine, on the roving frame, a process upstream of ring spinning, and on a spiral covering spinning tester developed at the DITF. Finally, roving production by means of a roving frame was selected, since this process produces a voluminous as well as at the same time strong hybrid yarn with sufficiently flexible setting parameters and, moreover, is widely used by many spinning mills. The hybrid yarn was then processed into a knitted fabric at Buck GmbH & Co. KG to produce a knitted fabric from which a beam cover was made.

For material and economic reasons, the flax fibers were replaced by cotton fibers to optimize the hybrid yarn. The cotton fiber is more flexible across the longitudinal fiber axis than the flax fiber. As a result, it is more flexible in the knitted fabric and in the subsequent application as a tree cover in relation to external forces such as animals or wind. Cotton fibers are available in cotton spinning mills compared to flax fibers, which increases the number of potential suppliers for the hybrid yarn.