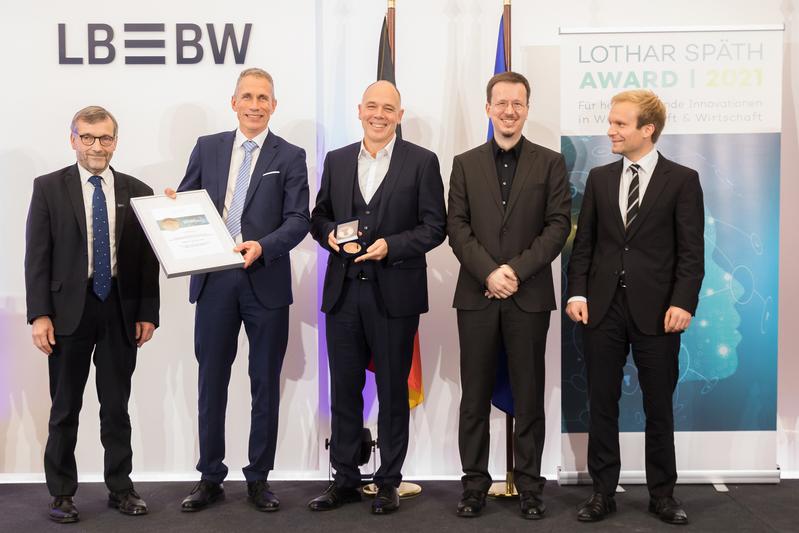 The winners at the awards ceremony in Stuttgart, Germany on November 19. | Copyright: © Lothar Späth Award Stiftung 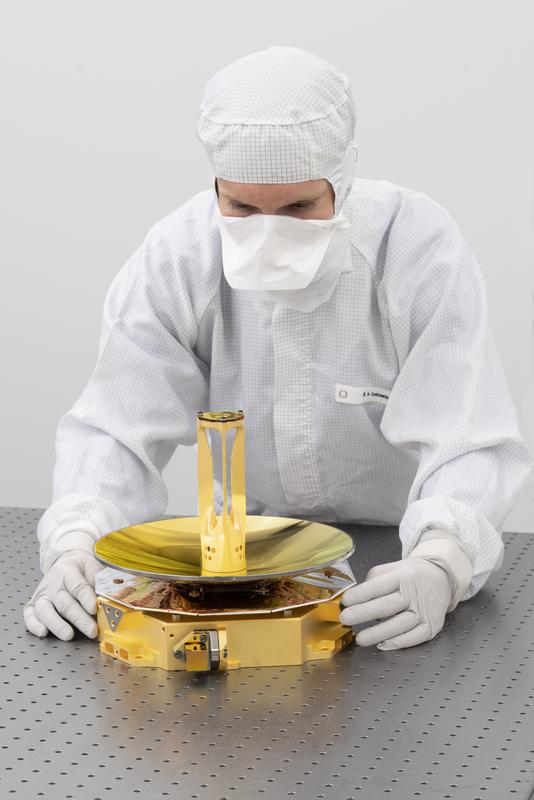 Researchers at the Fraunhofer Institute for Applied Optics and Precision Engineering IOF, together with their partner, have been awarded the Lothar Späth Award for the development of metal-optical precision instruments. The high-performance telescope GALA is to be used in the ESA JUICE mission planned for 2023 to explore Jupiter's moon Ganymede. The award ceremony took place on November 19 in Stuttgart, Germany.

Together with scientists and technicians from HENSOLDT Optronics GmbH in Oberkochen, Germany a research group led by Dr. Stefan Risse and systems engineer Henrik von Lukowicz at Fraunhofer IOF has developed an optical telescope that can handle extreme environmental conditions in ultra-high vacuum. The telescope withstands extreme vibrations during rocket launch, drastic temperature changes as well as high temperature gradients and extreme cosmic radiation exposure, making it suitable for use in space. The team of HENSOLDT and Fraunhofer IOF researchers has now been awarded the third prize of this year's Lothar Späth Award for their joint development.

All tests have already been successfully completed. The award-winning telescope will be
used in space research as early as 2023. That is when the European Space Agency will launch the "Jupiter Icy Moons Explorer" (JUICE for short) to explore the planet Jupiter and its moons Europa, Callisto, and Ganymede. A total of eleven scientific instruments will be on board of the spacecraft. One of them is the "Ganymede Laser Altimeter", also known as GALA. GALA is to explore Jupiter's icy moons, especially Ganymede, which has a strong resemblance to Earth in terms of atmosphere, magnetic field, and water resources. Specifically, the instrument will take high-precision measurements of the icy moon's surface.

To collect this information, GALA will send laser pulses to the lunar surface from an orbit
around Ganymede - i.e., from a distance of about 500 kilometers - and receive backscattered signals. The distance to the lunar surface can be determined from the travel time of the pulse, and from this information in turn the topography can be determined. This requires a high-precision laser receiving unit. Fraunhofer IOF developed a special mirror telescope for this purpose, which captures the laser pulses reflected back from the lunar surface. This is how GALA can measure the topography of Jupiter's moon with a resolution of less than 15 cm.

The development work performed by the team also has a wide range of applications beyond space research: "In addition to existing market access in Earth observation, security technology and institutional remote sensing, the development opens up market access to up-and-down links and satellite communications, quantum optics and quantum optical encryption technologies," said the Lothar Späth Foundation at the award ceremony.

About the Lothar Späth Award

The Lothar Späth Award recognizes outstanding innovations in products, processes, and services in Baden-Württemberg and Thuringia that have been developed as a result of collaboration. It honors the individuals from science and industry behind it. In 2018, the
award thus underscored for the first time the importance of partnership-based, forward oriented thinking and action for Germany's leading position in the world.

In the spirit of Prof. Dr. h. c. Lothar Späth (Minister President of Baden-Württemberg from 1978 to 1991 as well as Chairman of the Executive Board of Jenoptik AG), the award honors and promotes special developments for the benefit of society. The jury members of the award include former German Chancellor Gerhard Schröder as well as former Minister President of Baden-Württemberg and former EU Commissioner Günther Oettinger.