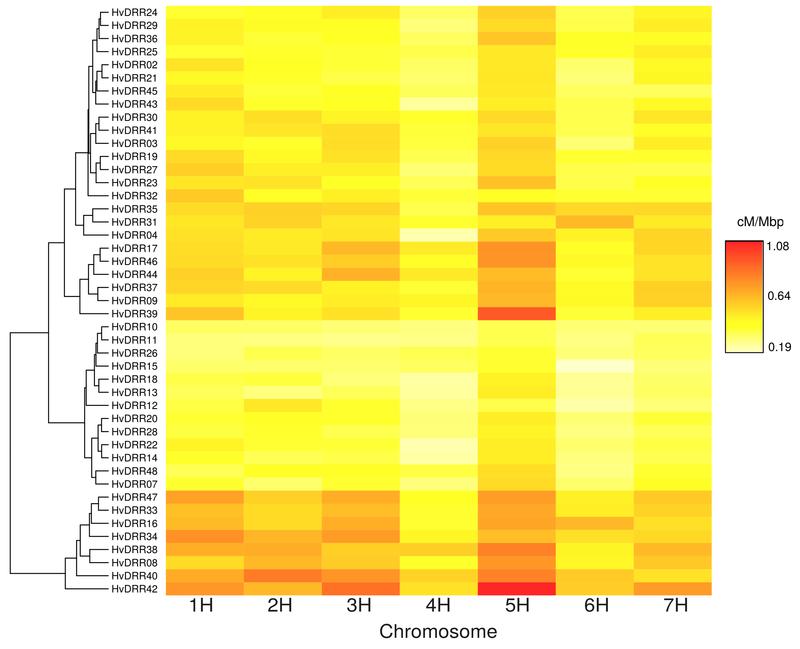 For plant breeding, it is important to create as many combinations as possible of genetic variants within a short time to select the most suitable candidates between plants with many different characteristics. The working group of Prof. Dr. Benjamin Stich from Heinrich Heine University Düsseldorf (HHU) has now developed a method for using natural variations to identify what are referred to as ‘highly recombinogenic individuals’. They have presented their method, which has been tested using a large-scale barley experiment, in the Plant Biotechnology Journal.

During the sexual reproduction of organisms, the genes of the parents are reshuffled in a process known as ‘recombination’. As a consequence, the genome of the offspring’s is like a mosaic of the genetic makeup of its parents. This genetic combination gives rise to a new set of individual characteristics in the progeny, resulting in its respective ‘phenotype’.

To breed new plant varieties, it is desirable to have as many genetic combination options as possible. There are genotypes that, for example, reshuffle their genome at more locations than others, increasing their capacity to generate variation in the progeny. Genotypes with this property are called “highly recombinogenic”.

It is possible to artificially insert such a characteristic into the plant genome employing molecular engineering. However, a team of biologists from the HHU Institute of Quantitative Genetics and Genomics of Plants pursued a different approach. They developed a method that identifies these highly recombinogenic genotypes among variants of natural populations.

Federico A. Casale, a Ph.D. student at the Institute and first author of the study, explained: “The idea of selecting plants that are naturally highly recombinogenic has been around for 70 years. But up to now, it wasn’t possible in practice because of the excessive experimental effort needed to determine this characteristic in a very large number of genotypes just to find a few of highly recombinogenic ones.”

The researchers in Düsseldorf worked with 45 populations of spring barley, each with roughly 100 members. They examined around 50,000 molecular markers in the offspring of those members, which allowed them to determine how the genomes of the parents was “mixed” in the progeny. One of their main findings was that the degree of mixing – the variability of the mosaics between the different populations – can vary by a factor of 2.5.

They also found that 90% of recombination variation in the offspring can be attributed to the effect of an individual parent. Therefore, in the case of a highly recombined population, it is clear that one or both of its parent is highly recombinogenic and has passed on that characteristic. With this knowledge, it is possible to breed plants with increased recombination.

The researchers also used a computer simulation to determine that the differences in the recombination rate can be predicted with an accuracy of approximately 80%. The method used in Düsseldorf makes it possible to design breeding selection programs much more efficiently and thus to accelerate the development of plant and animal varieties, without having to artificially alter the genome.

Prof. Stich on the further implications of the research: “For example, to secure our food supply in the face of climate change, we need new variations of known food plants that are better equipped to deal with new environmental conditions and can produce a higher yield. We are laying the scientific foundations for this in the Cluster of Excellence on Plant Sciences, CEPLAS. With our new method, we can now breed highly recombinogenic genotypes systematically to then produce considerably more variants in a crossing experiment to then select the most promising plants from that group.”