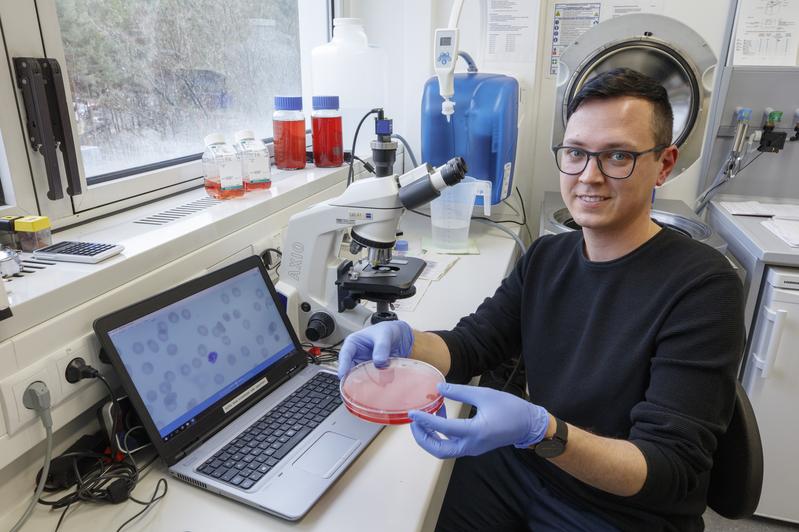 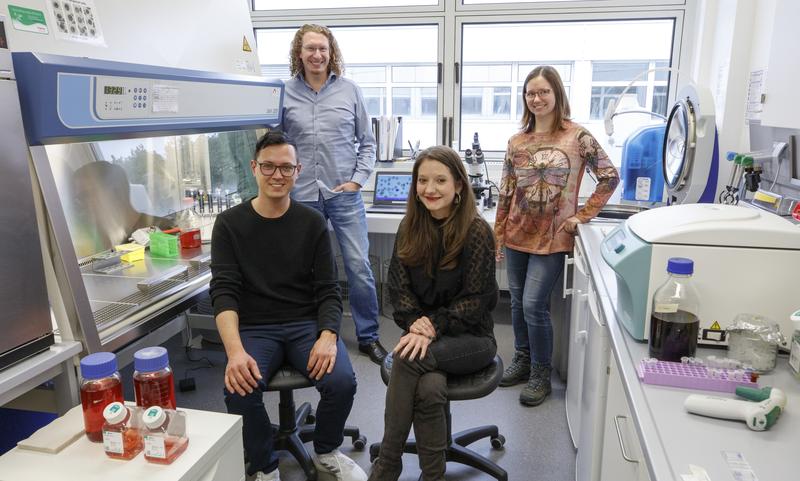 Malaria is one of the most dangerous infectious diseases. The causative pathogens are microorganisms of the genus Plasmodium. A particularly dangerous form of the disease is caused by Plasmodium falciparum. Artemisinin is one of the most important antimalarial drugs against this parasite. However, in a mutant of the pathogen that is now spreading, the effect of artemisinin is limited. A team of researchers around Robin Schumann, a biochemist from Kaiserslautern, has now found the mechanism behind this: A protein that is involved in the development of the parasite is misfolded. The study has been published in the renowned journal "Redox Biology".

The malaria pathogen Plasmodium falciparum is transmitted by Anopheles mosquitoes to humans, in which it first multiplies in the liver and then in the red blood cells, the erythrocytes. "The pathogen develops in cycles," said Robin Schumann, first author of the current study. "The effectiveness of artemisinin is limited in time after drug administration. It only works on plasmodia that are at a certain stage of the life cycle."

In the mutant variant, which originated in the border region of Thailand and Cambodia and is now spreading, the effect of artemisinin is limited. Short-term treatment of patients has shown that the parasites come back. "There is a delay in the development of these mutant pathogens," Schumann explains. "They remain longer in a stage where the agent cannot develop its effect."

The cause of this is a mutation in a gene that codes for the protein Kelch13: As a result, the amino acid cysteine is replaced by the amino acid tyrosine at a specific site of this protein. But what exactly is the role of Kelch13 in the development of the malaria pathogen? What is the effect of this mutation at the molecular level? These questions were addressed by the team of Professor Dr. Marcel Deponte from the Department of Chemistry at the Technische Universität Kaiserslautern. The study was conducted within the framework of the Priority Program (SPP 1710) "Dynamics of thiol-based redox switches in cellular physiology" of the German Research Foundation. "When we started the project, other research groups put forward two hypotheses on the mode of action of Kelch13," says Professor Dr. Marcel Deponte.

One assumption relies on a potential redox activity of the protein. "It resembles a central redox sensor of vertebrates in its structure," the biochemist continues. As mentioned above, the mutation in Kelch13 usually affects a cysteine residue. Cysteine contains sulfur and is potentially redox-active, i.e. it can chemically react with other molecules and exchange electrons. The antimalarial drug artemisinin, in turn, is a so-called peroxide, which is also redox active. "The first hypothesis now assumed that the effect of the antimalarial drug is altered by a redox process that depends on this protein," Deponte summarizes.

In parallel to this hypothesis, two other research groups have shown that Kelch13 is required for the uptake of hemoglobin from the erythrocytes into the parasite. Among them is the research group led by Dr. Tobias Spielmann from the Bernhard Nocht Institute for Tropical Medicine in Hamburg, who published their results in a study in the renowned journal Science. "The mutation impairs this uptake," Schumann added. In a collaboration with Markus Ganter and his research group at the Center for Infectiology at Heidelberg University Hospital, the impaired uptake of hemoglobin was also confirmed in the current study.

In his doctoral thesis, Schumann dealt with both hypotheses. He refuted the first hypothesis with his results: Among other things, he did this by exchanging the cysteine residue in Kelch13 and replacing it with a serine residue. "The amino acid serine is similar to cysteine in chemical structure, but is not redox active and does not have a sulfur residue," he explains. "We found no effect on the sensitivity to artemisinin and therefore ruled out redox activity in this context. The cause must be related to the tyrosine residue, which occurs naturally in the mutant variant."

Thus, Schumann turned his focus to the other assumption: Why is less hemoglobin taken up in the mutant? The Hamburg team had previously shown that hemoglobin uptake is reduced when a cysteine tyrosine mutation occurs. The team from Kaiserslautern has now investigated the influence of the concentration of the protein in the original variant of the parasite. "We have developed a pathogen strain in which we were able to change the amount of the Kelch13 protein," says Schumann.

To do this, the PhD student used a new technique: He regulated the protein using a ribozyme, a small RNA molecule that catalyzes chemical reactions like an enzyme. Schumann's conclusion: "Down-regulation of the protein concentration also results in a decreased sensitivity to artemisinin." But what is the exact cause of this? To answer this, Schuman wanted to look at the isolated protein.

A new method was also used in the process. After more than a year of work, he succeeded in producing a so-called recombinant Kelch13 protein in insect cells. Recombinant proteins are protein molecules that are produced in cell cultures or microorganisms using biotechnological methods. Schumann therefore worked closely with the European Molecular Biology Laboratory in Heidelberg, where he learned how to cultivate the insect cells.

The team finally purified and analyzed the isolated protein. Here, too, they have taken a new approach since other research groups have studied Kelch13 in the parasite. "We saw that the mutation causes the protein to misfold and that this impairs its action," Deponte summarizes. As a result, the pathogen can only absorb hemoglobin slowly, and early-stage parasites are delayed in their development, preventing the antimalarial drug from working in its time window.

Schumann's colleague Eileen Bischoff has continued the work on the purification and analysis of the protein. In addition, Sophie Möhring was essentially involved in establishing the cell culture of the parasite Plasmodium falciparum in the Kaiserslautern research group.

The study was published in the renowned journal "Redox Biology": "Protein abundance and folding rather than the redox state of Kelch13 determine the artemisinin susceptibility of Plasmodium falciparum".

Originalpublikation:
Redox Biology: Protein abundance and folding rather than the redox state of Kelch13 determine the artemisinin susceptibility of Plasmodium falciparum
DOI: https://doi.org/10.1016/j.redox.2021.102177