Tracking down microplastics in Antarctica 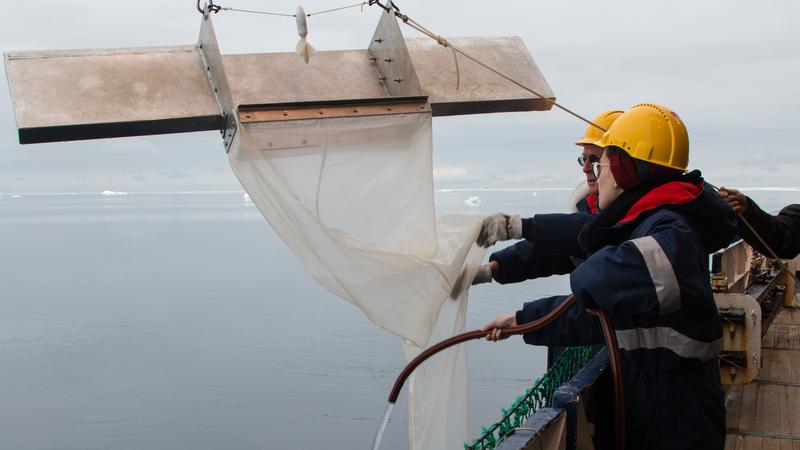 Microplastics are everywhere, even in the most remote places. Where do these tiny pieces of plastic come from? Researchers from the University of Basel and the Alfred-Wegener Institute have shown that it takes precise analysis to answer this question.

Microplastics are an environmental problem since organisms ingest these tiny particles and can be harmed by them. Even remote regions such as Antarctica are affected. To quantify this form of pollution and find out where the small particles come from, a research team from the Department of Environmental Sciences at the University of Basel and the Alfred-Wegener Institute (AWI) at the Helmholtz Centre for Polar and Marine Research on the island of Heligoland studied water from the Weddell Sea, a region with minimal human activity.

“This is the first time a study of this scope has been conducted in Antarctica,” says Clara Leistenschneider, doctoral candidate in the Department of Environmental Sciences at the University of Basel. In the course of two expeditions with the research vessel Polarstern in 2018 and 2019, the researchers took a total of 34 surface water samples and 79 subsurface water samples. They filtered approximately eight million liters of seawater in total and discovered microplastics in it – albeit in very small quantities. The researchers have published their results in the journal Environmental Sciences and Technology.

Earlier studies of microplastics in Antarctica were conducted in regions with more research stations, shipping traffic and people. The research team led by Professor Patricia Holm (University of Basel) and Dr. Gunnar Gerdts (AWI) thus hypothesized that the remote Weddell Sea would have substantially lower concentrations of microplastics. However, their measurements showed that concentrations are only partially lower than in other regions of Antarctica.

Paint and varnish are probably the main source

Establishing that microplastics are present in a given region is one thing. “But it's also important to know which plastics appear, in order to identify their possible origin and in the best case to reduce microplastic emissions from these sources,” explains Leistenschneider.

The researchers first analyzed the plastic composition of the particles filtered out of the seawater. They found that 47 percent of the particles identifiable as microplastics were made of plastics that can be used as a binding agent in marine paint. That means marine paint and therefore shipping traffic are presumably a key source of microplastics in the Southern Ocean.

Other microplastic particles were identified as polyethylene, polypropylene and polyamides. These are used in packaging materials and fishing nets, among other things. Leistenschneider cautions that although it is possible to determine the different plastics used, the exact origin or previous application of the microplastic fragments is not known.

In this study, more than half of all sample fragments had visual characteristics similar to the ship paint on the research vessel Polarstern on which the team was traveling. At the Center for Marine Environmental Sciences (Marum) at the University of Bremen, the researchers analyzed these fragments in more detail by means of X-ray fluorescence (XRF) to identify pigments and fillers, as the commonly used method – Fourier transform infrared microscopy (FT-IR) – did not identify these substances. Along with binding agents, they are an important component of paint and are analyzed in forensics, along with their plastic content, to identify, for example, cars in hit-and-run accidents. Paint slivers left at the accident site are, so to speak, the vehicle's fingerprints.

The analysis in Bremen showed that 89 percent of the 101 microplastic particles studied in detail did indeed originate from the Polarstern. The remaining 11 percent came from other sources. This result prompted Leistenschneider to comment: “A number of comparative methods must be used to determine the origin of paint particles.” This is the only way to accurately distinguish paint fragments found in the environment from contamination due to the research vessel.

Previous microplastics studies usually excluded particles similar to the paint on their own research vessels (based on the composition of binding agents and/or visual characteristics) as contamination without conducting further analysis.

Shipping traffic in the Southern Ocean has been increasing for some years, primarily as a result of increased tourism and fishing, but also due to research expeditions. “Developing alternative marine paint that is more durable and environmentally friendly would make it possible to reduce this source of microplastics and the harmful substances they contain,” Leistenschneider says in summary.

Originalpublikation:
Microplastics in the Weddell Sea (Antarctica): A forensic approach for discrimination between environmental and vessel-induced microplastics
Environmental Sciences and Technology (2021)