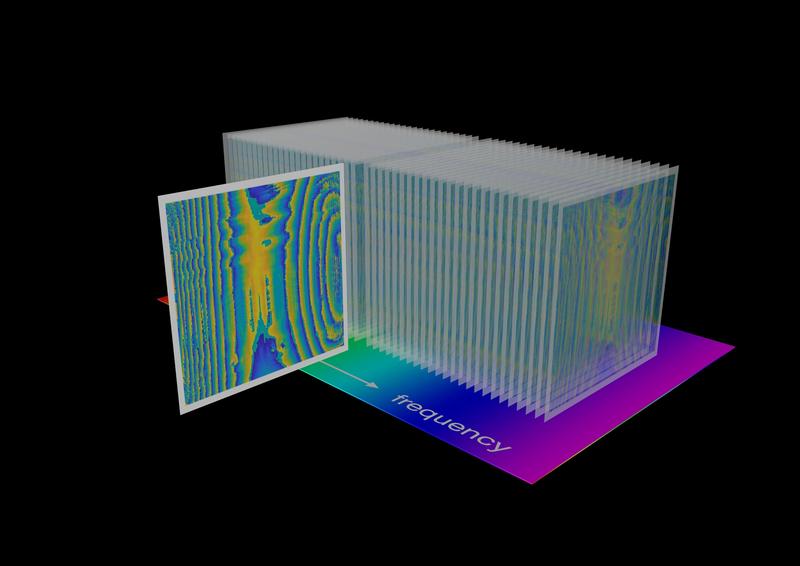 Reseachers at MPQ have just demonstrated a new technique for digital holography using two interfering frequency combs. They can now record thousands of holograms in all colours of the rainbow.

Everybody has seen holograms, on a bank note, a passport or in Star Wars. Holography is a powerful technique of photography of a light field without a lens for 3D imaging and display. Now, scientists at the Max-Planck Institute of Quantum Optics move holography forward by implementing it with optical frequency combs. Thousands of holograms over all colors of the rainbow can be recorded. By digital processing, each hologram provides a 3-dimensional image of the scene, where the focusing distance can be chosen at will. Combining all these holograms renders the geometrical shape of the 3-dimensional object with very high precision and without ambiguity. At the same time, other diagnostics can be performed by the frequency combs: here the scientist show molecule-selective imaging of a cloud of ammonia vapor.

Frequency combs go 3D! Reporting in Nature Photonics an international team of scientists in the group of Nathalie Picqué at the Max-Planck Institute of Quantum Optics (MPQ) in Garching, Germany, demonstrates a new imaging technique with optical frequency combs.

An optical frequency comb generator emits a regular train of short laser pulses. The spectrum consists of a large number of precisely equally spaced sharp spectral comb lines. Such frequency combs have made it possible to count the wiggles of a light wave with high precision. Theodor Hänsch, head of the Laser Spectroscopy Division at the MPQ, has shared the 2005 Nobel Prize in physics for this invention. Later on, in the technique of “dual-comb spectroscopy” developed at MPQ in the group of Nathalie Picqué, all the spectral lines of a frequency comb have been used to interrogate a sample simultaneously over a broad spectral range, and the comb lines of a second laser with slightly different spacing interfere on a fast photodetector for read-out.

The new imaging method of “hyperspectral digital holography” extends the same interference method to holographic imaging. “The setup appears deceptively simple. It only uses two comb generators of slightly different pulse repetition rates, a partly transmitting beam-splitting mirror, and a fast digital camera sensor without lens.”, explains post-doctoral researcher Edoardo Vicentini. A 3D object is illuminated by one of the pulse trains, and the scattered light is directed by the beam-splitter onto the camera sensor. The second pulse train is directed onto the same sensor as a reference beam. The camera registers a spatial interference pattern that changes with time, since the two lasers emit their pulses with a varying time separation. A video recording of such an interference pattern is shown in a supplemental video available from Nature Photonics: https://www.youtube.com/watch?v=f4sw7o31Lls

A computer calculates the radiofrequency spectrum of the interference signal for each pixel. These spectra are combined in a stack of digital holograms (Figure), one amplitude and phase hologram for each comb line.

In traditional holography, a fine interference pattern is recorded on film, and illumination of this hologram with a laser beam recreates the original wavefronts from the object by optical diffraction. In digital holography, the original scene is reconstructed by a computer program mimicking this process. In one of the reported experiments, two coins at different distances are used as objects. During digital reconstruction the focusing distance can be changed so that either of the coins appears in focus while the other appears blurred, as illustrated in the video. “I was thrilled when I got a Matlab program to work, that could produce our movie of reconstructed images rather quickly”, reports Theodor Hänsch. “However, with a faster camera of megapixel resolution, the amount of recorded data can become rather large so that data processing will become more challenging”.

Nathalie Picqué, pioneer of dual-comb spectroscopy, concludes: “Dual-comb interferometers already produce breathtaking results in spectroscopy and in ranging. The unique combination of broad spectral bandwidth, long temporal coherence and multi-heterodyne read-out offers powerful new features to holography. Our technique is likely to conquer new frontiers in scan-free wavefront reconstruction and three-dimensional metrology. Further, it will be exciting to explore its potential for microscopy of biological samples.“