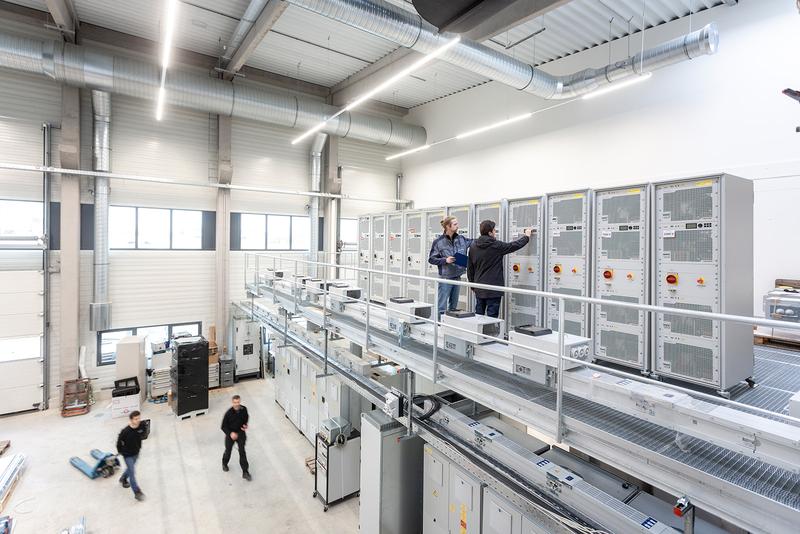 Large power stations with their large synchronous generators provide stability in the power grid, but are being successively powered down in the course of the energy transition. In order to address this issue, researchers at the Fraunhofer Institute for Solar Energy Systems ISE are working on how grid-forming converters can ensure a future supply of sinusoidal alternating current and stable grid frequency.

Whether flicking on the lights, charging the cell phone, keeping the milk cool in the fridge, or quickly vacuuming the house, we generally assume in day-to-day life that our power outlets are a reliable source of energy. However, our power grid actually has a quite complex design, and its typical level of balance is a delicate matter. The ideal form for energy following through the power lines in Europe is a sinusoidal alternating current with a nearly constant frequency of 50 hertz. This is made possible by the stability of the physical properties of synchronous generators in large power stations. These large power plants use their rotating mass to bring inertia to the system and, thus, react with an inertial response to grid disturbances. Potential shortfalls in energy generation can be compensated using the stored kinetic energy in the short term, thus bridging the time until further protection measures — such as the provision of control reserves — can be implemented. In this way, there are not immediate far-reaching losses of power in critical situations such as in the unplanned outage of large generation capacities or so-called “system splits.”

That said, nuclear and coal power plants are being removed from the grid and replaced by renewable forms of energy generation, and this trend will only intensify in the coming years. “This means that the synchronous generators, which play a central role in grid control, will be lost,” explains Dr. Sönke Rogalla, Head of the Power Electronics and Grid Integration Department at Fraunhofer ISE. In grid-forming converters, he and his research team see a promising solution for ensuring grid stability.

It’s all about the right programming

Converters are electronic power devices whose primary function is to convert direct current into alternating current. Depending on the power class, they can vary in their appearance from a small battery up to a large megawatt power plant. Their electric behavior is not physically determined, but rather must first be set via certain control algorithms. At present, converters are programmed such that they feed the desired amount of power into a stiff assumed power grid, provided by robust large power plants. Grid-forming converters, on the other hand, are programmed to behave as a voltage source. In a manner similar to that of conventional power plants, grid-forming converters respond to short-term demand in the grid and provide inertial response.

“For example, it is important that the devices in special cases such as overload situations, defective lines, or system splits respond in a reflexive manner and keep the grid stable,” says Roland Singer, Group Manager for Converter-Based Grids. “For this reason, we are performing research on the development of devices and algorithms. We can test various application scenarios with the aid of simulations as well as with the test infrastructure in our institute’s in-house Multi-Megawatt Lab in Freiburg.”

Comprehensive view in the “VerbundnetzStabil” project

According to Rogalla, there is consensus among the transmission system operators that grid-forming converters are necessary for a large share of the new plants being put onto the grid. In this context, the Fraunhofer ISE is standing alongside diverse power grid operators in an advisory role and, since 2017, has worked with various scientific and economic cooperation partners in the “VerbundnetzStabil” project (see infobox below). “Here we have managed to put together a unique arrangement of skills from the power electronics and control division as well as from grid dynamics and grid integration. This allowed us to get a comprehensive view of the use of and the precise requirements for grid-forming converters on a larger scale,” says Rogalla.

In the initial project phase, the requirements for future power grids were clarified and critical situations defined. This laid concrete groundwork for developing and programming devices along with the converter producer KACO new energy. In the Multi-Megawatt Lab, the researchers were then able to replicate a small-scale power grid and examine how the proportion of synchronous machines and grid-forming converters as well as the implemented controls in various fault scenarios affected the voltage stability.

Rogalla and Singer are very content with the results. “Our research clearly shows once again that a changeover from synchronous generators to grid-forming converters is a viable solution and the increasing urgency of such a changeover,” emphasizes Singer. “At the same time, we were able to clearly lay down what the grid of the future will actually require and, with the help of a test guideline that we drew up, provide suggestions for important technical details for which no clear standard yet exists,” adds Rogalla. “With the upcoming market launch of grid-forming converters, we want to thus help the industry in the technical evaluation of suitable devices.”

The final report for the project is currently being prepared. At the same time, the researchers want to check their devices and findings on the real power grid in one of the institute’s office areas. In a further research project which is currently being planned, the developed technology will be implemented in a large photovoltaic storage power plant and grid interactions examined under real conditions.