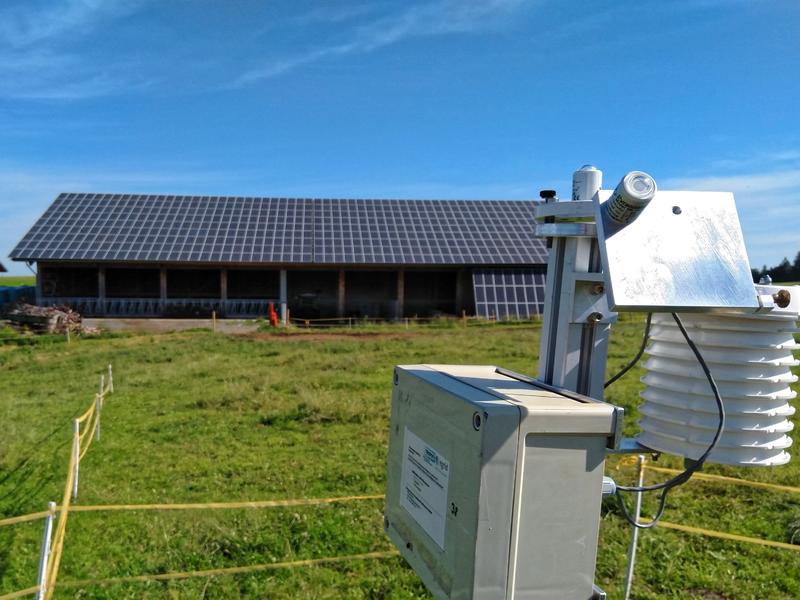 Leipzig. The expansion of renewable energies is placing increasing demands on the power grids. and in the process requires forecasts that are as precise as possible as to how much solar power will be fed into the grid. In addition to clouds, aerosol particles also strongly influence the amount of electricity generated by photovoltaic systems. Current air quality models are a good basis for estimating the production of solar electricity. However, they should be further improved.

This is the conclusion drawn by researchers from the Leibniz Institute for Tropospheric Research (TROPOS), the German Weather Service (DWD) and the International Centre for Sustainable Development (IZNE) at Bonn-Rhein-Sieg University of Applied Sciences.
As part of the joint project "MetPVNet", they have compared the reanalysis of the Copernicus Atmosphere Monitoring Service (CAMS) with real solar radiation measurement data from 25 DWD stations in Germany for one year. The study has now been published in the journal Atmospheric Chemistry and Physics (ACP).

The warming or cooling of the atmosphere does not only depend on clouds and greenhouse gases. Aerosol particles also play an important role. The tiny particles (also known as particulate matter) float in the air and, despite their small size, reflect and absorb some of the sun's energy. Too little is currently known about how strongly this effect influences the amount of electricity generated from photovoltaic (PV) systems. In the interdisciplinary research project "MetPVNet", experts from atmospheric research and the field of renewable energies therefore worked together to (further) develop innovative energy meteorological methods for predicting irradiation and PV output at plant level and to test them with practical partners.

As part of the joint project, which ran from 2017 to 2021, a study was also conducted which has now been published. This study examined the radiative effect of aerosol as an example for Germany during 2015 on the ground and within the atmosphere using two complementary modelling approaches: Firstly, data on solar radiation in cloud-free situations from 25 stations of the observation network of the German Weather Service (DWD) and the global AERONET network throughout Germany were considered. On the other hand, the radiative effect was estimated by explicit radiative transfer simulations based on the reanalysis of the Copernicus Atmosphere Monitoring Service (CAMS) of the European Union (ESA) on atmospheric composition.
The evaluation which has now been published demonstrated for the example year 2015 that there is a clear gradient in solar energy in Germany: Due to the higher position of the sun, it shines more intensively in the south of the Federal Republic on an annual average of up to 0.5 megawatt hours per square metre than in the north. Due to aerosol from continental sources, solar energy is dimmed in the east of Germany compared to the west. Both effects overlap and ensure that the annual average yield of photovoltaic systems on the Neisse River in the far east of Germany is up to 0.05 megawatts per square metre lower than in the Alps in the far south of Germany. In practice, a variety of other influencing factors from cloud cover to the height of the solar installation play a role.

"The radiative effect of aerosol should definitely be taken into account in daily solar power forecasts. The CAMS model of the European climate observation programme Copernicus is a good basis, but it should also be further improved so that grid operators can better control the increasing share of electricity from photovoltaic systems in their power grids. Our basic research thus provides an important building block for the energy transition and emphasises the social relevance of aerosol research beyond air quality," emphasises Dr. Hartwig Deneke, head of the Satellite Remote Sensing working group at TROPOS. His working group mainly uses satellite data to investigate the properties of clouds and aerosol and to determine their influence on solar and terrestrial radiation.

The study also underlines that ground measurements of solar radiation are important as a reference, since the actual solar energy on solar arrays varies greatly and this can so far only be partially predicted by air quality models. The published analysis is an important step towards an accurate solar weather report, but the road ahead is still long. "In our study, we were only able to study one year. However, solar radiation and air quality sometimes fluctuate significantly between years. Therefore, in the next step, we want to consider a longer time period, from 2003 to 2021, and we are curious to see whether our findings from 2015 are also applicable to other years," explains Jonas Witthuhn from TROPOS. Not only electricity grid operators in Germany, but also worldwide could benefit from an improved forecast of photovoltaic output. Tilo Arnhold

The Leibniz Institute for Tropospheric Research (TROPOS) is member of the Leibniz Association, which connects 96 independent research institutions that range in focus from the natural, engineering and environmental sciences via economics, spatial and social sciences to the humanities. Leibniz Institutes address issues of social, economic and ecological relevance. They conduct knowledge-driven and applied basic research, maintain scientific infrastructure and provide research-based services.
The Leibniz Association identifies focus areas for knowledge transfer to policy-makers, academia, business and the public. Leibniz institutions collaborate intensively with universities – in the form of “Leibniz ScienceCampi” (thematic partnerships between university and non-university research institutes), for example – as well as with industry and other partners at home and abroad.
They are subject to an independent evaluation procedure that is unparalleled in its transparency. Due to the importance of the institutions for the country as a whole, they are funded jointly by the Federation and the Länder, employing some 20,000 individuals, including 10,000 researchers.
The entire budget of all the institutes is approximately 1.9 billion euros. They are financed jointly by the Federal Government and the Länder. The basic funding of the Leibniz Institute for Tropospheric Research (TROPOS) is therefore financed by the Federal Ministry of Education and Research (BMBF) and the Saxon State Ministry of Science and the Arts (SMWK). The Institute is co-financed with tax revenues on the basis of the budget approved by the Saxon State Parliament.
https://www.leibniz-gemeinschaft.de/en/home/
https://www.bmbf.de/en/index.html
https://www.smwk.sachsen.de/