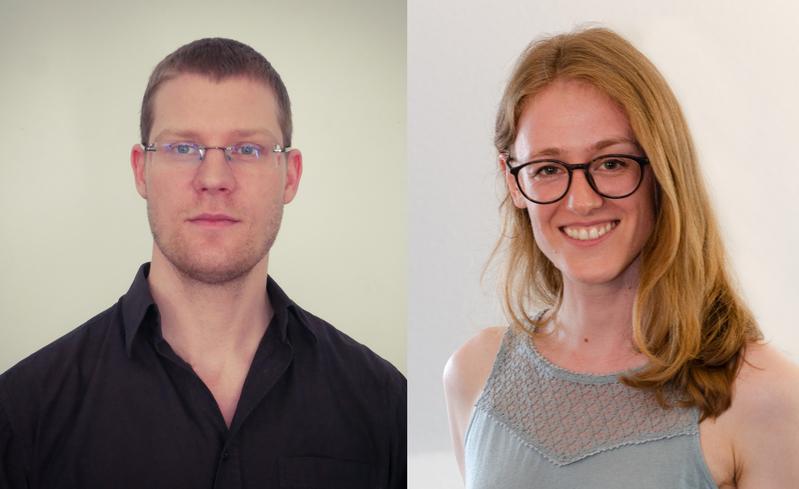 Two young researchers have been awarded this year's Christoph Schmelzer Prize: Dr. Theresa Suckert from the Technical University of Dresden and German Cancer Consortium (DKTK), partner site Dresden, and Dr. Felix Horst from the University of Giessen. With this award, the Association for the Promotion of Tumor Therapy with Heavy Ions e.V. annually honors outstanding master's respectively doctoral theses in the field of tumor therapy with ion beams.

Unfortunately, due to the current pandemic situation the award ceremony that was planned for November 25 at the GSI Helmholtzzentrum für Schwerionenforschung in Darmstadt had again to be cancelled, as already in 2020. However, a special seminar will be held beginning of 2022 were the awardees will be given an opportunity to present their work to the interested community. Also the two 2020 award winners, Dr. Alina Bendinger from the German Cancer Research Center DKFZ Heidelberg and Dr. Giorgia Meschini from the State Polytechnic University in Milan (Politecnico di Milano) will contribute to this seminar.

In her PhD thesis entitled „Normal brain tissue reaction after proton irradiation“ Theresa Suckert has investigated the damaging effects on the normal tissue in the brain after proton irradiation, a highly relevant topic for clinical applications of proton beams. She has analyzed the potential of tissue slice cultures as surrogate for in-vivo experiments, and she has gained important insights into the applicability of this approach to investigate radiation induced tumor and normal tissue response. Furthermore, based on a mouse model she has performed challenging experiments, aiming at the high precision irradiation of small, clinically relevant subvolumes of the mouse brain. Therefore, she has developed and implemented the complete, very complex workflow including imaging, treatment planning, positioning verification, dosimetry as well as tissue excision and preparation. This approach represents an essential basis for upcoming preclinical experiments aiming at the further elucidation of ion specific radiation response mechanisms.

Dr. Felix Horst has performed experiments to determine nuclear reaction cross sections of light ions in the therapeutically relevant energy range; his PhD thesis is entitled „Measurement of Nuclear Reaction Cross Sections for Applications in Radiotherapy with Protons, Helium and Carbon Ions”. He has performed these experiments at the medical ion beam centers at Marburg (MIT) and Heidelberg (HIT). His results allowed the optimization of nuclear reaction models and with that substantially improving the therapeutic dose calculations. The direct implementation of these improved models in treatment planning for patients treated with Helium ions at HIT highlights the particular clinical relevance. An additional part of the PhD thesis aimed at improved measurements of reaction cross sections of radiation induced positron emitters, which are relevant for an increased accuracy of range verification measurements based on the PET method. The PET method allows precise monitoring of patient irradiation with ion beams.

The prize money for the dissertations is 1500 Euro each. The award is named after Professor Christoph Schmelzer, co-founder and first Scientific Managing Director of GSI. The promotion of young scientists in the field of tumor therapy with ion beams has meanwhile been continuing for many years, and the award was presented for the 23rd time. The topics of the award-winning theses are of fundamental importance for the further development of ion beam therapy and often find their way into clinical application.

The Association for the Promotion of Tumor Therapy supports research activities in the field of tumor therapy with heavy ions with the aim of improving the treatment of tumors and making it available to general patient care. At the accelerator facility at GSI, more than 400 patients with tumors in the head and neck area were treated with ion beams as part of a pilot project from 1997 to 2008. The cure rates of this method are sometimes over 90 percent and the side effects are very low. The success of the pilot project led to the establishment of clinical ion beam therapy centers in Heidelberg and Marburg, where patients are now regularly treated with heavy ions.