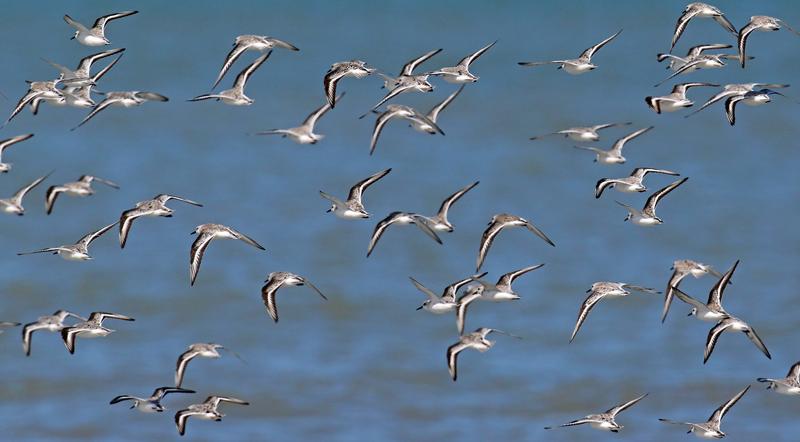 Migratory birds are specially adapted to find their way over extreme distances that represent remarkable tests of endurance. Now, researchers of the Max Planck Institute for Ornithology in Seewiesen and colleagues have discovered an unexpected way that migratory birds keep their cool during such arduous journeys: lighter-colored feathers.

"We found across nearly all species of birds, migratory species tend to be lighter colored than non-migratory species,” said Kaspar Delhey of the Max Planck Institute for Ornithology, Seewiesen, Germany. “We think that lighter plumage coloration is selected in migratory species because it reduces the risk of overheating when exposed to sunshine. Lighter surfaces absorb less heat than darker ones, as anybody wearing dark clothes on a sunny day can attest! This would be particularly important for long-distance migrants that undertake extensive flights during which they cannot stop to rest in the shade.”

Delhey and colleagues had been studying the effects of climate on bird coloration. Their earlier studies showed that, in general, lighter colored birds are found where temperatures are high and there is little shade. Presumably that’s at least in part because the birds’ lighter plumage helps to keep them cooler in the hot sun. Around that same time, the researchers came across studies by others showing that some birds fly at much higher altitudes during the day compared to at night.

“Because flying at high altitude is likely costly, these changes required an explanation,” Delhey says. “One possibility was that flying higher, where it is colder, would offset the heat absorbed by the plumage when the sun was shining.”

If so, they realized, another way to reduce the risk of overheating would be to absorb less solar radiation in the first place. It raised a question: have migratory species evolved lighter feathers?

To find out, they quantified overall plumage lightness (from 0 = black to 100 = white) for all bird species, using bird images from the Handbook of the Birds of the World (https://birdsoftheworld.org). Next, they compared the data on coloration with the species’ migratory behavior, while controlling for other factors known to effect plumage color.

Overall, the findings show that bird species get increasingly lighter as they migrate more. So, resident birds tend to be darker than short-distance migrants. Short-distance migrants are darker than bird species that travel farther. Delhey said that the one of the biggest surprises was how consistent the effect was across different types of birds. They saw the same pattern in birds large and small. The same held true in waterbirds and land-dwelling birds, too.

The findings are another reminder of the important role of temperature and climate factors more broadly in shaping the evolution of animal coloration. They also have clear implications for understanding the impacts of global warming and potential adaptive evolutionary responses, the researchers say.

Delhey notes that many factors influence bird coloration and light colors are but one of many ways that migratory birds can avoid overheating. His team will continue exploring the connections between migration, climate, and other selective factors that shape the evolution of plumage colors in birds. They also suggest, in light of the new findings, that future studies should directly test how migratory species cope with thermoregulatory challenges.