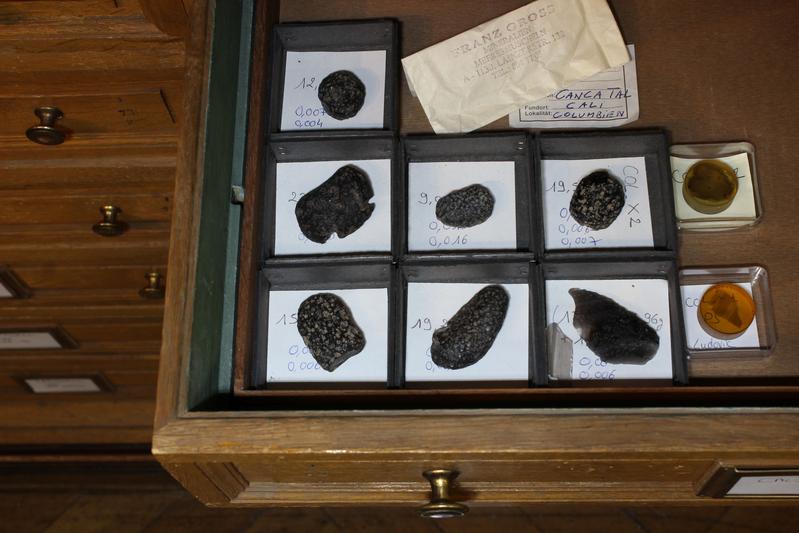 What Alexander von Humboldt had already suspected 200 years ago has now been confirmed by an international team of scientists: The unusual Cali glass from Colombia was not formed during a meteorite impact but is a volcanic glass.

Glass is a very common material in our daily life, but it also exists in nature. Natural glass occurs on Earth in different geological contexts, mainly as volcanic glass or obsidian (due to the rapid cooling of lava; it shows a water content typically higher than 0.1 %), rarely as fulgurite (glass formed by the fusion of sand or rock during a lightning strike), and impact glass, formed during meteorite impact events. The distinction between the various types of glass on Earth, the Moon, or other planets can often be challenging.

The recent study of an international team of scientists, led by Dr. Ludovic Ferrière, curator of the meteorite collection at the Natural History Museum Vienna, was published in the scientific journal “Geology”. The case of the Cali glass shows, that it is possible to distinguish between different formation modes using a multimethod approach. The black Cali glass – found near the city of Cali in western Colombia – was previously suggested to be either of impact or volcanic origin, an unsolved debate which goes back to the year 1823, when it was first described by the famous German naturalist and explorer Alexander von Humboldt. Until the beginning of the 20th century, it was assumed to be an unusual type of volcanic glass, but later some scientists thought of it as an impact glass, or so-called tektite.

Detailed scientific research by the team of Austrian, Brazilian, and Columbian scientists around Dr. Ludovic Ferrière were able to definitively exclude an impact origin and classified the Cali glass as volcanic glass. “Von Humboldt was right from the start about the origin of this glass”, says Dr. Ludovic Ferrière. “Our results also suggest that other unusual glass occurrences, for which a meteorite impact origin has been suspected but not fully proven, should be reexamined using the same methodology we have used”, adds Ferrière.

This work also shows how important the collections of museums are. For this study, the team worked with historical samples from the Natural History Museum’s collection and with a set of samples that were recently collected in the field.
“Natural history collections are demonstrably important – not only for curious visitors or for cultural reasons. When scientists need samples for research, they turn to the collections behind the scenes”, says Dr. Katrin Vohland, director general of the Natural History Museum Vienna.