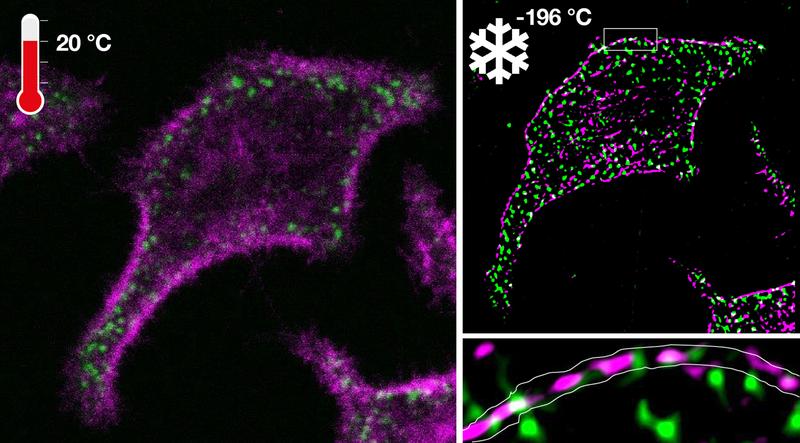 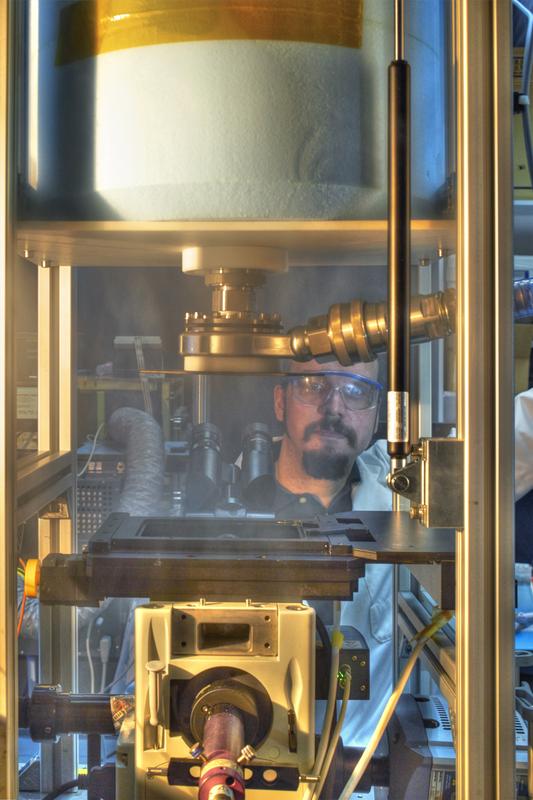 Fluorescence light microscopy has the unique ability to observe cellular processes over a scale that bridges four orders of magnitude. Yet, its application to living cells is fundamentally limited by the very rapid and unceasing movement of molecules and the light-induced destruction of fluorescent probes. Ultrarapid cryo-arrest of cells during live observation on a microscope, as developed by the group of Prof. Philippe Bastiaens the at the Max Planck Institute of Molecular Physiology in Dortmund, now circumvents these fundamental problems and thereby enables the observation of molecular patterns of life that are otherwise invisible.

The almost 100 trillion cells of our body are alive because they maintain themselves in a permanently active state by continuous energy consumption. The microscopic patterns that constitute a cell thereby originate from the ever-dynamic behavior of billions of nanometer-sized biomolecules, like proteins, lipids, nucleic acids and other molecules, that bustle around in a seemingly unorganized way. To observe how higher scale organization emerges from this incessant activity, biomolecular species can be selectively equipped with fluorescent probes. These fluorescent molecules are photon catalysts: they absorb high energy photons (e.g. blue light) and subsequently emit lower energy (red-shifted) photons. These photons can be imaged through a microscope to not only precisely localize the labeled biomolecules, but also report on local molecular reactions. However, light-induced destruction of the probes and blurring through the very vital molecular motion are two fundamental problems that hamper observations of how the molecular processes of life generate structure at the cellular scale.

An uncertainty principle to fluorescence microscopy

How well a certain structure or molecule is actually resolved by fluorescence microscopy depends fundamentally on the amount of light that can be collected from this structure. This is analogous to trying to see the stars in the night skies. Only those stars that are clearly brighter than their surroundings are visible at first sight. If we photograph the night sky with a long exposure time, more stars become visible that however become blurred by the Earth's rotation. Similarly, in fluorescence microscopy exposure time can be prolonged to increase the amount of detected light. However, microscopic structures never stand still, but exhibit random as well as directed motion. Prolonging the exposure time thereby leads to blurring of the structures. In this case, however, the movement of small structures is much faster than the photon catalysis by the fluorophore and therefore the accuracy cannot be improved by creating better detectors or stronger illumination. Even more, the process of photon catalysis produces toxic radicals, which not only destroy molecular processes and eventually kill the cells, but also destroy the fluorescent molecule itself. This ultimately limits the amount of light that can be collected from the probes in the living cells.

The solution is literally very cool

Jan Huebinger in the group of Philippe Bastiaens has now developed a technology to arrest molecular activity patterns during observation of their dynamics in living cells at any timepoint of interest within milliseconds directly on the fluorescence microscope. By this, both fundamental problems of motional blur and photodestruction can be bypassed at the same time.
The arrest is done by extremely fast cooling to temperatures that are so cold (-196°C), that the molecular movement is virtually stopped. The arrest had to be very fast for two reasons. First, the energized microscopic patterns that define living cells disintegrate into the dead state if the arrest is too slow. Second, the speed of the arrest had to be faster than the process of ice formation, which would destroy the cells. This can also be observed on a larger scale, when e.g. tomatoes become very mushy after freezing. Ice formation happens extremely fast in the critical range between 0 °C and -136 °C. However, non-intuitively, at very low temperatures (below -136 °C) ice crystals can actually not form any more, because the motion of water molecules is also virtually stopped. This means literally, that cooling had to be faster than 100,000°C per second. The researchers have mastered this technical challenge by developing a ultrarapid cooling device that is integrated with a microscope where the cold of liquid nitrogen (-196°C) is accelerated under high pressure onto a diamond. The same diamond also holds the sample containing the cells on its opposing side. The high pressure burst in combination with exceptional heat conductance of the diamond allowed to achieve the necessary high cooling rates to arrest cells at -196°C in their native configuration. This not only solved the problem of motional blur but also stop photochemical destruction. This opens up the possibility of virtually infinite exposure, highlighting molecular patterns that are otherwise obscured in the noise.

Ultrarapid cryo-arrest allowed the use of normally destructive high laser powers to analyze native molecular patterns at tens-of-nanometer resolutions that were otherwise invisible. What is more, because of the absence of photodestruction at -196 °C, the same arrested cells could be observed by different microscopy modalities to measure patterns from the molecular to the cellular scale. This new technology thereby led to the discovery of nanoscopic co-organization of an oncoprotein and a tumor suppressor protein that safeguards cells from exhibiting malignant behavior. “This is an enabling step for fluorescence microscopy, especially the combination of super-resolution microscopy and microspectroscopy that allow the mapping of molecular reactions in cells at multiple scales. It will change the way we observe molecular organization and reaction patterns in cells and therefore provide more insight in the self-organizing capabilities of living matter”, says Philippe Bastiaens.