How organic neuromorphic electronics can think and act 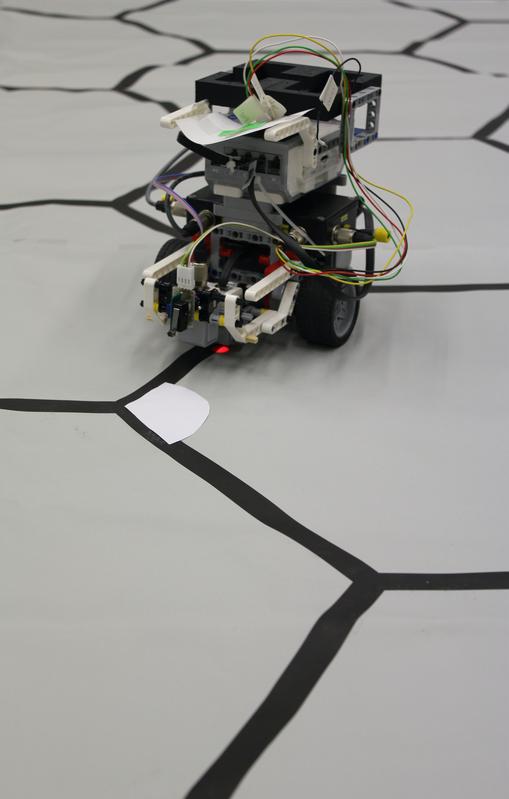 The human brain works differently than a computer - while the brain works with biological cells and electrical impulses, a computer uses silicon-based transistors. Scientists led by Paschalis Gkoupidenis, group leader at the Max Planck Institute for Polymer Research, have now combined the two worlds in a large-scale research collaboration. They have equipped a toy robot with a smart and adaptive electrical circuit made of soft organic materials, similarly to the biological matter. With this bio-inspired approach, they were able to teach the robot to navigate independently through a maze using visual signs for guidance.

The processor is the brain of a computer - an often-quoted phrase. But processors work fundamentally differently than the human brain. Transistors perform logic operations by means of electronic signals. In contrast, the brain works with nerve cells, so-called neurons, which are connected via biological conductive paths, so-called synapses. At a higher level, this signaling is used by the brain to control the body and perceive the surrounding environment. The reaction of the body/brain system when certain stimuli are perceived - for example, via the eyes, ears or sense of touch - is triggered through a learning process. For example, children learn not to reach twice for a hot stove: one input stimulus leads to a learning process with a clear behavioral outcome.
Scientists working with Paschalis Gkoupidenis, group leader in Paul Blom's department at the Max Planck Institute for Polymer Research, have now applied this basic principle of learning through experience in a simplified form and steered a robot through a maze using a so-called organic neuromorphic circuit. The work was an extensive collaboration between the Universities of Eindhoven, Stanford, Brescia, Oxford and KAUST.
"We wanted to use this simple setup to show how powerful such 'organic neuromorphic devices' can be in real-world conditions," says Imke Krauhausen, a doctoral student in Gkoupidenis' group and at TU Eindhoven (van de Burgt group), and first author of the scientific paper.
To achieve the navigation of the robot inside the maze, the researchers fed the smart adaptive circuit with sensory signals coming from the environment. The path of maze towards the exit is indicated visually at each maze intersects. Initially, the robot often misinterprets the visual signs, thus it makes the wrong “turning” decisions at the maze intersects and loses the way out. When the robot takes these decisions and follows wrong dead-end paths, it is being discouraged to take these wrong decisions by receiving corrective stimuli. The corrective stimuli, for example when the robot hits a wall, are directly applied at the organic circuit via electrical signals induced by a touch sensor attached to the robot. With each subsequent execution of the experiment, the robot gradually learns to make the right “turning” decisions at the intersects, i. e. to avoid receiving corrective stimuli, and after a few trials it finds the way out of the maze. This learning process happens exclusively on the organic adaptive circuit.
"We were really glad to see that the robot can pass through the maze after some runs by learning on a simple organic circuit. We have shown here a first, very simple setup. In the distant future, however, we hope that organic neuromorphic devices could also be used for local and distributed computing/learning. This will open up entirely new possibilities for applications in real-world robotics, human-machine interfaces and point-of-care diagnostics. Novel platforms for rapid prototyping and education, at the intersection of materials science and robotics, are also expected to emerge." Gkoupidenis says.
The scientists have now published their experiment in the renowned journal Science Advances.