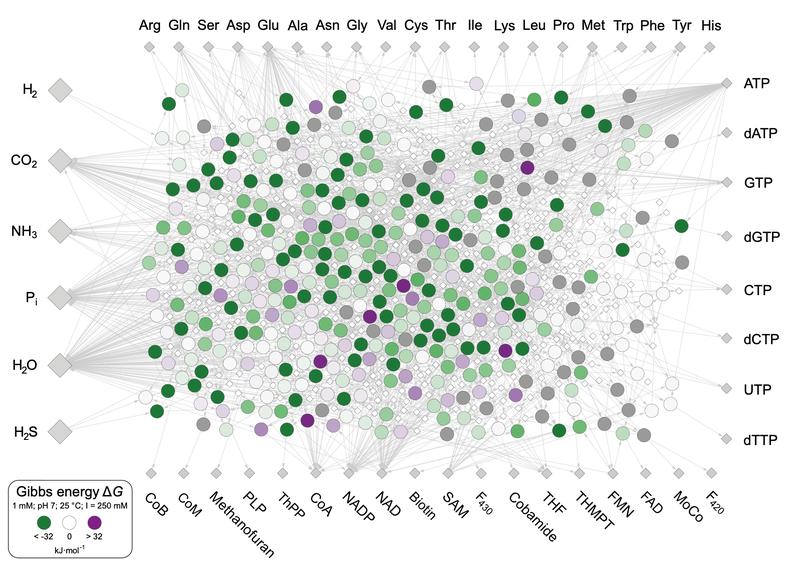 How did the first chemical reactions get started at the origin of life and what was their source of energy? Researchers at the Heinrich Heine University Düsseldorf (HHU) have reconstructed the metabolism of the last universal common ancestor, LUCA.

How did the first chemical reactions get started at the origin of life and what was their source of energy? Researchers at the Heinrich Heine University Düsseldorf (HHU) have reconstructed the metabolism of the last universal common ancestor, LUCA. They found that almost all chemical steps used by primordial life to piece together the molecular building blocks of cells are energy releasing reactions. This identified the long-sought source of energy needed to drive these reactions forward, which has been hiding in plain sight. The energy required to synthesize the building blocks of life comes from within metabolism itself, as long as one essential starting compound is included. The secret ingredient that releases the energy from within at life's origin is the cleanest, greenest, newest and oldest of all energy carriers: Hydrogen gas, H2.

The team of Prof. Dr. William Martin in the Institute for Molecular Evolution at the HHU investigates how and where life arose on the early Earth. Their approach is experimental and computational. In the laboratory, they run chemical experiments to investigate reactions between hydrogen and carbon dioxide, CO2, using catalysts and conditions found in submarine hydrothermal vents. At the computer, they have developed a form of molecular archaeology that allows them to uncover the many different traces of primordial life that are preserved in the proteins, DNA and chemical reactions of modern cells.

In their latest work, they investigated the question of what kind of chemical environment fostered the chemical reactions that gave rise to metabolism, and later to LUCA itself, and where the energy came from that was needed to drive those reactions forward. To do that, they looked not at genes, but at the information contained within the chemical reactions of life themselves. They identified 402 metabolic reactions that have gone virtually unchanged since the origin of life roughly 4 billion years ago. Because these reactions are common to all cells, they were also present in LUCA. They shed light on how primordial life dealt with energy in metabolism and where it obtained the energy needed to make life's chemical reactions go forward.

Jessica Wimmer, a PhD student in the institute and lead author on the new paper, was particularly interested in the energy balance of LUCA's metabolic reactions, because all life requires energy. For that she made a catalogue of the 402 reactions that the simple and ancient among modern cells — bacteria and archaea — use to construct the building blocks of life: the 20 amino acids, the bases of DNA and RNA, and the 18 vitamins (cofactors) that are essential for metabolism. In the most primitive of modern cells, and in Wimmer's computer analyses, these compounds are synthesized from simple molecules that are present in the modern environment and that were also present in hydrothermal vents on the early Earth: hydrogen (H2), carbon dioxide (CO2) and ammonia (NH3). The result was the metabolic network of LUCA.

When asked about the motivation behind the central question of the new study, Jessica Wimmer says: "We wanted to know where the energy came from that drove primordial metabolism forward. At the very onset of metabolic reactions some 4 billion years ago, there were no proteins or enzymes to catalyze reactions because they had not yet evolved. Metabolism had to arise from reactions that could take place in the environment, perhaps with help from inorganic catalysts. But catalysts or not, in order to go forward, the reactions have to release energy. Where did that energy come from? There have been lots of suggestions for possible sources of metabolic energy in the literature. But nobody ever looked into the reactions of metabolism itself." To find sources of energy in metabolic reactions, the team calculated the amount of free energy, also called Gibbs energy, that is released or consumed in each reaction.

The result: LUCA's metabolism required no external source of energy such as UV light, meteorite impacts, volcanic eruptions, or radioactivity. On the contrary, in an environment typical of many modern submarine hydrothermal vents, the energy needed for the reactions of metabolism to go forward stems from within metabolism itself. Stated another way, almost all of LUCA’s metabolic reactions liberate energy all by themselves: the energy for life stems from life itself. Martin, senior author of the study, says: "That is exciting, because the 400 interconnected reactions of central metabolism, which seem so hopelessly complex upon first encounter, suddenly reveal a natural tendency to unfold all by themselves under the right conditions."

To arrive at that conclusion, the team had to first investigate the energetics of the 402 reactions using computer programs that simulate different environmental conditions, so as to distinguish energetically favorable from unfavorable combinations. This is important because whether or not a reaction releases energy often depends upon environmental conditions. They surveyed conditions ranging from pH 1 (acidic) to pH 14 (alkaline), temperatures from 25 to 100 °C, and different relative amounts of reactants to products. They looked with particular care at the energetic role of hydrogen. Wimmer: "Without hydrogen, nothing happens at all, because hydrogen is required to get carbon from CO2 incorporated into metabolism in the first place."

The energetically optimal conditions fall within an alkaline pH range around pH 9 and a temperature around 80 °C, with hydrogen required for CO2 fixation. Putting this result in context, Martin explains: "This is almost exactly what we see at Lost City, a H2-producing hydrothermal field in the Mid-Atlantic. In an environment like that, about 95–97 % of LUCA’s metabolic reactions could go forward spontaneously, that is, without the need for any other source of energy. In the abyssal darkness of hydrothermal systems, H2 is chemical sunlight. Modern energy research exploits exactly the same properties of hydrogen as life does. It is just that life has four billion years of experience with hydrogen technology, while we are just getting started."

Jessica Wimmer adds: "Regarding energy at life's origin, we can say that pure chemical energy is sufficient. We need no sunlight, no meteorites, no UV light: just H2 and CO2, plus some ammonia and salts. Because of the extremely conserved nature of the chemical reactions in our biosynthetic network, we can obtain some interesting insights into the reactions that gave rise to LUCA, even though it lived four billion years ago.“

Detailed caption:
The Metabolism of LUCA. The research team investigated 402 biochemical reactions that are required for the biosynthesis of the molecular building blocks of life. Each circle represents one reaction, its color represents the energy that is released at each reaction. Green means energy is released, violet means energy is required.