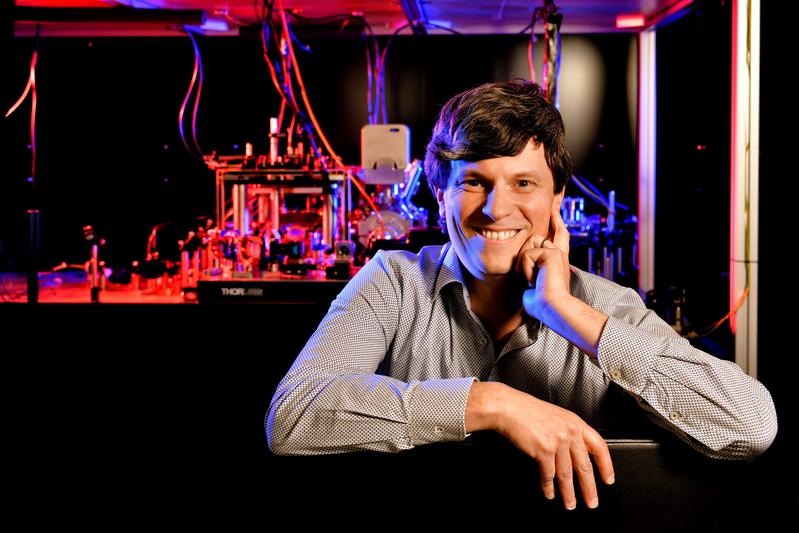 Quantum simulators with "trapped" Rydberg atoms are a promising approach to compute the interplay of many interacting quantum particles and have seen a very fast development in recent years. However, their computation time (coherence time) is limited by the finite lifetime of the Rydberg state. As part of the CiRQus project (Quantum simulation with circular Rydberg atoms), physicists at the University of Stuttgart now want to increase this lifetime by a factor of 1000. The German Federal Ministry of Education and Research (BMBF) is funding the project with 2.6 million euros over five years as part of the competition "Quantum Futur".

Rydberg atoms are atoms in highly excited states, which can be trapped with laser beams in the form of optical tweezers. 2D arrays of optical tweezers already allow for the creation of flexible arrays of hundreds of interacting atoms that can be used as qubits. However, the coherence time of modern Rydberg quantum simulators has so far been only about 10 microseconds. "In this project, I want to increase the coherence time of the Rydberg platform to more than 10 milliseconds," says project coordinator Dr. Florian Meinert of the 5th Institute of Physics at the University of Stuttgart, describing his goal. To achieve this, he and his team want to use so-called "circular" Rydberg states as a novel qubit for quantum simulations.

Perfect control of these circular Rydberg atoms in atomic beams has already enabled research on fundamental aspects of the quantum nature of light, for which the French physicist Serge Haroche was awarded the 2012 Nobel Prize in Physics, along with American David Wineland. The goal of the "CiRQus" project is now to extend this control to laser-cooled and trapped atom arrays in order to exploit the extraordinary potential of circular states for quantum simulations.

An innovative concept to achieve this is being investigated at the 5th Institute of Physics at the University of Stuttgart. "Indeed, the long coherence time of circular Rydberg states is not simply given to us. It is crucial that we eliminate microwave radiation, which is present everywhere in our quantum optics labs as blackbody radiation, because it disturbs the coherence of our qubit," Meinert emphasizes. With his group, he will use a specially designed capacitor to suppress microwaves for this purpose. This will make it possible to avoid the otherwise necessary cooling with expensive liquefied gases.

The quantum simulator with circular Rydberg atoms enables a variety of applications, such as the simulation of quantum materials or the solution of optimization problems. The long coherence time will be first exploited to study many-body dynamics in 2D quantum magnets on this platform. In perspective, perfect control over trapped circular Rydberg atoms also offers promising opportunities for novel qubit concepts for digital quantum computing with neutral atoms.