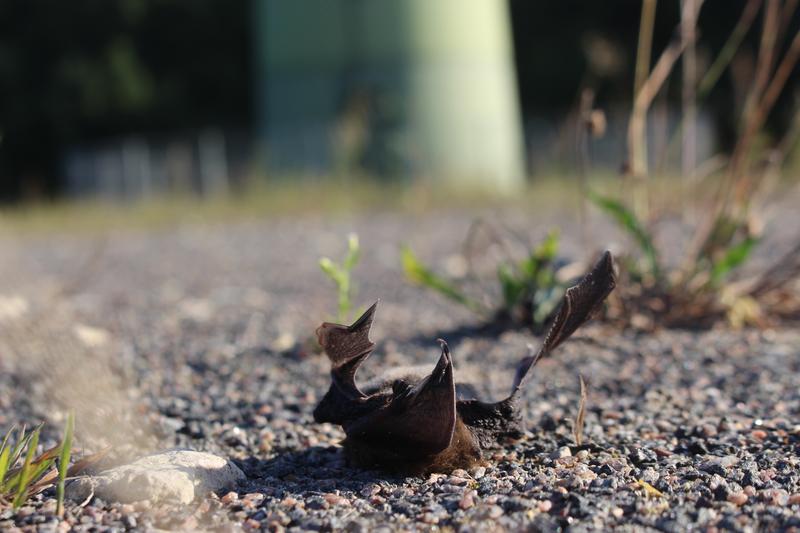 Many bats die at wind turbines when colliding with the spinning blades. Currently it is unclear whether all age cohorts or sexes are equally vulnerable. A comparison of age, sex and geographic origin of Nathusius’ pipistrelles killed at wind turbines and living conspecifics from nearby populations now reveals that juveniles are killed more frequently than adults compared to their proportion in local populations. Females are killed more frequently than males – yet in line with their higher proportion in local populations.

Females are killed more frequently than males – yet in line with their higher proportion in local populations. The high number of killed females and the elevated vulnerability of juveniles may have a negative effect on the long-term survival of populations, indicating that the current practice of wind energy production may not be ecologically sustainable. The investigation was led by scientists from the Leibniz Institute for Zoo and Wildlife Research (Leibniz-IZW) and is published in the scientific journal “Ecological Applications”.

In an effort to reduce the negative effects of CO2 emissions on global climate, many countries are promoting energy production from renewable sources such as wind. Although being considered environmentally friendly, wind energy production comes at notable costs to biodiversity. First, animal populations may suffer from habitat loss during wind turbine constructions in sensitive areas such as forests or wetlands. Second, birds and bats may be killed by operating turbines, either by directly colliding with the rotating blades of turbines or – in the case of bats – by a so-called barotrauma in the tailwind vortices of the spinning blades. Until now, it was unclear whether some age cohort or sex of bats may be particularly vulnerable to encounters with wind turbines. A higher vulnerability of, for example, female or juvenile bats might have strong conservation implications.

Although the proportion of females among the killed bats was not higher than in the local population, Voigt and his team still consider the death of female bats a conservation concern for the migratory bats. “Females and juveniles are extremely important for ensuring the long-time viability of populations. Protecting juvenile and female bats from being killed should be a high-priority goal for planning and operation of wind parks”, concludes Voigt.
Voigt and his colleagues looked into the characteristics of about 650 individuals of Nathusius’ pipistrelles bats during the summer migration period in Germany. They statistically evaluated sex, age and geographic origin for both killed bats (119) and individuals from local populations (524) caught in nets or observed in artificial daytime roosts. In order to distinguish regional bats from conspecifics originating from balto-russian populations, they analysed stable hydrogen isotopes in the fur of bats. “In contrast to sex and age, the origin of a bat does not influence the likelihood of being killed at wind turbines,” says first author Cecília Kruszynski de Assis, doctoral student in the Leibniz-IZW Department of Evolutionary Ecology. “However, our investigation demonstrates that wind turbines can have uneven effects on migratory bats. Schemes to mitigate wind turbine mortality, such as elevated cut-in speeds, should be implemented throughout Europe to prevent population declines of migratory bats.”