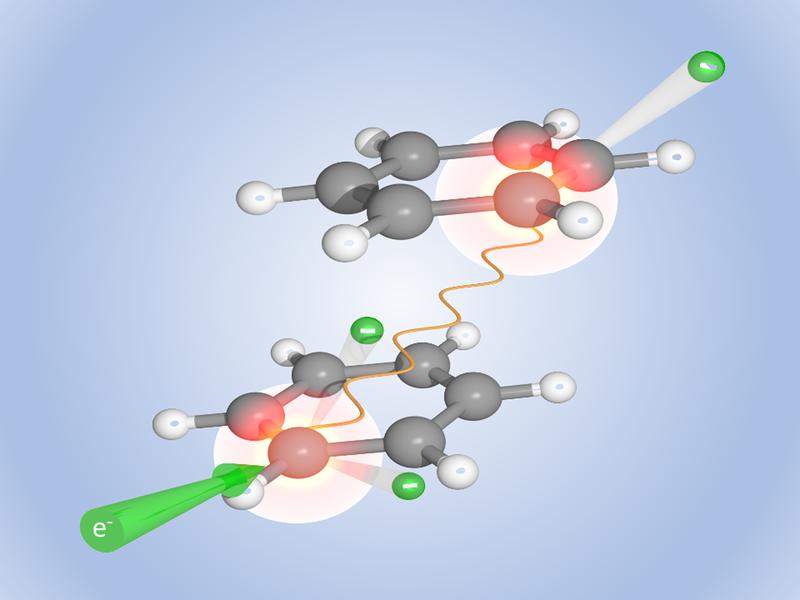 When cells are exposed to ionising radiation, more destructive chain reactions may occur than previously thought. An international team led by researchers from the Max Planck Institute for Nuclear Physics has for the first time observed intermolecular Coulombic decay in organic molecules, which is triggered by ionising radiation such as from radioactivity or from outer space. The effect damages two neighbouring molecules and ultimately leads to the breaking of bonds, as they also exist in DNA and proteins. The finding not only improves the understanding of radiation damage, but could also help in the search for more effective substances to support radiation therapy.

Sometimes radioactive damage cannot be heavy enough – namely when it comes to destroying tumour tissue with ionising radiation. Therefore, substances are used in radiotherapy that specifically enhance the radiation damage in tumour tissue. “The intermolecular Coulombic decay we found could help to make such sensitisers more effective,” says Alexander Dorn, research group leader in the Pfeifer division at MPIK, who was significantly involved in the current study. His team's observations could also improve our understanding of how artificial or natural ionising radiation damages the genetic material of healthy tissue.

The DNA double helix of the genome resembles a rope ladder with rungs of nucleic base pairs. “Since experiments with the free nucleic bases are difficult, we first studied pairs of benzene molecules as a model system,” explains Alexander Dorn. These hydrocarbon rings are connected to each other in a similar way as the nucleic bases stacked on top of each other in the DNA chain. The researchers bombarded the benzene pairs with electrons, in a sense imitating radioactive radiation. When an electron hit a benzene molecule, it was ionised and charged with significant energy. Now the team observed that the molecule transferred part of this energy to its partner molecule with high probability. This energy boost was enough to ionise the second molecule as well, so that now both molecules were positively charged. Of course, this did not last long: the two molecular ions repelled each other and flew apart in a Coulomb explosion.

Until now, it was assumed that ionising radiation mainly damages biomolecules indirectly. The high-energy radiation also ionises the water of which a cell is largely composed and which surrounds biomolecules such as DNA. The ionised water molecules, especially hydroxide ions, then attack the DNA. And if an electron of beta radiation or a gamma quantum does directly hit a DNA molecule, the excess energy is always dissipated by processes in the molecule itself, so that it remains intact – according to the previous assumption. The weak bonds between different molecules or different parts of the molecule, as they exist in DNA or in proteins, should not be affected by this. In contrast the scientists observed with their reaction microscope that radioactive radiation can indeed break such bonds. Using this instrument, they can not only catch the two benzene molecules flying apart and measure their energy, but also characterise the emitted electrons.

“How intermolecular Coulombic decay affects the DNA strand is not yet clear,” says Alexander Dorn. If a single strand in the DNA rope ladder breaks, it should not be serious. On the other hand, the observed mechanism also releases several electrons that can break further pairs of molecules. If both strands of the DNA break in the immediate vicinity, this can very well have fatal consequences.

In order to better assess the effect of radioactive radiation on the genetic material, his team will now also bombard pairs of nucleic bases with electrons in the reaction microscope. “This is experimentally challenging because we have to heat the nucleic bases to vaporise them,” explains Dorn. “But too much heat will destroy them. ” In addition, nuclear physicians can follow the trail to more effective sensitisers that the team has laid with the detection of intermolecular Coulombic decay. The new mechanism could therefore be relevant for both cases of radiation damage: those that need to be avoided as much as possible and those that should be as heavy as possible.