A universal language for the world 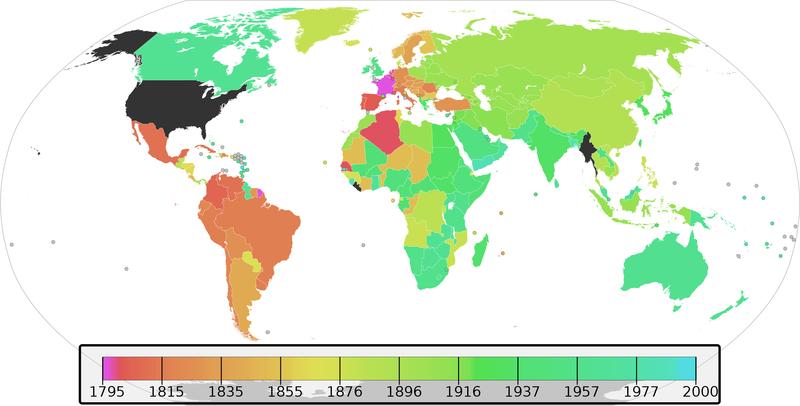 The metric system was introduced in Germany 150 years ago.

The world can sometimes reach a consensus. At least when it comes to measuring things. Today, it seems obvious to us to measure distances in meters, electric current in amperes and weights in kilograms. The story of this global achievement started with the French Revolution at the end of the 18th century. The French Revolution set many things in motion, it abolished some others, and it led to the creation of many new things too. This was also when the meter and the kilogram saw the light of day. These were the two units that helped the metric system to become globally successful and to eventually replace the utter confusion of ells and feet, pounds and barleycorns. It still took about three quarters of a century for this notion of a uniform measurement system (“À tous les temps, à tous les peuples” / “For all times, for all peoples”) to finally establish itself. Three years before the first seventeen nations signed the Metre Convention and committed themselves to this measurement system on an internationally coordinated basis, the metric system was already being introduced in Germany. On 1 January 1872, the Maß- und Gewichtsordnung des Deutschen Reiches (The ordinance on weights and measures of the German Empire) came into force and established the meter and the kilogram to replace the weights and measures that had been used previously, some of which dated back centuries.

Introducing a uniform measurement system that was acceptable throughout the world was far less a scientific achievement than a political one. Whereas the previous systems of units reflected the regional balances of power (as demonstrated by the various princely ells), the metric system won people over by being universally acceptable. The base unit of the system, the meter, was not related to any individual ruler, but to planet Earth. This was made clear during the years of the French Revolution, when two astronomers accomplished the mammoth task they had been given of measuring the circumference of the Earth. After years of triangulating the section of a meridian crossing the city of Paris (i.e., the distance between Barcelona and Dunkirk), they finally presented their results in what was then a common unit in France, the ligne. Since it was relatively easy to measure the whole length of lines of latitude by means of astronomic measurements, it was possible to extrapolate the total circumference of the Earth based on the partial result obtained in years of arduous work. And a fully new unit of length was derived from this circumference: the meter – which was defined as the forty millionth part of our planet’s circumference that was measured in this way.

The meter is not only the SI unit of length, but it also gives its name to both the metric system and the agreement concluded between certain states in 1875, the Metre Convention. Among the first signatory states to the Metre Convention were the German Empire and Bavaria – which was then incidentally a monarchy. Following the Metre Convention, the member states progressively started setting up national metrology institutes that were in charge of implementing the metric system in each nation. The first institution of this kind was the Physikalisch-Technische Reichsanstalt (PTR), which was founded in Berlin in 1887. This was the predecessor of the Physikalisch-Technische Bundesanstalt (PTB), which is the second largest metrology institute in the world today – and an important voice in international metrology.

The Metre Convention now has more than 100 member states and associate states. And all these countries have a common metrological language whose base units are still the meter, the kilogram and the second. Other base units have been added to the International System of Units (SI) over the past 60 years to create a system of units for the whole world. These units are the ampere (for electric current), the kelvin (for temperature), the candela (for luminous intensity) and the mole (for the amount of substance).

This system of units has fully established itself in the scientific community, nearly everywhere in the economy and even in our everyday measurements. The fact that Anglo-Saxon countries, above all the United States of America, have not yet put the SI into national law and are still using the traditional imperial units of pounds, miles and Fahrenheit is one of the anecdotes about this huge unifying movement. But all hope is not lost as American metrologists tell us this, “We are approaching the SI system, inch by inch.”
(jes/PTB)