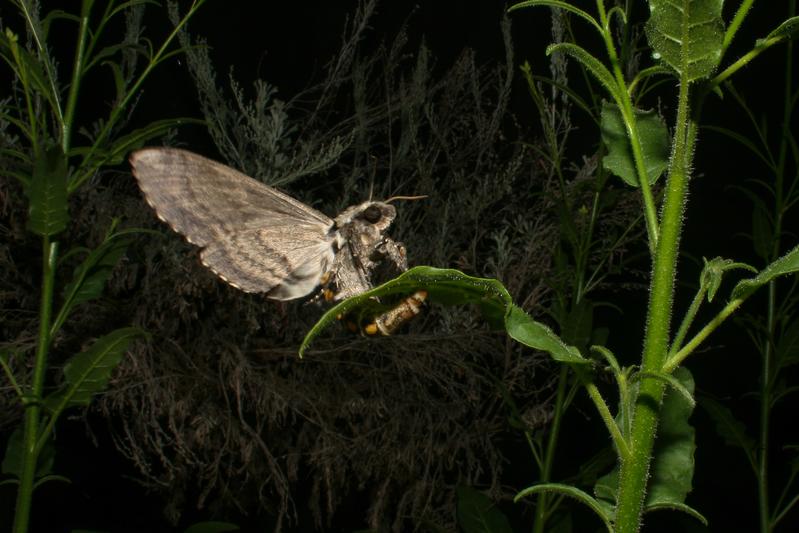 Tobacco hawkmoths (Manduca sexta) show an unusual preference for Datura plants that are already infested with leaf beetles when laying their eggs. The beetles and their larvae actually compete with tobacco hornworms, the larvae of Manduca, for food. Plants infested by beetles change their odor profile and increase the production of the substance alpha-copaene, making them, however, more attractive to tobacco hawkmoths. Despite food competition, tobacco hornworms seem to benefit from their mothers’ choice of such host plants because in the presence of beetles and their larvae they are better protected from parasitic wasps that avoid beetle-infested plants.

A research team at the Max Planck Institute for Chemical Ecology has found that gravid tobacco hawkmoths (Manduca sexta) show an unusual preference for Datura plants that are already infested with leaf beetles when laying their eggs. The beetles and their larvae actually compete with tobacco hornworms, the larvae of Manduca, for food. Plants infested by beetles change their odor profile and increase the production of the substance alpha-copaene, making them, however, more attractive to tobacco hawkmoths. Despite food competition, tobacco hornworms seem to benefit from their mothers’ choice of such host plants because in the presence of beetles and their larvae they are better protected from parasitic wasps that avoid beetle-infested plants. The researchers were also able to identify the tobacco hawkmoths' olfactory receptor that controls this behavior (Current Biology, doi: 10.1016/j.cub.2021.12.021).

By choosing the best possible oviposition site, many insects set the course for the best possible development of their offspring: There should be enough food available and the larvae that hatch from the eggs should be as safe as possible from pathogens and predators. In an earlier study, the research team led by Markus Knaden and Bill Hansson from the Department of Evolutionary Neuroethology had already been able to demonstrate that tobacco hawkmoths avoid laying their eggs on plants where they smell the feces of their conspecifics. "This is apparently their way of avoiding food competition. Therefore, we wondered whether the moths also avoid plants infested by other herbivorous insects," first author Jin Zhang summarizes the question of the current study.
However, behavioral experiments with sacred datura (Datura wrightii), which were infested by the three-lined potato beetle Lema daturaphila, resulted in an unexpected surprise: Quite obviously, female tobacco hawkmoths even preferentially laid their eggs on these Datura plants, compared to plants that were not infested by the beetles.
"To be honest, we were a little frustrated at first because we had expected the experiments to confirm our initial hypothesis, namely that egg-laying tobacco hawkmoths avoid food competitors. In our case, however, the unexpected observation suddenly made sense when we realized that beetle-infested plants smell quite differently and that parasitoid wasps, which often use plant odors to find their host insects, are less efficient at detecting tobacco hornworms on beetle-infested plants," explains study leader Markus Knaden.

In nature, it is not always possible to avoid all dangers and at the same time select a place with abundant food. For example, studies suggest that up to 90% of Manduca sexta caterpillars are parasitized by the wasp Cotesia congregata. This parasitoid wasp lays its eggs in the caterpillars and transmits pathogens. Parasitized tobacco hornworms usually die, when the wasps’ offspring hatches.

The researchers used this knowledge to study the seemingly strange behavior of the tobacco hawkmoths in more detail. They analyzed the odor Datura plants emit when they are infested by three-lined potato beetles and compared it with control plants without infestation. And, finally, they noticed an unusual increase of the substance alpha-copaene in the plants' odor bouquet.

How the moths detect and process this odor was the next question the team answered. Since tobacco hawkmoths have about 70 odorant receptors that would be potential candidates for detecting alpha-copaene, it would have been very time-consuming to test them all individually. Instead, a combination of complex molecular methods allowed the scientists to reduce the number of candidates from about 70 to 6, and finally identify Or35 as the odorant receptor activated by alpha-copaene and probably involved in oviposition.

The researchers also examined the odor-guided behavior of the parasitoid wasps. Choice experiments in which the wasps could choose between two odors revealed, on the one hand, that Cotesia congregata wasps preferred the odor of plants on which tobacco hawkworms were feeding to control plants. On the other hand, these behavioral assays also demonstrated that the wasps avoided the odor of plants that were infested by Lema daturaphila beetles. These results were confirmed by assays in an experimental tent containing Datura plants infested only by tobacco hawkmoths or by tobacco hawkmoths and beetles. Wasps also avoided plants with beetles in this setting.

Although the development of tobacco hornworms on plants that are additionally infested by beetles is impaired in comparison to the development of caterpillars on non-infested plants, the mother moths accept this disadvantage when laying their eggs. The advantage of protecting their offspring from parasitic wasps must therefore outweigh the disadvantage of food competition. Such cost-benefit trade-offs play a significant role in many ecological interactions. "Our results show that in nature, simple explanations are often not sufficient. Tobacco hawkmoths do not only have to take into account, whether a plant is a good food substrate for their offspring, but also whether potential competitors are already present, and whether the presence of these competitors could even help to hide from predators," Bill Hansson summarizes the results.

Why Datura plants emit different odor depending on the insects that feed on them will be addressed in further studies. Both Manduca sexta caterpillars and the larvae of the three-lined potato beetle Lema daturaphila are chewing insects and cause similar damage to plant tissue. Presumably, microorganisms in the oral secretions of the animals play a role. Interdisciplinary approaches that also focus, for example, on the role of microorganisms in these complex interactions may help to uncover further exciting aspects of the multifaceted interactions between living organisms.