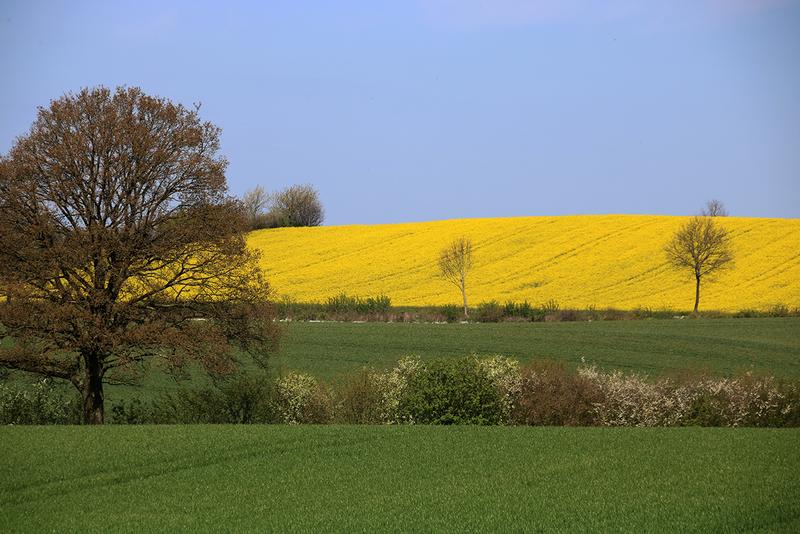 Northern and Western Europe are characterized by hedge landscapes. A Europe-wide study, in which the University of Bremen is involved, has investigated the effect of the climate and care on biodiversity in said hedges. The result: Climate change has an effect here too.

In Northern and Western Europe, hedges often cover landscapes that are lacking forests like a tight net. Otherwise isolated habitats, such as forests, are connected to each other by the hedges. Many forest plant types, such as wood anemone, greater stitchwort, and adder's root, have created their habitat within hedgerows, as they offer conditions similar to forests. In many European locations, hedge landscapes have been important for many centuries. They are living fences as well as providers of wood and nutrition. They offer efficient protection against wind and are highly valuable in terms of nature conservation and recuperation. Hedges are also culturally significant, especially in England or Northern France for example, where they shape the landscape.

However, hedges are in danger. Climate change and unsuitable care have serious effects on the biodiversity in hedges. That is the result of a study in which researchers from four European countries put together a unique dataset. The data contains the vegetation data from more than 1,000 hedge maps along a route from Southern Sweden to Northern France. Additionally, information concerning the regional climate, the surrounding landscape, and the hedgerow care routine was collected, in order to connect the number and frequency of forest plant occurrences to this.

Hedges - An Important Alternative Habitat for Many Species

“We have shown that a great selection of forest plant species are able to live in European hedges. Thus, hedges, especially in areas lacking in forest, offer an important alternative habitat for many species,” says the ecologist Kathrin Litza from the University of Bremen. She carries out research on the distribution pattern of herbaceous plants, especially in forests and related habitats, at the Institute of Ecology. In her doctoral dissertation, she is concentrating on herbaceous species in hedgerows in Schleswig-Holstein and the change in species composition over time. “In our comprehensive project, we have proven that the species composition varies according to the region. However, superordinate patterns were still found.”

Frequently occurring forest species are particularly good at spreading out over large areas, for example by means of animals or wind. They can also better tolerate extreme disturbances (for example stemming from care measures) as well as high temperatures in comparison to rarer species. Additionally, the use of the adjacent areas has been shown to be relevant for the biodiversity. When there is intense agricultural usage - for example as farmland - less species were found than when the adjacent areas are paths or even forests.

The regional climate has been proven to play a significant role in biodiversity. Less forest species were found in the hedges in warmer regions. The great influence of extreme weather occurrences was particularly revealing. Hedges that have been exposed to extreme drought or heat over years, have been shown to contain less species. “As such weather occurrences will increase due to climate change, we fear that even more hedges could lose species in the future,” explains Kathrin Litza.

Wider Hedges as a Reaction to Climate Change

As hedges are small in comparison to forests, there are stronger fluctuations in temperature and humidity within. Yet it is possible to influence this effect with the width of the hedge: “The inner climate of wider hedges has been proven to be more stable than that of small ones,” states the Bremen ecologist. The positive influence of wide hedges has already been shown in regional studies. Now, the Europe-wide study has also confirmed that wide hedges can house far more forest species. As extreme weather occurrences will increase in the future, the researchers demand that care measures and management strategies are amended on a European level. Kathrin Litza: “It is essential that the width of the hedges is considered a key element for biodiversity.”

The publication can be read and downloaded for free until January 27, 2022, at:
https://authors.elsevier.com/a/1eD8ZcA-IgJnC