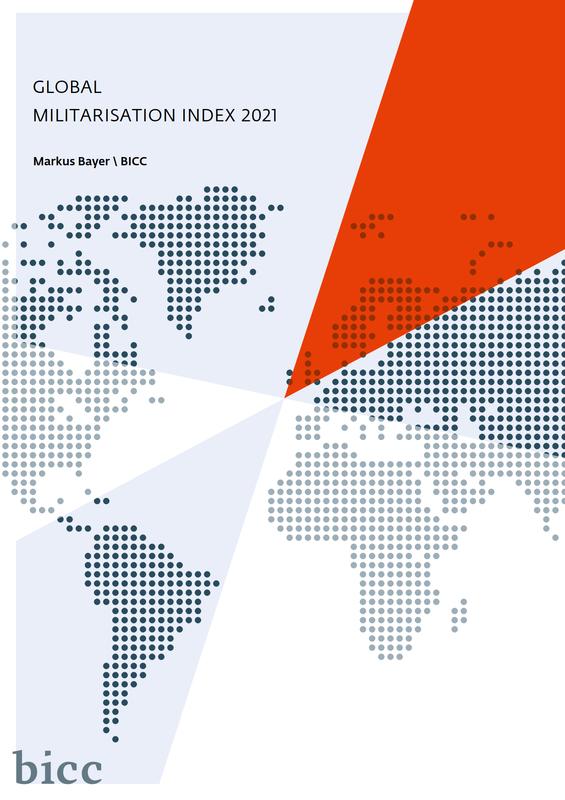 Even though the pandemic had a strong impact on the gross domestic product in some countries, militarisation increased in the majority of countries worldwide and across Europe compared to the previous year. This is the outcome of the Global Militarisation Index (GMI) 2021 issued by BICC (Bonn International Centre for Conflict Studies), which annually depicts the relative weight and importance of the military apparatus of one country in relation to its society as a whole. In its ‘anniversary edition’, the GMI 2021 discusses the global and regional development of militarisation over the past two decades and concludes: Militarisation has been on the rise since 2019.

The ten countries with the highest levels of militarisation in the GMI 2021 are Israel, Oman, Azerbaijan, Kuwait, Armenia, Saudi Arabia, Brunei, Bahrain, Singapore and Russia. These countries allocate particularly large amounts of resources to the military in comparison to other areas of society.

Azerbaijan exhibits by far the strongest trend in militarisation worldwide. In the ranking, it rose from position 12 (GMI 2020) to position 3 (GMI 2021). In 2021, its Δ GMI value is at 54.5. Armenia, too, continues to be among the Top 10 (position 5, Δ GMI value of 1.4). In his analysis, Markus Bayer points to the military conflict of the Caucasus countries over Nagorno-Karabakh, which escalated in 2020. “Both countries have rearmed significantly over the past few years and, in 2020, invested 4.9 (Armenia) and 5.4 per cent (Azerbaijan) of GDP in their military. Besides Russia, Israel and Turkey supplied arms to them”.

One regional focus of the GMI is Europe. Among the Top 20 worldwide are the two EU member states: Greece (position 14) and Cyprus (position 15), as well as Russia (position 10) and Ukraine (position 16). In the regional focus, one overall trend of the GMI 2021 becomes particularly clear: “Despite the decrease in global GDP as a result of the COVID-19 pandemic, countries are spending more resources on the military in absolute terms and as a proportion of their economic output”, Markus Bayer comments. “Germany is not excluded from this, either”, the author adds. Thanks to its strong economy, the country only ranks 103rd in the GMI. But with US $52.76 billion, it invested US $3.75 billion more in its armed forces in 2020 than it did in the previous year. Measured as a share of GDP, this represents an increase from 1.3 to 1.4 per cent.

Another regional focus is on Sub-Saharan Africa. In West Africa, in particular, the security situation over the past few years has deteriorated dramatically. “Alongside relatively stable countries in Sub-Saharan Africa, such as Botswana, Namibia, Mauritania, Angola, Gabon and Guinea-Bissau, countries with current violent conflicts, such as Chad, South Sudan and Mail can be found among the Top 10”, Markus Bayer sums up.

Global and regional development of militarisation in the past 20 years

The second part of the ‘anniversary-GMI 2021” looks at global and regional militarisation of the past two decades for which BICC researchers have collected data since the year 2000. Except for an interim peak in 2005, militarisation fell significantly and steadily until 2018. “The growth of the world's population and the global financial resources cause the share of the military sector in the GMI to decrease from 2000 to 2018”, explains Markus Bayer. This, however, does not imply “true demilitarisation”, as is evidenced by the absolute increase in military spending over the period under review (SIPRI, 2020). Summing up, Markus Bayer states: “Since 2019, this trend has reversed again. In the past two years, rising militarisation can be observed again across the globe, which is mainly due to the fact that the resources allocated to the military are not only increasing in absolute but also in relative terms.“
The GMI 2021 covers 153 states and is based on the latest available figures (in most cases data for 2010). The index project is financially supported by Germany's Federal Ministry for Economic Cooperation and Development.