At operating temperature: statistical characterization of semiconductor qubits at 2 Kelvin 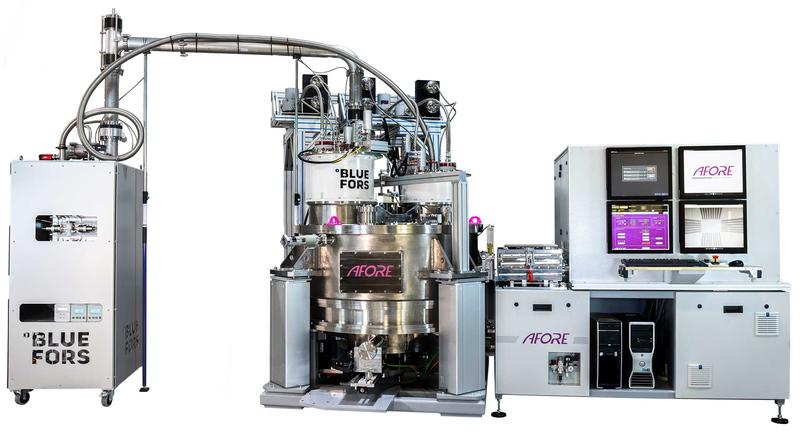 Starting in 2022, researchers at Fraunhofer IAF plan to present statistical data on the variance of qubits generated with different semiconductor technologies for the first time in Europe. For this purpose, the institute will acquire a novel on-wafer prober with the support from the BMBF, which can characterize more than 200 devices simultaneously at qubit operating temperatures of less than 2 Kelvin. The obtained data are essential for the establishment of a European value chain for industry-scale fabrication of quantum computers on a solid-state basis.

The Fraunhofer Institute for Applied Solid State Physics IAF is deepening its know-how in the fields of quantum computing and cryogenic measurement technology: in the course of the project KryoproPlus, the Institute will acquire an automatic wafer prober with which researchers can statistically measure quantum bits (qubits) on a large scale at cryogenic temperatures of less than 2 K. The new data basis will provide reliable information on the scalability of quantum processors. Within its framework program “Quantum Technologies—from Fundamentals to Market,” the German Federal Ministry of Education and Research (BMBF) is funding the acquisition of the novel system as well as the development of corresponding expertise over a period of two years.

“Our goal is to support the industrial production of quantum processors sustainably. To this end, we are providing a measurement system with which we can measure many qubits simultaneously at very low temperatures,” sums up the project manager of KryoproPlus, Prof. Dr. Rüdiger Quay. He is confident that the expertise of the institute in the field of cryogenics as well as the networking of Fraunhofer IAF can achieve an efficient transfer of the findings into economic application and further scientific research.

Obtaining statistical data to improve and scale qubits
A fundamental requirement for quantum computing is the entanglement and selective control of qubits. Even the smallest inequalities in the hardware impair entanglement. In addition, semiconductor qubits must be isolated and cooled down to temperatures close to absolute zero (-273.15 °C) if they are to be measured or manipulated for computing operations. Only under these cryogenic temperatures, semiconductor-based qubits behave stably enough to allow entanglement at all.

In order to minimize and ultimately eliminate disparities during fabrication, qubits must first be tested extensively and innovatively. Only on the basis of a statistically relevant set of data, valid statements about their properties can be made. The development of scalable manufacturing processes depends on these insights.

Throughout Europe, Fraunhofer IAF already holds a good position in the field of characterizing measurement techniques of solid-state-based qubits at cryogenic temperatures. Until now however, only separate measurements of qubits on small wafers with a diameter of up to 50 mm at cryogenic temperatures have been possible. The automatic on-wafer prober to be acquired, on the other hand, will enable for the first time to record the properties of a significantly higher number of qubits on wafers with diameters of 200 mm or 300 mm in a stable, reproducible and simultaneous manner at below 2 K. The aim is to be able to characterize more than 200 components per wafer and 10 to 100 wafers in one campaign with a measurement time of less than 10 hours per wafer.

Researchers will be able to use the system to compare, for example, the performance of qubits based on silicon-germanium quantum dots with those made of pure silicon quantum dots, and thus determine the influence of different fabrication processes on the variances of qubits. “The project also aims to gain a quantitative understanding of how the influencing factors material epitaxy and process affect the variance of qubits,” explains Professor Quay. With the help of these data, the advantages and disadvantages of different qubit technologies can be assessed more accurately and the homogeneity of qubits can be effectively improved, ultimately paving the way from the laboratory to quantum computing applications.

Contribution to the technological sovereignty of Europe

Both the Federal Republic of Germany and the European Union (EU) have been investing heavily in the research and development of quantum technologies since 2018. Quantum computing is considered to be one of the potentially disruptive technologies of the 21st century, enabling breakthroughs in various areas like the Internet of Things (IoT) and Artificial Intelligence (AI). As a result, it could revolutionize application areas such as medicine (digital patient), communication (“machine-to-machine”, M2M; “collaborative robots”, cobots), and traffic (autonomous driving).

With KryoproPlus, Fraunhofer IAF contributes significantly to the fundamental work for establishing a European value chain for industry-scale fabrication of quantum computers. Through further projects in the field of quantum computing as well as scientific publications, the Freiburg-based research institute ensures the necessary knowledge transfer to industry as well as within the scientific community.

The project KryoproPlus is funded by the German Federal Ministry of Education and Research (BMBF).

The Fraunhofer Institute for Applied Solid State Physics IAF is one of the world's leading research institutions in the fields of III-V semiconductors and synthetic diamond. Based on these materials, Fraunhofer IAF develops components for future-oriented technologies, such as electronic circuits for innovative communication and mobility solutions, laser systems for real-time spectroscopy, novel hardware components for quantum computing as well as quantum sensors for industrial applications.
With its research and development, the Freiburg research institute covers the entire value chain - from materials research, design and processing to modules, systems and demonstrators.