In search of (un)desired side effects 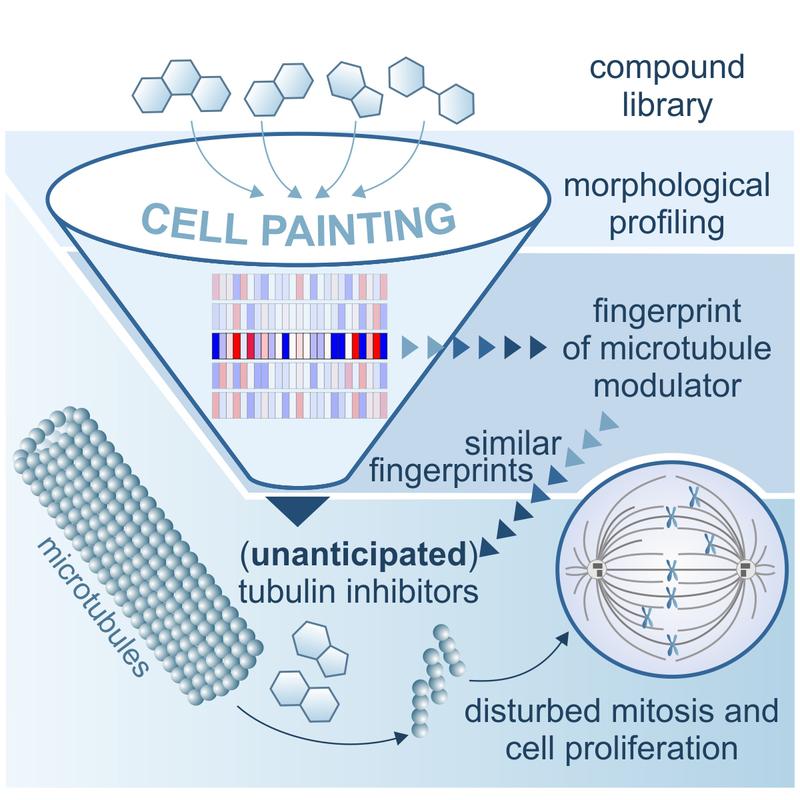 Pharmaceutical researchers speak of a hit when they come across a promising substance with a desired effect in early drug discovery. Unfortunately, hits are rarely bull's-eyes, often showing undesirable side effects that not only complicate the search for new hits, but also the subsequent development into a drug. A new study by Slava Ziegler and Herbert Waldmann from the Max Planck Institute of Molecular Physiology in Dortmund could now help to better identify one of the most frequently observed side effects already in early drug discovery, but also to find new bioactivities.

The most commonly used cancer drugs contain active substances that manipulate the cell's cytoskeleton by binding to microtubules. This can disrupt cell division as well as impair other essential processes, and leads to cell death. Such an effect is of course not desirable for other therapies. However, microtubules’ surface has many deep binding pockets that makes them particularly susceptible to modulation by a wide variety of chemical substances with diverse chemical scaffolds.

Drug discovery is biased
In the search for and development of new active substances, the study of known side effects plays a crucial role, especially when one considers that about 13 years and more than one billion US dollars are needed to develop a new drug. Although there are already standardized test procedures (screens) for identifying undesirable side effects, they by far do not cover all targets in cells, often do not correctly reflect the cellular context or targets could be overlooked, e.g. binding to tubulin. Thus, drug search is always biased to a certain extent.

Painting in cells
A team led by Slava Ziegler and Herbert Waldmann used a new strategy to reliably detect side effects, such as the disruption of microtubules, at an early stage of the search for bioactive compounds. To do this, the researchers employed the so-called "Cell painting" approach. Here, several functional areas of the cell are stained and then examined microscopically for changes after the addition of chemical substances. This enables recording hundreds of cellular parameters in a single morphological fingerprint. If one detects similarity of this fingerprint to those of known reference substances, conclusions about the effect of the unknown substance can be drawn. The value of this approach lies in the possibility of creating fingerprints for thousands of substances in a high-throughput process. This way, the researchers revealed that more than 1% of about 15,000 studied substances had a tubulin-modulating effect. Among them was also a large number of known reference substances for which an influence on tubulin was previously unknown.

Useful add-on for drug development
"Reference substances play an essential role in the interpretation of a screen, so they should be carefully evaluated and tested. The compounds identified by the Cell painting show a wide variety of chemical scaffolds and even small chemical modifications can have a dramatic impact on the tubulin-binding properties of a compound. This risk is ubiquitous, especially during the compound optimization phase, where existing atoms are exchanged or removed and new atoms are added in order to improve the pharmacological properties. Additional morphological profiling during the search for hits and their optimisation could not only help unmask side effects such as tubulin modulation early on, but also identify desired and new bioactivities," says Slava Ziegler. "Moreover, this approach could save time and money as it helps to early assess whether a promising substance has what it takes to become a useful compound or not."