OECMs: new instrument for the protection of biodiversity 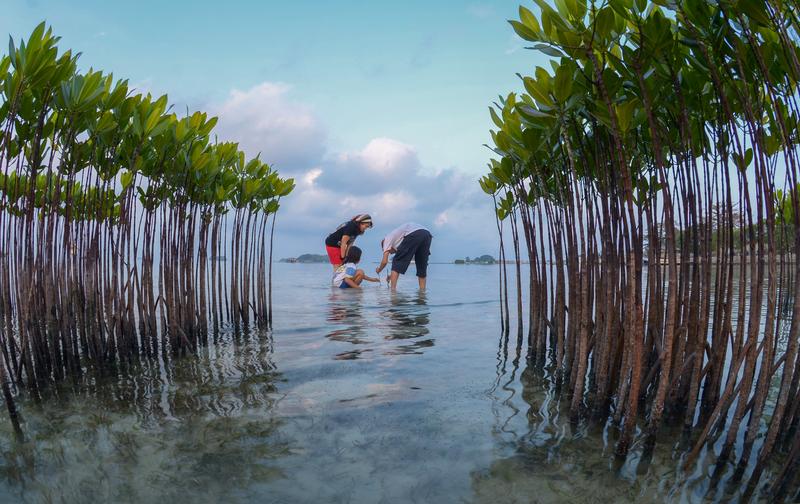 The Biodiversity Conference has set a goal to place at least 30% of land and marine areas and their species richness under protection by 2030. OECMs are alternative forms of protection that could be crucial to conserve the diversity of the planet's species in addition to nature reserves. A new study involving the Leibniz Centre for Tropical Marine Research (ZMT) has mapped coastal and marine areas in Indonesia that could be recognized as OECMs. The study will serve as a basis for decision-making by the Indonesian government.

Human impacts and climate change are threatening biodiversity at a critical scale. To preserve biodiversity on our planet, protected areas are the most widely used tool. However, they alone are not enough to halt the loss of species.

One critical way to contribute to species conservation beyond protected areas is through OECMs. The acronym stands for "other effective area-based conservation measures." These are, for example, areas that are sustainably managed by indigenous peoples, local communities or the private sector. In many cases, this is done in ways that are based on values and traditions of the region. OECMs differ from protected areas in that conservation is not defined as a top priority, but occurs as a side effect of action.

Currently, less than 1 % of terrestrial and freshwater areas and less than 0.1 % of marine areas worldwide are recognized as OECMs. In most cases, reliable information on the forms and numbers of potential OECMs is lacking. An international team of scientists led by the ZMT has now published a study that fills this knowledge gap for Indonesia's coastal waters.

Situated in the so-called Coral Triangle, the Indonesian archipelago with its more than 17,000 islands is a leader in terms of species diversity in the adjacent seas, but also has a diversity of cultures with traditional forms of marine resource use.

The researchers identified more than 390 areas that have been managed - in some cases for centuries - by local communities, the government or the private sector, and represent potential marine OECMs. These areas have very different management objectives, such as traditional sustainable fisheries, cultural purposes, or nature-based tourism.

For example, local traditional practices include "sasi", where certain species or areas are not allowed to be fished for a certain period of time. In the private sector, tourist resorts can also contribute to species conservation, such as one in Raja Ampat that has worked with local people to establish a huge shark sanctuary.

"Indonesia has improved the extent and management of marine protected areas, yet they cover less than 8% of the country's coastal waters," said Estradivari, a marine biologist at ZMT. "This means that 92% of Indonesia's coastal seas need other measures to protect their biodiversity and maintain the productivity of marine resources."

The Indonesian government is currently in the process of developing a framework for recognizing areas as OECMs to achieve national and international conservation goals. The results of the study will assist the government in this process. Staff from the relevant ministries were involved in the preparation of the study.

"OECMs also reduce social conflicts and recognize the conservation contribution of local and indigenous communities, which is often not taken into account in official conservation measures," says Sebastian Ferse, a reef ecologist at the ZMT and co-author of the study. "This allows them to preserve their lifestyles and livelihoods and get the government support they need to protect the resources they depend on."