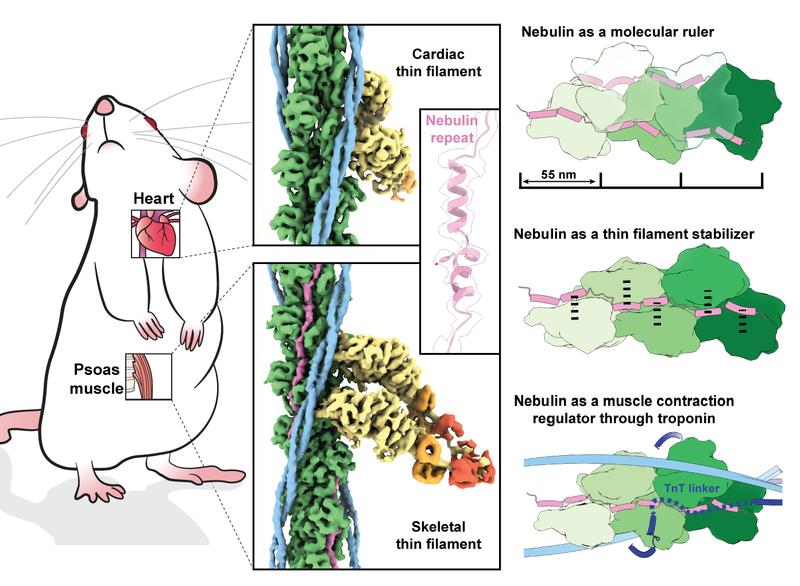 Scientists have obtained the first high-resolution 3D image of nebulin, a giant actin-binding protein that is an essential component of skeletal muscle. This discovery has brought to light the chance to better understand the role of nebulin, as its functions have remained largely nebulous due to its large size and the difficulty in extracting nebulin in a native state from muscle. The team of Max Planck researchers, led by Stefan Raunser, Director at the Max Planck Institute of Molecular Physiology in Dortmund, in collaboration with Mathias Gautel at King's College London, used electron cryo-tomography to decipher the structure of nebulin in impressive detail. Their findings could lead to novel therapeutic approaches to treat muscular diseases, as genetic mutations in nebulin are accompanied by a dramatic loss in muscle force known as nemaline myopathy.

An elusive protein
Skeletal and heart muscles contract and relax upon sliding of parallel filaments of the proteins myosin and actin. Nebulin, another long slender protein, which is present only in skeletal muscle, pairs up with actin, stabilising and regulating it. Mutations in the gene encoding nebulin can produce an abnormal nebulin that causes nemaline myopathy, an incurable neuromuscular disorder with various degrees of severity, from muscle weakness to speech impediments and respiratory problems.

Knowing the structure of nebulin and how it interacts with actin could be pivotal to the development of new treatments. But traditional experimental approaches that reconstitute nebulin in vitro have failed because of the size of the protein, its flexibility, and the fact that it is intertwined with actin. Raunser and his team take a different approach: they visualise these proteins directly in their native environment, the muscle, by using a powerful microscopy technique called electron cryo-tomography (cryo-ET). A cryo-ET experiment in the Raunser lab begins with flash-freezing muscle samples. Then, scientists apply a gallium-based ion beam to the sample to shave away extra material from it and reach an ideal thickness of around 100 nanometres for the transmission electron microscope. This powerful tool then acquires multiple images of the sample tilting along an axis. Finally, computational methods render a three-dimensional image at an impressively high resolution.

Pushing the limits of cryo-ET
In a 2021 publication [LINK], the Max Planck researchers produced the first detailed 3D image of the sarcomere, the basic contractile unit of skeletal and heart muscle cell that contains actin, myosin and, eventually, the nebulin protein. The resolution of one nanometre (a millionth of a millimetre) was good enough to image actin and myosin but too low for visualising nebulin. This time, the team improved their data acquisition and processing pipeline to obtain a 3D picture of skeletal muscle filaments at near atomic resolution (0.45 nanometres). By comparing the images of the skeletal muscle with the nebulin-free cardiac muscle, the structure of the long nebulin protein became distinct and the researchers were able to build an atomic model of nebulin. “This is the first high-resolution structure using FIB-milling and cryo-ET and it proves that we can reach atomic models in a reliable way. It’s a quantum leap!”, says Raunser.

The findings reveal that each nebulin repeat binds with an actin subunit, demonstrating nebulin’s role as a ruler that dictates the length of the actin filament. Besides, each nebulin repeat interacts with every neighbouring actin subunit, which explains its role as a stabiliser. Finally, the scientists propose that nebulin regulates the binding of actin and myosin, and hence muscle contraction, by interacting with another protein called troponin. Experiments were done on mouse muscles that are very similar to the human ones - and were isolated at King's College London.

“We obtained a detailed in situ 3D structure of nebulin, actin and myosin heads that can be used to pinpoint the mutations leading to myopathies,” notes Raunser. Pharmaceutical developers can then take advantage of this new structure to locate binding sites for small molecules of pharmaceutical interest, he adds. Driven by their recent success, the group will now concentrate on unveiling the structural details of myosin, the other sliding filament. Such findings could finally help paint the complete picture of the intricate details behind skeletal muscle contraction.