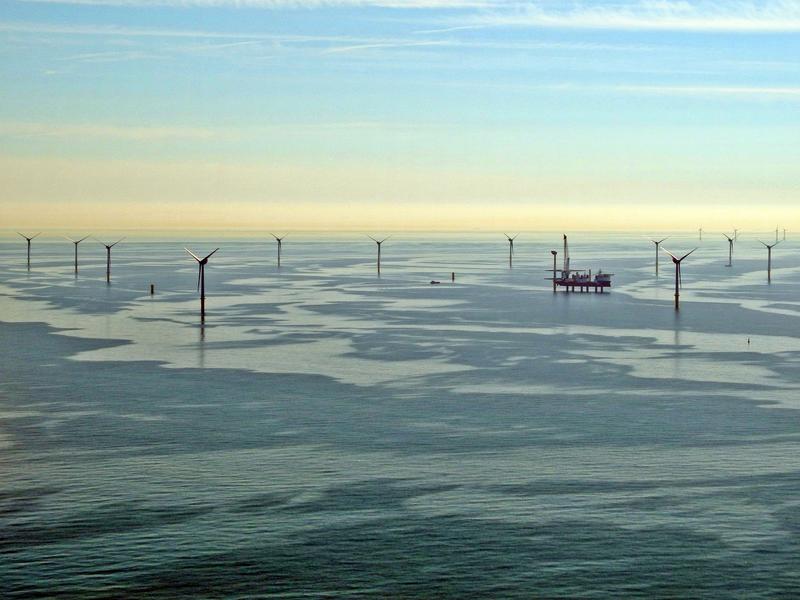 A team around Nils Christiansen published a research paper about the impacts offshore wind farms have on the ocean dynamics. The moderation of the windspeed and associated changes in the physical conditions of the affected North Sea areas embody the main focus of the study. Just as the wind turbines create obstacles for water and air. The effects are vastly important regarding the schedule for further offshore wind farms. The study was published in the journal Frontiers in Marine Science.

The impressive photographs of the North Sea’s offshore wind farms with a view of the glittering water are firmly etched in people's minds. Like the lugworm, they already belong to the image we have of the NorthSea. But which invisible interactions and effects go hand in hand with this vital element of Germany's energy transition?

The publication of the Hereon-Institute of Coastal Systems - Analysis and Modeling simulates a windspeed decline on the downwind side (lee side) of the parks. The phenomenon was recently proven by a Hereon team whose study appeared in the scientific journal Nature (Akthar et al., 2021). The turbines initiate the abating windspeed. They extract kinetic energy from the wind field to generate electricity. Downwind of the wind turbines, the so-called atmospheric wakes develop. These are characterised by reduced windspeed as well as specific pressure conditions and enhanced air turbulence. During stable atmospheric circumstances, the wind speed deficits spread up to 70 km behind the wind farms.

When the wind dilutes

Using high-resolution hydrodynamic computer simulations, the team analysed the effects on the southern North Sea for the summer of 2013 (May to September). The analysis shows a link between atmospheric wakes and transformation in the momentum-driven exchange between the atmosphere and water. As a consequence, the horizontal currents and the stratification of the water could be affected. The wake effects are sufficiently potent to redirect the existing currents. This results in shifting mean temperatures and a changed salinity distribution in the wind farm areas. "While the occurring changes remain within the range of interannual variability, they illustrate similar magnitudes as the presumed mean changes due to climate change or year-to-year variability," says Nils Christiansen, from the Hereon Institute for Coastal Systems, who was lead author on the study.

What are the consequences for the North Sea?

"The magnitude of the induced mean changes does not indicate severe local effects, however far-reaching structural changes in the system occur“, says Christiansen.
"The transformation concerning currents and mixing are likely to affect plankton production and the food web structure. As a result it may influence the function of protected areas. Hence it is important to consider these consequences while developing marine protection concepts“, says Hereon Institute Director Prof. Corinna Schrum and provides an outlook for the implementation of the results.Yet, further studies are needed to analyse possible feedbacks on air-sea exchange. A modified exchange potentially affects regional atmospheric conditions and ecosystem dynamics, thus it will be the subject of further studies.

Wissenschaftlicher Ansprechpartner:
Nils Christiansen I Helmholtz-Zentrum Hereon I Institute of Coastal Systems - Analysis and Modeling I T: +49 (0) 4152 87-2132 I nils.christiansen@hereon.de I www.hereon.de