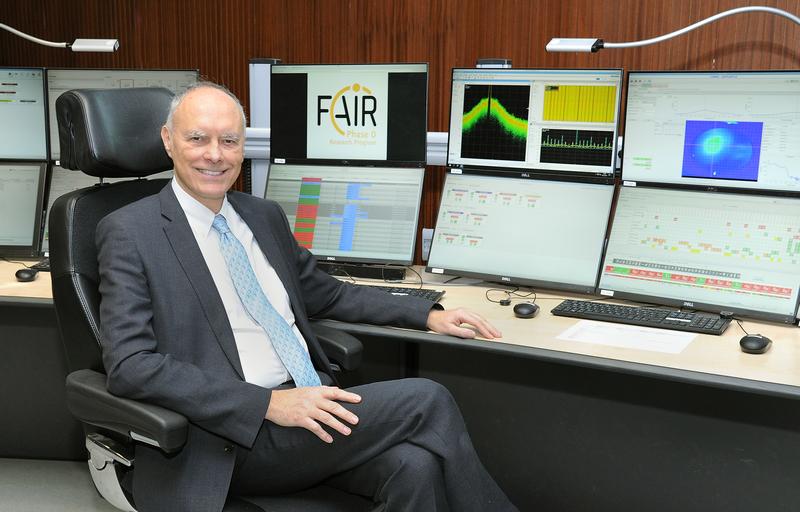 Professor Giubellino will continue to lead the world-class scientific program of GSI and FAIR as Scientific Managing Director of the GSI Helmholtzzentrum für Schwerionenforschung GmbH and the Facility for Antiproton and Ion Research in Europe GmbH (FAIR GmbH) for the next five years. The FAIR Council and the GSI Supervisory Board, impressed by the achievements in his first term, have expressed their wish for him to serve for a second term that started on January 1, 2022.

The FAIR Council and the GSI Supervisory Board are delighted that the international renowned scientist and former CERN experiment leader Professor Giubellino has accepted their proposal to stay in his position as Scientific Managing Director of GSI and FAIR. “We are convinced that with Professor Giubellino's leadership, the GSI/FAIR site will continue to stand for excellent science at the highest international level and will further expand this position in the coming years. The promising preparations of the future research operations at the FAIR facility are the result of the great commitment of the employees of GSI and FAIR, but in particular also his merit. In this context, the excellent research results of FAIR Phase 0 speak for themselves,” emphasized Ministerialdirigent Dr. Volkmar Dietz, who is director at the Federal Ministry of Education and Research (BMBF) and the Chair of the GSI Supervisory Board and the FAIR Council.

Professor Giubellino looks forward to his second term with enthusiastic motivation. “The coming years are decisive for firmly shaping the science at FAIR as one of the top scientific laboratories in the world, involving the wide international FAIR scientific community. FAIR has an enormous potential to produce ground breaking results in a broad range of research areas. For me as a scientist it is a unique opportunity to work for its success”. As important goals for his upcoming term, he names to further define the science opportunities at FAIR and GSI and to create the conditions that the experimenters need for cutting-edge research.

In the recent years, Professor Giubellino led FAIR's scientific program into its first implementation, the so-called FAIR Phase 0, which enabled a restart of on-campus research at GSI/FAIR, allowing the scientific community to reach top science results and to strengthen their attachment to the campus. This first stage of the experimental program has been writing success stories for three years, even under difficult corona conditions: Thanks to the detectors and instrumentation already developed by the large international FAIR collaborations and the improved particle accelerators, it is already possible to enter new physics territory. The scientific output is impressively strong, many scientific milestones have been achieved, and numerous prestigious national and international prizes have been awarded to researchers at GSI and FAIR.

Together with Dr. Ulrich Breuer as Administrative Managing Director and Jörg Blaurock as Technical Managing Director, Professor Giubellino will continue to steer GSI and FAIR. In Professor Giubellino's second term, his focus will be on getting the experiments ready for the start of the FAIR facility. The promotion of young scientists for FAIR will also continue to play a decisive role, in close ties with partner universities in Hesse and Germany, through targeted international agreements and the establishment of support programs to pave the way for highly qualified young scientific and technical personnel to join GSI/FAIR. The international focus and visibility of GSI/FAIR is to be consistently advanced, according to Professor Giubellino, who, in addition to his scientific expertise, has extensive experience with international collaborations and has already assumed many key roles in multilateral research programs.

Since January 2017 Professor Giubellino is Scientific Managing Director of GSI Helmholtzzentrum für Schwerionenforschung GmbH (GSI Helmholtz Centre for Heavy Ion Research) and the Facility for Antiproton and Ion Research in Europe GmbH (FAIR GmbH). The research track record of Paolo Giubellino is the physics of high-energy heavy ion collisions and the matter produced in them. After studying at Turin University and the University of California in Santa Cruz, he took part in many heavy-ion experiments at the European Organization for Nuclear Research CERN in Switzerland. Since the early 1990s, he has held several senior positions at CERN’s ALICE experiment. In 2011 Professor Giubellino was appointed Spokesperson of ALICE. He has also worked at the Torino section of the Italian National Institute for Nuclear Physics (Istituto Nazionale di Fisica Nucleare, INFN) since 1985. For his work he has received numerous awards. Among other things, he received the Lise Meitner Prize of the European Physical Society in 2014 as well as the Enrico Fermi Prize, the highest award bestowed by the Italian Physical Society (2013). He is member of the Accademia delle Scienze di Torino, founded by the famous mathematician and astronomer Joseph-Louis Lagrange. In 2012 the Italian president awarded him the title of “Commendatore della Repubblica Italiana” for his scientific achievements. In 2016 he was elected into the Academia Europaea.